Salvation in Islam (part 2 of 3): Worship and Obey God 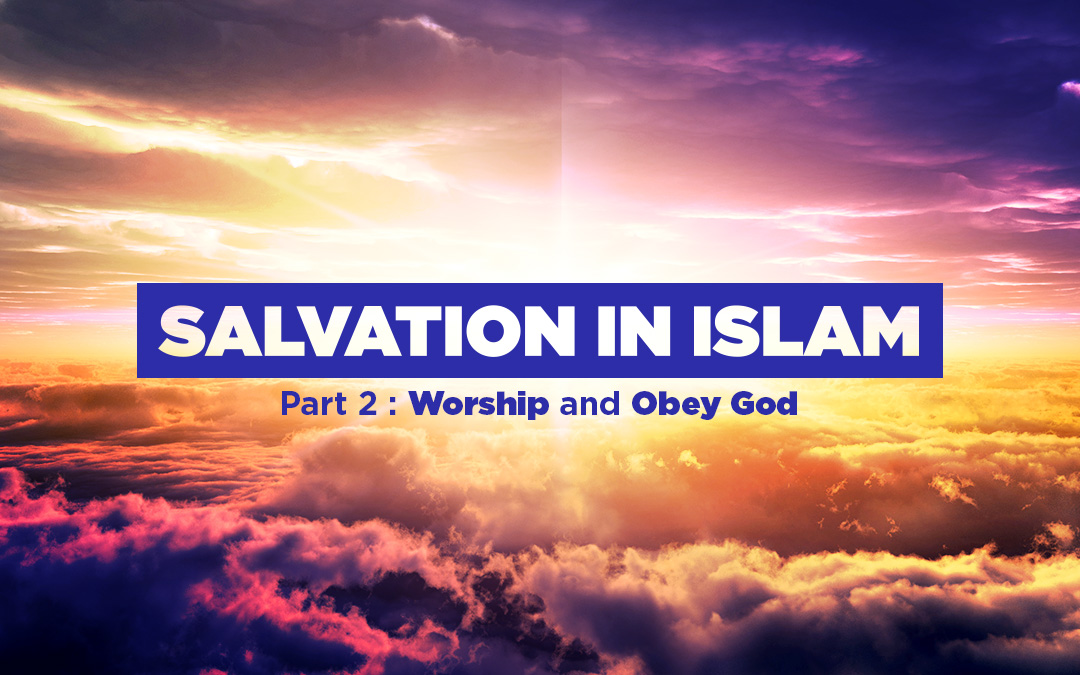 In part 1 of this series ‘Salvation in Islam’, we learnt that salvation is attained by worshipping the One God.  We worship Him alone and we follow His commandments.  We also learnt that Islam does not recognise the concept of original sin, thus Muslims believe that all people are born sin-free.  In the following article we will discuss the Christian concept of atonement, that is, Jesus dying for the sins of humankind, and we will discover that this concept is totally rejected by Islam.  Salvation in Islam is through tawheed, monotheism.

Tawheed is an Arabic word that means oneness, and when we talk abouttawheed in relation to God it means realising and affirming God’s oneness.  It is the belief that God is One, without partner or associate.  There is no god worthy of worship but Allah, and this is the foundation of Islam.  To profess such a belief along with the belief that Muhammad is His messenger is what makes a person Muslim.  To believe in tawheed with certainty is what guarantees salvation.

“Say (O Muhammad): He is Allah (God), (the Unique) One.  Allah, the Eternal (Foundation).  He begets not, nor was He begotten; and there is none co-equal or comparable unto Him.” (Quran 112)

“He is the Originator of the heavens and the earth.  How can He have children when He has no wife?   He created all things and He is the All-Knower of everything.  Such is Allah, your Lord!  La ilaha illa Huwa (none has the right to be worshipped but He), the Creator of all things.  So worship Him (Alone), and He is the Trustee, Disposer of affairs, Guardian, over all things.  No vision can grasp Him, but His Grasp is over all vision.  He is the Most Subtle and Courteous, Well Acquainted with all things.” (Quran 6:101-103)

Muslims worship God alone without any intermediaries, He has no partners, associates, sons, daughters, or helpers.  Worship is directed solely to God, for He is the only One worthy of worship.  There is nothing greater than God.

The Christian belief that Jesus is the son of God or God himself is in direct opposition to tawheed.  The concept of a Trinity, Father, Son, and Holy Spirit is also firmly rejected by Islam.  The idea that Jesus atoned (or saved our souls) by dying is a concept completely at loggerheads with Islamic belief.

“O people of the Scripture!  Do not exceed the limits in your religion, nor say of God anything but the truth.  The Messiah Jesus, son of Mary, was a Messenger of God and His Word, which He bestowed on Mary and a spirit created by Him; so believe in God and His Messengers.  Say not, ‘Trinity!’  Cease; it is better for you!  For God is One God, far removed is He from every imperfection, Far Exalted is He above having a son.  To Him belongs all that is in the heavens and all that is in the earth.  And God is All Sufficient as a Disposer of affairs.” (Quran 4:171)

The idea of Jesus dying on the cross is central to the Christian belief.  It represents the conviction that Jesus died for the sins of humankind.  In other words a person’s sins have been ‘paid’ for by Jesus, and one is free to do as he pleases, for in the end he will attain salvation by belief in Jesus. This is absolutely rejected in Islam.

There is no need for God, or even a Prophet of God to sacrifice himself for humankind’s sins in order to buy forgiveness.  Islam refuses this view entirely.  The foundation of Islam rests on knowing with certainty that nothing should be worshipped but God alone.  Forgiveness emanates from the One True God; so, when a person seeks forgiveness, he must turn to God submissively with true remorse and ask for forgiveness, promising not to repeat the sin.  Then and only then will sins be forgiven by God Almighty.

Islam teaches that Jesus did not come to atone for the sins of humankind; rather, his purpose was to reaffirm the message of the Prophets before him.

The Islamic belief about Jesus’ crucifixion and death is clear.  He did not die to atone for humankind’s sins.  There was a plot to crucify Jesus but it did not succeed; he did not die but rather ascended into heaven.  In the last days leading up to the Day of Judgement, Jesus will return to this world and continue to spread the belief in the Oneness of God. The Quran tells us that on the Day of Judgement Jesus will deny ever asking the people to worship him instead of, or along with God.

“And (remember) when God will say (on the Day of Resurrection): ‘Jesus, son of Mary! Did you say unto men: Worship me and my mother as two gods besides God?’ He will say, ‘Glory be to You! It was not for me to say what I had no right (to say).  Had I said such a thing, You would surely have known it. You know what is in my inner‑self though I do not know what is in Yours; truly, You, only You, are the All‑Knower of all that is hidden (and unseen).  Never did I say to them aught except what You (God) did command me to say, Worship God, my Lord, and your Lord. And I was a witness over them while I dwelt amongst them, but when You took me up (to heaven), You were the Watcher over them; and You are a Witness to all things.” (Quran 5:116-117)

God tells us in Quran that there is only one unforgiveable sin, and that is if one dies having associated partners with God and did not repent from it before his death.

“Verily, God forgives not that partners should be set up with Him in worship, but He forgives except that (anything else) to whom He pleases, and whoever sets up partners with God in worship, he has indeed invented a tremendous sin.” (Quran 4:48)

In his traditions Prophet Muhammad, may the mercy and blessings of God be upon him, informed us that God said, “I am the Self-sufficient, I am in no need of having an associate. Thus he who does an action for someone else’s sake as well as Mine will have that action renounced by Me to him whom he associated with Me”.[1]

However, even the grave sin of associating partners with God can be forgiven if one truly turns to God, sincerely and with full repentance.

“And verily, I am indeed forgiving to him who repents, believes (in My Oneness, and associates none in worship with Me) and does righteous good deeds, and then remains constant in doing them (till his death).” (Quran 20:82)

“Say to those who have disbelieved, if they cease (from disbelief), their past will be forgiven.” (Quran 8:38)

Every human being can attain salvation by worshipping One God.  Staying connected to God and repenting from mistakes and sins is the road to salvation.  In the next article, we will talk about conditions of repentance.