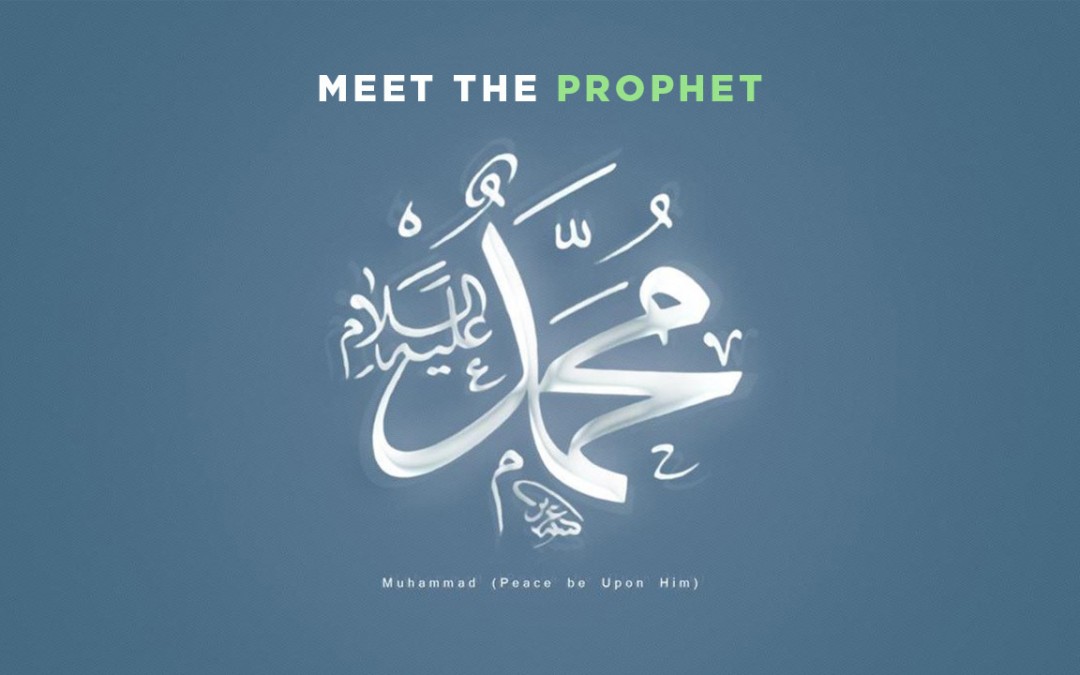 “I began to look at him and at the moon, he was wearing a red mantle, and he appeared to be more beautiful than the moon to me.” (Al-Tirmidhi)

This is how Jabir ibn Samura described the Last of the Prophets, the Chief of the Pious, the Prince of the Believers, the Chosen One of the Most Merciful – Muhammad, the Messenger of God.

He had a pleasant face that was round, white, and fair.  His hair fell to his ear lobes.  His beard was thick and black.  When he was pleased, his face would light up.  His laugh was no more than smiling.  His eyes were blackish, and his eyelashes were long.  His long eyebrows were curved.  When the eyes of Abdullah ibn Salam, the chief rabbi of Medina, fell on his face, he declared that such a noble face could not be the face of a liar!

He was of medium height, neither tall nor short.  He walked inclining forward.  He wore tanned leather sandals.  His pants would reach to the middle of his shin or sometimes just above his ankles.

On his back, towards the left shoulder was the ‘Seal of Prophethood’. It was the size of a pigeon’s egg with spots like moles on it.  His palms were described to be softer than the brocade of silk.

He was recognized by his fragrance when he approached from a distance.  Drops of his perspiration were described to be like pearls.  His companions collected his sweat to mix with their perfumes which made them even more fragrant!

Islamic doctrine holds if someone has been blessed with the vision of the Prophet in a dream as described, then indeed they have seen him.

He would keep silent for long periods of time and was the most dignified when silent.

When he spoke, he uttered nothing but the truth in a voice pleasing to the ears.  He did not speak rapidly as many people do today; rather he spoke in a clear speech so that those who sat with him could remember it.  His speech was described to be such that anyone who wished to count his words could have done so easily.  His companions described him to be neither vulgar nor indecent.  He neither cursed people, nor abused them.  He merely reprimanded by saying:

The most hateful conduct to him was lying.  Sometimes he used to repeat himself twice or even thrice to enable the listeners to understand him well.  He would give short sermons.  While delivering the sermons his eyes would become red, his voice would rise, and his emotions become visible as if he were warning of an imminent assault from an enemy.

He led a simple life without any extravagance or lavishness.  He put the worldly life behind his back and turned away from it.  He considered it to be a prison, not Paradise!  Had he wished, he could have had anything he desired, for the keys of its treasures were presented to him, but he refused to accept them.  He did not exchange his share of the life to come with the worldly life.  He knew that it is a corridor, not a permanent residence.  He understood fully well that it is a transit station, not a leisure park.  He took it for its real worth – a summer cloud that would soon disperse.

Yet God says He enriched him from poverty:

“A month would pass while the family of Muhammad would not light fire in their homes.  They subsisted on two things – dates and water.  Some residents of Medina who were his neighbors would send milk from their sheep, which he would drink and then give to his family.” (Saheeh Al-Bukhari, Saheeh Muslim)

She said the family of Muhammad never ate wheat bread to their satisfaction for three consecutive days from the time of his arrival at Medina until he passed away, about 10 years!

With all this, he would stand up in the middle of the night to offer his gratitude to his Lord in prayer.  He would pray for so long that his feet would swell!  When his wives would ask why he worshipped God so much, his only response would be:

“Shall I not be a thankful servant of God?” (Saheeh Al-Bukhari, Saheeh Muslim)

Omar, one of his companions, remembering the days he passed in hunger said that sometimes the Prophet did not even have rotten dates to satisfy his hunger!

Abdullah ibn Mas’ud, another companion and eye-witness, says that once, when Muhammad, may the mercy and blessings of God be upon him, awoke from sleep, the marks of the mat made out of date palm leaves on which he used to sleep were etched on his body.  Abdullah complained:

“My father and mother be ransomed for you!  Why did you not let us prepare something
(softer) for you from which you could protect yourself?”

“I have nothing to do with this world.  I am in this world like a rider who stops under the shade of the tree for a short time and, after taking rest, he resumes his journey again, leaving the tree behind.” (Al-Tirmidhi)

Various conquerors in the annals of history are known for spilling rivers of blood and erecting pyramids of skulls.  Muhammad, may the mercy and blessings of God be upon him, is known for his forgiveness.  He never took revenge from anyone who wronged him to the point that he never struck anybody with his hand, neither a woman nor a servant, unless he was fighting in battle. His forgiveness could be seen on the day he entered Mecca as a conqueror after eight years of exile.

He forgave those who persecuted him, and forced him and his family in exile for three years in rugged mountains, who had accused him of being a lunatic, a poet, or one possessed.  He pardoned Abu Sufyan, one of the most evil of people who plotted to persecute him day and night, along with his wife, Hind, who mutilated the dead body of the Prophet’s Muslim uncle and ate the raw liver after ordering Wahshi, a  fierce slave known for his fighting skills,  to kill him, which later led them to accept Islam. Who else could be on such an exalted standard of character but the noblest and most truthful Messenger of God?

Wahshi, who used to live in Mecca, won his freedom from Hind for the service of killing the uncle of the Prophet.  When Islam gained dominance in Mecca, Wahshi ran away from Mecca to Taif.  Eventually Taif also succumbed to the Muslims.  He was told Muhammad would forgive anyone who accepted Islam.  Even though the crime was so great, Wahshi gathered his courage and came to the Prophet of Mercy and announced his Islam, and Muhammad forgave him.

His forgiveness even extended to Habbar ibn Aswad.  When Zaynab, the Prophet’s daughter, was migrating from Mecca to Medina, the Meccans tried to stop her, Habbar was one of them.  He made the Prophet’s pregnant daughter fall from her camel.  As a result, she lost her baby.  Running away from the guilt of his crime, Habbar fled to Iran, but God turned his heart towards the Prophet.  So he came to the Prophet’s court, acknowledged his guilt, bore the testimony of faith, and was forgiven by the Prophet!

Muhammad performed physical miracles with God’s permission.  He split the moon into two halves by merely pointing his finger at it.  In a mystical journey known as Mi’raaj, he traveled in one night from Mecca to Jerusalem on a heavenly mount, al-Buraq, led all the Prophets in prayer, and then ascended beyond the seven heavens to meet his Lord.  He cured the sick and the blind; demons would leave the possessed by his command, water flowed from his fingers, and his food would glorify God.

Yet he was the most humble of men.  He sat on the ground, ate on the ground, and slept on the ground.  A companion narrated that if a stranger were to enter a gathering where he was present, he would not be able to differentiate the Prophet from his companions due to his humbleness.  Anas, his servant, swore that in his nine years of service, the noble Prophet never chastised him or blamed him for anything.  Those around him described Muhammad to be so humble that even a little girl could hold his hand and take him wherever she wished.  He used to come to the weak among the Muslims in order to visit the sick and attend their funeral processions.  He used to stay at the back of the caravan to aid the weak and pray for them.  He would not hesitate to walk with a widow or a poor person until he had accomplished for them what they needed.  He responded to the invitation of even slaves, eating nothing more than barley bread with them.

He was the best of men to his wives.  Aisha, his wife, described how humble he was:

“He used to remain busy serving and helping his household, and when the time for prayer came he would perform ablution and go for prayer.  He would patch his own sandals and sew his own garments.  He was an ordinary human being, searching his clothes for lice, milking his sheep, and doing his own chores.” (Saheeh Al-Bukhari)

Indeed he was the best of all people to his family.  His personality was such that people were not driven away from him!

Such was the noble Prophet of God who we must love more than our own selves and whom God has described as:

“Indeed in the Messenger of God you have a good example to follow…” (Quran 33:21)