‘And kill them wherever you find them…’ Quran 2:191 Explained – Ask A Muslim Skip to content 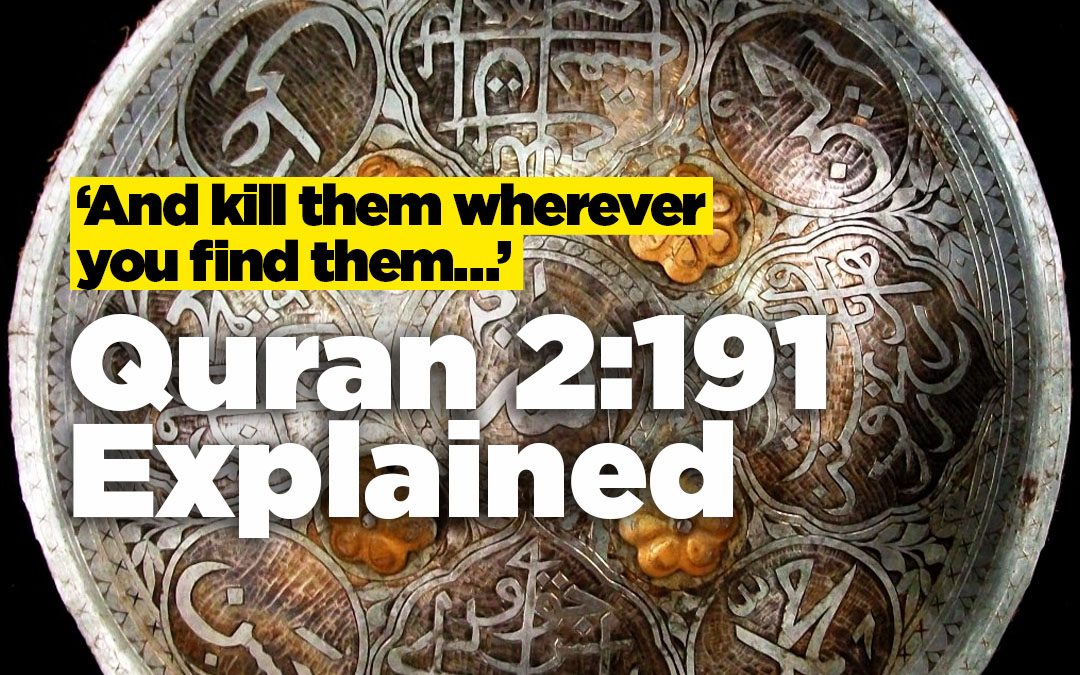 Critics as usual apply ‘cut and choose’ approach with regards to this passage (Quran 2:191). They only quote, “And kill them wherever you find them…(2:191). However, when we read the passage in its context (2:190-195) it says opposite what they portray of the verse.

2:190 Fight in the way of Godthose who fight you but do not transgress. Indeed. God does not like transgressors.
2:191 And kill them wherever you find them and expel them from wherever they have expelled you, and fitnah [Persecution] is worse than killing. And do not fight them at al-Masjid al- Haram until they fight you there. But if they fight you, then kill them. Such is the recompense of the disbelievers.
2:192 And if they cease, then indeed, God is Forgiving and Merciful.
2:193 Fight them until there is no [more] fitnah [Persecution] and [until] worship is for God. But if they cease, then there is to be no aggression except against the oppressors.
2:194 [Fighting in] the sacred month is for [aggression committed in] the sacred month, and for [all] violations is legal retribution. So whoever has assaulted you, then assault him in the same way that he has assaulted you. And fear God and know that God is with those who fear Him.
2:195 And spend in the way of God and do not throw [yourselves] with your [own] hands into destruction [by refraining]. And do good; indeed, God loves the doers of good.

It’s important whenever one reads a Quranic verse, to read it in its context. As you have read, critics only quote the part which suites them, they isolate previous verses and the ones after. When the passage is examined in context, it is clear that nowhere does it sanction the killing of innocent people. From verse 2:190 to 2:195, when read, Allah makes it evident to fight those only who fight them, fighting in self-defence.

Another thing some love to do with the verse is, change the Arabic word’s meaning. Example, the Arabic word ‘Fitna’ used in 2:191 and 2:193, they deceptively have translated the word as ‘disbelief’. So, when it’s read in that perspective, the passage is implying to fight to those who are disbelievers, just because of their religion. This again when we examine it, it will turn out to be a lie. The Arabic word ‘Fitnah’ means ‘persecution’, ‘corruption’, ‘sedition’. But when the word ‘Fitnah’ is used in verse 2:191 and 2:193 it means ‘persecution’.

2:191 And slay them wherever you come upon them, and expel them from where they expelled you; persecution is more grievous than slaying. But fight them not by the Holy Mosque until they should fight you there; then, if they fight you, slay them — such is the recompense of unbelievers.

“One of the most frequently mentioned portents of the end of time in Muslim prophecies is civil disorder, fitna. Yet contrary to what one might expect, in none of the many instances in which the term fitna (civil disorder) is mentioned in the Quran is it connected to end of time events. In the Qur’anic text, fitna refers to a sort of trial: “And know that your wealth and your children are a trial [fitna], and that with God is a mighty wage.” In other verses, the term connotes discord, controversy, and dissension: “As for those in whose hearts is swerving, they follow the ambiguous part, desiring dissension [fitna], and seeking to explain it; and none knows its meaning, save only God.” Fitna may also mean seduction: “Children of Adan! Let not satan tempt, [v. yaftatin], you as he brought your parents out of the Garden, stripping them of their garments to show them their shameful parts.” On other occasions, it describes chaos and civil disorder: “As for the unbelievers, they are friends one of another. Unless you do this, there will be strife [fitna] in the land and great corruption.” Finally it refers to plotting and acts of conspiracy: “Had they gone forth among you, they would only have increased you in trouble, and run to and fro in your midst, seeking to stir up sedition [fitna] between you; and some of you would listen to them; and God knows the evildoers.” A similar meaning is given in the following verses, where conspiracy against the community and its social and religious status quo is condemned: Persecution [fitna] is more grievous than slaying. But fight them not by the Holy Mosque until they should fight you there; then if they fight you, slay them- such is the recompose of unbelievers.” Even the ban on fighting during the holy months is lifted in cases of the greater danger of persecution: “Fighting in it is a heinous thing, but to bar from God’s way, and disbelief in him, and the Holy Mosque, and to expel its people from it- that is more heinous in God’s sight; and persecution [fitna] is more heinous than slaying.” [1]

“Concerning the verse “If two groups of believers fall to fighting” Q. 49.9) and “fight against them until there is no ‘fitnah’” (Q.2:193), he answered: “We done all this in the time of Prophet. At that time, we came minority so that a Moslem was be faced by fitnah in his religion, either he would be killed or would be the victim of oppression. When the Moslem community grows as powerful adherents, killing oppression has gone.” Based on this argument, we can conclude that ‘fitnah’ should be defined as any oppression or forcing Moslem to do or not to do something against his rights as human being; all this being ratio legis or cause to proclaim fight against oppressor or those who want to kill them.” [2]

“f-t-n to purify gold and silver by smelting them; to burn; to put to the test, to afflict (in particular as a means of testing someone’s endurance); to disrupt the peace of a community; to tempt, to seduce, to allure, to infatuate. Of this root, six forms occur 60 times in the Qur’an fatana 17 times futina six times; futun once; maftun once and fitnatun 34 times.
fitnatun [n.] 1 test (8:28) your possessions and your children are only a test 2 affliction, trial (22:11) but if a trial befalls him, he reverts to his old ways [lit. falls flat on his face, turns back to front] 3 persecution (2:191) and drive them out from where they drove you out, for persecution is more serious than killing 4 dissension, discord, civil unrest, infighting, mutiny (9:47) they would have scurried around in your midst, trying to sow discord among you 5 temptation, allurement (2:102) yet they [both] never taught anyone until they first said, ‘we are but a temptation-do not [fall for us and] reject the faith’ 6 treachery, defection, desertion (33:14) but if it [the city] had been entered from [all] its sides, with them in it, and they were asked to commit treachery, they would have committed it.” [3]

In conclusion, as we have examined the Arabic word ‘fitna’, and the context of passage, the verse does not promote the killing of innocent people. As shown, the passage shows that Muslims were allowed to fight those who were persecuting the Muslims, 1400 years ago. In other words, the passage sanctioned fighting in self-defence. [5] [6]

References:
[1] Messianic Beliefs and Imperial Politics in Medieval Islam: The ʻAbbāsid Caliphate in the Early Ninth Century [Copyright 2009] By Hayrettin Yücesoy page 37 – 38
[2] See Ibn Kathir, Tafsir Ibn Kathir (Beirut: Dar al-Fikr, 1986), volume, page 227 – 229.
[3] Arabic-English Dictionary of Qur’anic Usage: By Elsaid M. Badawi and Muhammad Abdel Haleem page 693
[4] Arabic-English Lexicon by Edward William Lane (London: Willams & Norgate 1863) Book 1, page 2335
[5] the classical scholar Al-Mawardi in his commentary on Quran 2:190 states:
“(but do not transgress), which means do not assault and transgress against those who are not fighting and do not kill women and children.” (Min Rawai’ al-Tafasir al-Nukat wa al-`Uyuun by al-Mawardi, volume 1, page 251)
[6] Muhammad al-Nasaafi:
“We should not transgress by initiating the fighting and not fight those who are not fighting from among the women, children, elders and so forth.” (Madarik al-tanzil wa-haqa’iq al-ta’wil, by Muhammed al-Nasaafi, volume 1, page 165).