Al-Qadr (The Night of Glory) 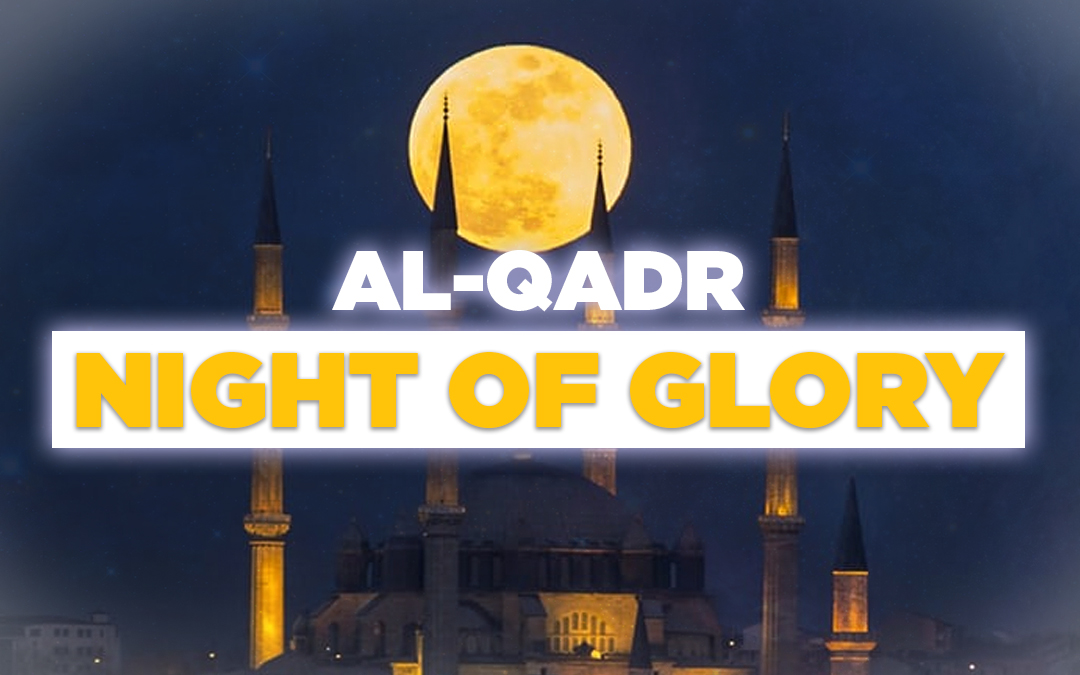 Verse 1 The beginning of the revelation of the Quran

This chapter speaks about the promised great night which the whole universe marks with joy and prayer.  It is the night of perfect communion between this world and the Supreme society.  That night marked the beginning of the revelation of the Quran to Muhammad, may the mercy and blessings of God be upon him, an event unparalleled in the history of mankind for its splendor and the significance it has for the life of mankind as a whole.  Its greatness is far beyond human perception.  The Quranic statements which relate this great event radiate with God’s clear and shining light.

Verses 2-5 The virtues of the Night of Decree

Its name, Laylat al-Qadr, or the Night of Power, may be taken to mean deliberate planning, management and organization, or it may mean value, position and rank.  Both meanings are relevant to the great, universal event of the revelation of the Quran and the assigning of the message to the Prophet.  It is indeed the greatest and most significant event the universe has ever witnessed.  It is the event which explains most clearly how human life benefits by God’s planning, management and organization.  This night is better than a thousand months.

This night is too sublime for proper human perception.  It is great because God chose it for the revelation of the Quran, so that its light may spread throughout the universe, and divine peace may spread in human life and conscience.  The Quran includes an ideology, a basis for values and standards, and a comprehensive code of moral and social behavior, all of which promote peace within the human soul and in the world at large.  It is great because of the descent of the angels, and Gabriel in particular, by God’s leave, carrying the Quran.  They fill all the space between heaven and earth in such a splendid, universal celebration, vividly portrayed in this chapter.

Humanity, out of ignorance and to its misfortune, may overlook the value and importance of the Night of Power.  When humanity does so ignore it, it loses the happiest and most beautiful sign of grace which God bestowed on it.  It also suffers the loss of the real happiness and peace gifted to it by Islam, namely, the peace of conscience, family and society.  What it has otherwise gained of material civilization is inadequate compensation for its loss.  The believers in Islam, are commanded not to forget or neglect this event.  The Prophet has taught us an easy and enjoyable way to commemorate it, so that our souls may always be in close communion with it.  He has urged us to spend this night of each year in devotion.  He said: “Seek the Night of Power in the last ten nights of Ramadan.” (Bukhari, Muslim) He also said: “Whoever spends the Night of Power in worship, with a pure motive of faith and devotion, will have all his past sins forgiven.” (Bukhari, Muslim)

Islam is not mere formalities.  Hence, the Prophet specifies that the consecration of that night must be motivated by faith and devotion.  This would make its consecration by any individual an indication of his or her full awareness of the far-reaching effects of what took place on that night.  The Islamic method of education and character building links worship with faith and establishes truth in our hearts and consciences.  By this method, worship is considered a means for maintaining full awareness of this truth, its clarification and firm establishment in our minds, hearts and souls.  This method has been proved to be the best for the revival of this truth so that it has an unfailing influence on our behavior.