Conflicting Accounts of Crucifixion in the Bible 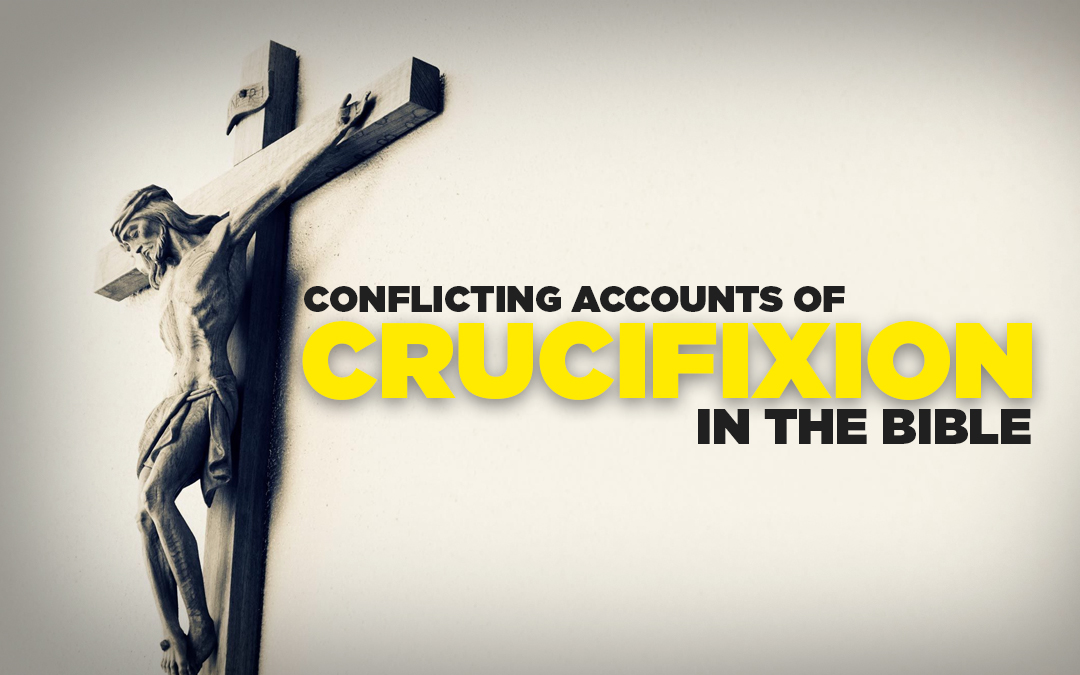 The following is a detailed discussion of sample contradictions contained in the biblical accounts of the crucifixion of Jesus:

In the Passion narratives, did Jesus carry his own cross or not?

Did Jesus Drink Wine or Vinegar?

Jesus was given something to drink while he was on the cross, but what?

Jesus and the Centurion:

Romans supposedly witnessed Jesus’ crucifixion, but what did they think?

The gospels describe several women as having followed Jesus around, but what did they do when Jesus was crucified?

What is the exact day Jesus was crucified?

Mark 14:12, Matthew 26:17, and Luke 22:7 – Jesus offered the Lord’s Supper “on the first day of unleavened bread, when they sacrificed the Passover lamb”. That would mean Jesus said the first Mass on Thursday, the fourteenth of Nisan. This was “the day of preparation” for the Passover when the lambs were slain and the meal prepared to be eaten in the evening according to Ex. 12:6.

John 19:31 – John tells us that Jesus was crucified on the “day of preparation”. That would seem to make Friday, the fourteenth of Nisan, the day of preparation. Saturday would then have been both the Sabbath and the Passover.

Computer software programs – Jesus was presumably crucified and entombed on a Wednesday afternoon, not on Friday. For more information, click on the following link: http://www.ucg.org/doctrinal-beliefs/jesus-wasnt-crucified-friday-or-resurrected-sunday/

Jesus’ last words before dying are important, but no one seems to have written them down.

Earthquake after the Resurrection:

Was there an earthquake when Jesus died?

Matthew 27:51-53 – At the moment Jesus died, a massive earth quake struck and opened tombs where dead people rose again
Mark, Luke, John – No earthquake is mentioned. No earthquake and no massive influx of formerly dead people were mentioned in any historical records, which is strange given how monumental such an event would be.

Was Jesus Crucified on a Tree or Cross?

Acts 5, Acts 10, and Acts 13 – Jesus was hanged on and taken down from a tree.
Matthew 27, Mark 15 – the chief priests, along with the scribes and elders, mocked Jesus and wondered if he could come down from the cross.
John 19 – Pilate wrote a title, and put it on the cross.

Was Jesus Seen Alive after Crucifixion?

Who saw Jesus after crucifixion?

Luke 24:1 – the women came to the tomb with medicine and found Jesus gone.
John 20:15 – Mary Magdalene thought Jesus was a gardener, after he healed and rose back up.
John 20:17 – Jesus was still in pain, he told Mary Magdalene “touch me not!”
John 20:19-29 – Jesus showed his original body to the disciples, and they checked it.