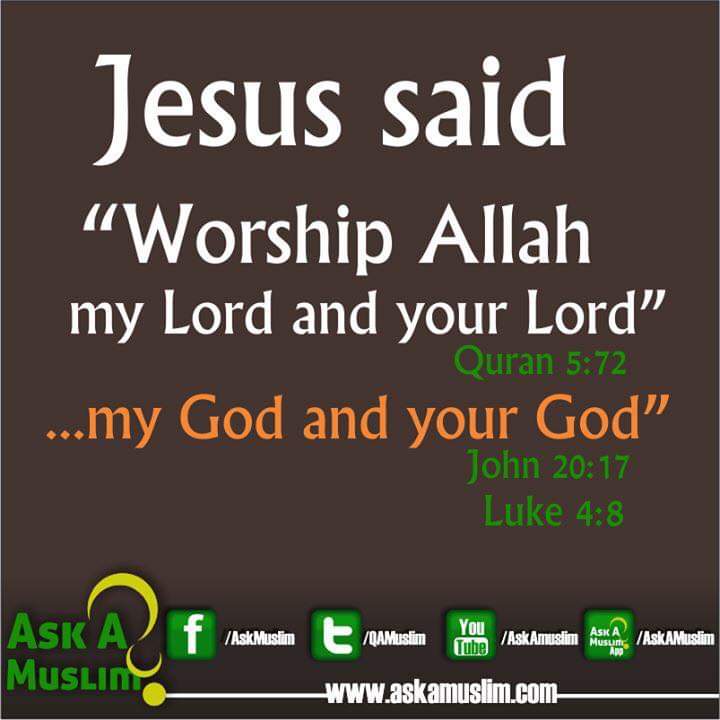 🎁🎁We will know look at Jesus from Islamic perspective 🎁🎁

⚡️First of all Jesus is called ‘Eesa in Arabic language, We believe that ‘Eesa (peace be upon him) was one of the slaves of Allaah, and one of His noble Messengers. Allaah sent him to the Children of Israel to call them to believe in Allaah alone and worship Him alone.

👉🏼Allaah says (interpretation of the meaning):

“And (remember) when ‘Eesa (Jesus), son of Maryam (Mary), said: ‘O Children of Israel! I am the Messenger of Allaah unto you..’

🌻Muslim’s beliefs concerning Jesus peace be upon him:🌻

1. ‘Eesa was not a god or the son of God as the Christians claim.

2. We believe that ‘Eesa was born from the Virgin Maryam with no father, and that is not impossible for Allaah Who, when He wills a thing, says “Be!” and it is. And what clearly proves this is the creation of Adam, Allah created him without a father or a mother..

3. We believe that Allaah supported him with miracles to prove he was speaking the truth.

Allah says (interpretation of the meaning):
“(Remember) when Allaah will say (on the Day of Resurrection). ‘O ‘Eesa, son of Maryam (Mary)! Remember My Favour to you and to your mother when I supported you with RoohulQudus [Gabriel] so that you spoke to the people in the cradle and in maturity; and when I taught you writing, the power of understanding, the Tawraat (Torah) and the Injeel (Gospel); and when you made out of the clay, a figure like that of a bird, by My Permission, and you breathed into it, and it became a bird by My Permission, and you healed those born blind, and the lepers by My Permission, and when you brought forth the dead by My Permission; and when I restrained the Children of Israel from you (when they resolved to kill you) as you came unto them with clear proofs, and the disbelievers among them said: This is nothing but evident magic’”
[al-Maa’idah 5:110]

4. We believe that he told his followers of the coming of our Prophet Muhammad (peace and blessings of Allaah be upon him).

Allaah says (interpretation of the meaning):
“And (remember) when ‘Eesa (Jesus), son of Maryam (Mary), said: ‘O Children of Israel! I am the Messenger of Allaah unto you, confirming the Tawraat [(Torah) which came] before me, and giving glad tidings of a Messenger to come after me, whose name shall be Ahmad.’ But when he (Ahmad, i.e. Muhammad) came to them with clear proofs, they said: ‘This is plain magic’”

5. We believe that he did not die❌❌ and his enemies the Jews did not kill him, rather Allaah saved him from them and raised him up to heaven alive✅. Meaning, He was neither killed, nor crucified
instead, he was raised up by Allah to heaven. In fact, Allah gave someone else Jesus’ appearance, causing everyone to believe that Jesus was crucified.
👇🏼 👇🏼 👇🏼

The Qur’an says about this, “And [for] their saying, “Indeed, we have killed the Messiah, Jesus, the son of Mary, the messenger of Allah.” And they did not kill him, nor did they crucify him; but [another] was made to resemble him to them. And indeed, those who differ over it are in doubt about it. They have no knowledge of it except the following of assumption. And they did not kill him, for certain.158. Rather, Allah raised him to Himself. And ever is Allah Exalted in Might and Wise. And there is none from the People of the Scripture but that he will surely believe in him [i.e., Jesus] before his death. And on the Day of Resurrection he will be against them a witness.” (Quran , 4:157-59)
💐💐💐💐💐💐💐

6. We believe that he will come back down at the end of time ✅and will disprove the claim of his enemies the Jews that they killed him, and will disprove the claim of the Christians that he is God or the son of God, and he will not accept anything from them but Islam♥️. So He will eventually return to earth 🌍 towards the end of the world, rule by Muhammad’s law 👌🏼 then he will die and be buried, and will eventually be resurrected, like all human beings

👉🏼As the Qur’an states, “From it [i.e., the earth] We created you, and into it We will return you, and from it We will extract you another time.” (Quran , 20:55)
The Messenger of Allaah (peace and blessings of Allaah be upon him) said: “By the One in Whose hand is my soul, soon the son of Maryam will descend among you [according to another report: the Hour will not begin until the son of Maryam descends among you] as a just judge. He will break the cross, kill the pigs and abolish the jizyah, and money will become abundant until no one will accept it.”
💐💐💐💐💐💐💐