Haajar, the Migrant – Symbol of Dignity – Ask A Muslim Skip to content 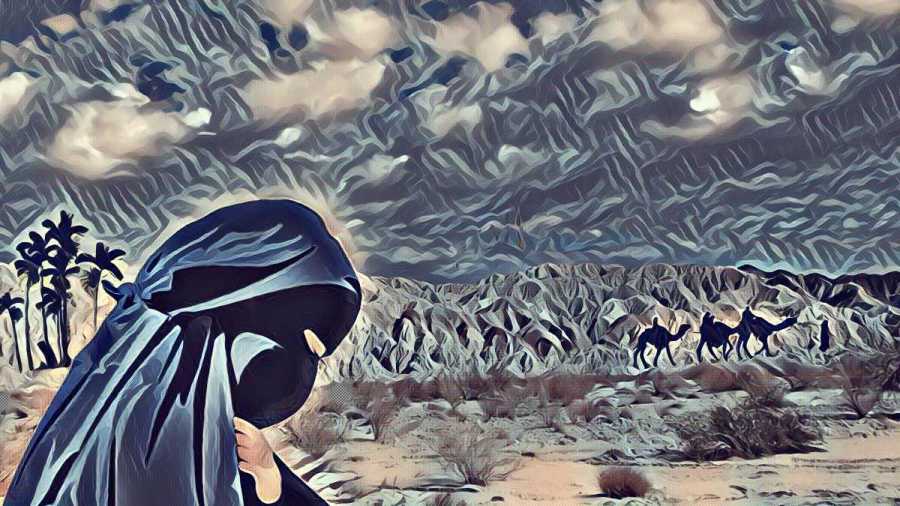 Hajj is a symbolic demonstration of Muslims unity and harmony; of equality and humility. It is a perpetuation of the legacy of the house of Abraham (peace be upon them). Prophet Abraham was the first to announce the pilgrimage to hijjul-bayt/ journey to the House; a “house” whose grandeur lies in the basic, simple undecorated Ka’bah or “cube”. The six sides of the cube encompass every direction and simultaneously their sum symbolizes all directions while the Ka’bah itself is facing no direction in particular; and yet all faithful take it for qiblah/direction of worship [Quran 2:115].

Stature of the Household of Haajar

Toward the west of Kaaba there is a semi-circular short wall which is arching towards the Kaaba is the Hijr Ismail/ the lap of Isma’il; the area in which Prophet Isma’il was raised, his kindergarten. Haajar’s grave is in the environs of the Kaaba. Allah, the Almighty, in His great and glorious Divinity and Self-sufficiency, chose one among humankind, as the special among all of them.  From among all humanity He has chosen: a woman, from among all women: a slave, and from among all slaves: a black maid! The seemingly weakest and most discriminated of His creatures was given a place of dignity next to His own house. An affront to all chauvinists, bigots and racists.

Some of the essential rituals of Hajj are a memory of the Nubian Hagar. When we run the sa’i between the hills of Safaa and Marwah, realize that we are re-enacting the running of Haajar. Her selfless search for the liquid of life was to nourish her baby, who was the forefather of Prophet Muhammad (pbut); an act so valued by Allah that He considered it worthy enough to be incorporated as an integral component of the hajj. Prophet Isma’il was nourished from the waters of zamzam and we still drink from that water today.

Islamic tradition has ascribed two possible reasons for why she was named Haajar. One is that she was a female migrant /muhajirah; the other is that she was inclined hajara / to distance herself from evil. The Prophet intimated that the ideal immigrant is the one who behaves like Haaajar. Hajara Haajar / “Hijrah is what Haajar did.”

Over the past three years, hundreds of thousands of refugees from the Middle East entered the European Union in the biggest refugee crisis since World War II; people; mostly Muslim; searching for a sanctuary from war-torn towns and broken lives. They are victims, not criminals. They have survived barrel bombs and landmines. They have survived the brutality of their corrupt governments and the mercilessness of the mercenaries who kill in the name of Islam. They have seen their homes turned into dust and their cities reduced to rubble. They have buried fathers/mothers, brothers/sisters, and sons/daughters, grandparents and grandchildren.

As for these refugees; their pain is indeed our shame. The refugee issue must be dealt with in a long-term, cooperative, globally responsible way. The worst disease of this day and age is that of people being uncared for and feeling unloved. There is so much hurt in this world despite so much capacity to show love. In a world where there is so much pain, so much hurt, so much loneliness; what we need is the quality of compassion.

As millions of Muslims gather in and around the sacred city of Makkah; coming from every corner of the globe responding to Abraham’s call, to perform the sacred rites of Hajj; many members of our own community will be there; all pilgrims, pulled away from all that is familiar, move from city to city, experiencing dislocation like exiles. From Makkah to Mina to ‘Arafah to Muzdalifah to Mina. All these forms of hijrah …migration of Haajar to Makkah, early Muslims to Abyssinia, the Prophet to Madinah; all symbolize the movement of Muslims from lands of oppression to places of safety and peace. So, do we not reflect that the whole Hajj reminds us of the plight of refugees; the pilgrims go in the most basic form of clothing from place to place… Makkah to Mina, Mina to ‘Arafah, ‘Arafah to Muzdalifah, Muzdalifah to Mina, no belongings living in tents. How could we reflect on the Hajj and forget the refugees? How could we ignore the refugees especially in these time of crises?

Haajar who is central to the Ka’bah and whose sa’i is part of the Hajj, reminds us, by her very name, never to forget the plight of those who leave their home to find security somewhere safe.