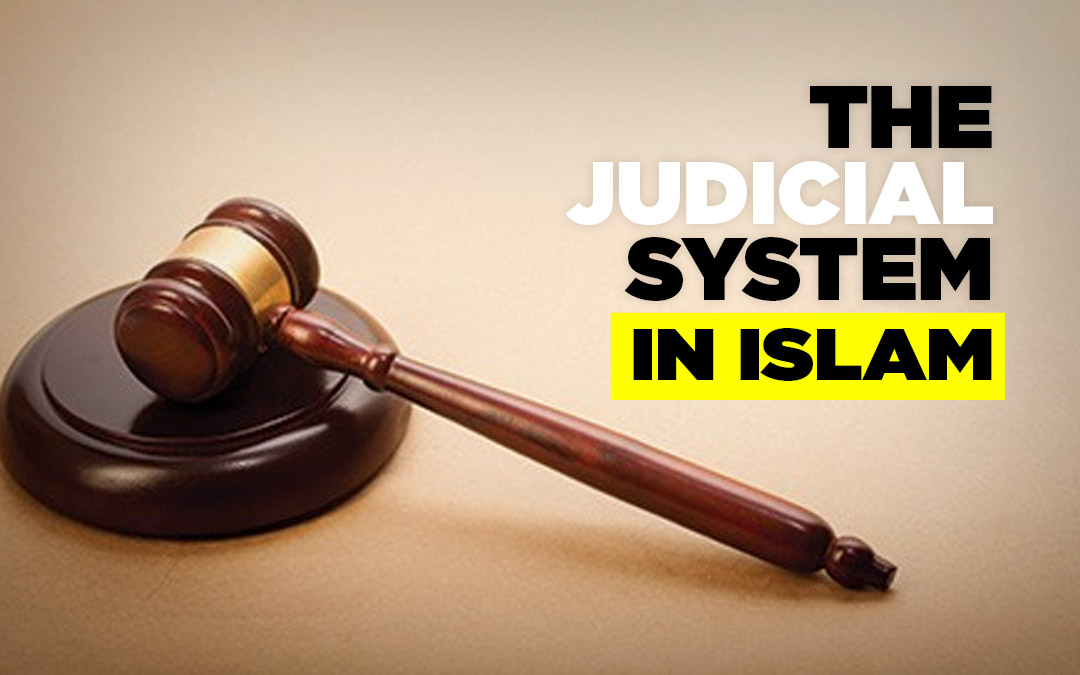 Man is a social being by nature.  He cannot live perpetually on his own, completely independent of others.  People are interdependent.  Consequently, friction arise between them when their personal interests come into conflict with each other, or when what they perceive as their individual rights infringe upon those of others.  Conflicts between them inevitably break out.  In some cases, one party to the conflict might be strong and aggressive while the other is weak and condescending, incapable of defending his rights.

Because of this, it becomes necessary for there to be a way to prevent people from oppressing one another, to ensure that the weaker members of society receive justice, and to determine right from wrong when issues get complicated or uncertain.  This can only be realized through a judge that has the power to give legal verdicts in cases of dispute.

For this reason, we find that the existence of a judge is considered by Islamic law and the laws of all the other revealed religions to be both a religious obligation and a necessity of human life.  God says:

“We have sent Messengers with clear proofs, and sent down with them the Scripture and the Balance that mankind can establish justice…” (Quran 57:25)

God’s Messenger was the greatest of judges.  He used to act in the capacity of judge in the city of Medina, which was the first Islamic state.  He used to appoint people to be judges in other cities.  Among these were `Utâb b. Asyad who was sent to Mecca, Ali b. Abu Talib and Muadh b. Jabal, both of whom were sent to Yemen.

In the era of the Rightly Guided Caliphs, the head of state continued to be the one to appoint judges, govern their affairs, protect their independence, and keep the governors and political appointees – and even the Caliphs – subject to the judges’ verdicts.  Umar b. al-Khattaab, the second Caliph, was the first person to make the judge an independent entity, distinct from the Caliph and the governors.

In this way, the judicial system continued to evolve throughout the early Islamic era, during the Umayyad era, and well into the Abbasid era.  The office of Chief Justice came into being at this time.  The Chief Justice became responsible for appointing and removing judges.  He was responsible for supervising their behavior and monitoring their performance.  The first person to be appointed to this post was the justice Abu Yusuf, the student of the great jurist Abu Haneefah (may God have mercy on them both).  Thereafter, this office became widespread throughout the Muslim lands.  It continued to exist up to the fall of the Ottoman Empire.

The names of many just judges have been preserved in Islamic History.  Their names have become like synonyms for justice and integrity.  Many pages in the history books are devoted to the lives and careers of eminent judges like Iyâs b. Muawiyah, Shurayh b. Abdallah, al-`Izz b. `Abd al-Salam and others who applied the teachings of Islam in the best possible manner.  They give us a living example of how a Muslim judge is supposed to conduct himself.

We should mention, since we are discussing the Islamic judicial system, that Islam sets down broad guidelines and basic principles concerning the affairs of life and rarely concerns itself with the particular details of life.  This is so these guidelines can stay relevant for every time and place.  One of these guidelines is that establishing justice among people is an obligation that has to be carried out.  As for the manner of achieving this objective, this has not been detailed by the sacred texts.  This has been left for the people of each generation to deal with in a way most suited to their unique set of circumstances.  The only condition is that whatever methods are chosen must not run contrary to Islamic Law.

DEFINING THE JUDICIAL SYSTEM AND ITS LEGAL BASIS

The judicial system in Islam is a system for deciding between people in litigation with the aim of settling their disputes in accordance with the injunctions of the Divine Law, injunctions that are taken from the Quran and Sunnah.

All of the Messengers of God (peace be upon them) acted as judges.  God says:

“And remember David and Solomon, when they gave judgment concerning the field when people’s sheep had browsed therein at night, and We were witness to their judgment.  And We made Solomon to understand the case.  And to each of them We gave good judgment and knowledge.” (Quran 21:78-79)

“O David, verily we have placed you as a successor on Earth, so judge between people in truth, and do not follow your desires for it will mislead you from the path of God.  Verily, those who stray from the path of God have a severe punishment because they forgot the day of reckoning.” (Quran 38:26)

Prophet Muhammad, who came with the final and eternal Message, was ordered by God to pass judgment in disputes just as he was ordered to spread the word of God and call people to Islam.  This is mentioned in the Quran in a number of places.  God says, for instance:

“So judge (O Muhammad) between them by what God has revealed and do not follow their vain desires, but beware of them lest they turn you away from some of what God has sent down to you.” (Quran 5:49)

“…And if you judge (O Muhammad), judge between them with justice.  Verily, God loves those who act justly.” (Quran 5:42)

“But no, by your Lord, they shall have no faith until they make you (O Muhammad) judge in all their disputes and find in themselves no resistance against your decisions and accept them with full submission.” (Quran 4:65)

The Sunnah also provides for the legal basis of the Islamic judicial system.  It is related by Amr b. al-Aas that the Prophet said:

“You should not wish to be like other people, except in two cases: a man who God has given wealth and he spends it on Truth and another who God has granted wisdom and he gives verdicts on its basis and teaches others.” (Saheeh Al-Bukhari, Saheeh Muslim)

Many scholars have related to us that there is consensus among Muslims on the legal status of the judicial system in Islam.  Ibn Qudamah says:

“The Muslims are unanimously agreed that a judicial system must be established for the people.”

The Islamic Ruling Concerning the Judiciary

The jurists agree that the duties of the judge are an obligation that must be carried out by society.  If some members of society carry out this duty, it is sufficient for everyone.  If, on the other hand, everyone neglects it, then everyone in society is sinful.

The proof that these duties are obligatory comes from the Quran:

It is only necessary for a small number of individuals to perform judicial duties since judicial concerns come under the broad duty of enjoining what is right and forbidding what is wrong.  It is not obligatory for every individual to carry out this duty as long as some people are doing so.

The affairs of the people will not be correct and upright without a judicial system.  It is, consequently, obligatory for one to exist, just like it is necessary to have a military.  Imam Ahmad, one of the greatest and most well-known scholars of Islam said:

“People have to have a judicial authority or their rights will disappear.”

The duties of the judiciary include enjoining what is right, helping the oppressed, securing people’s rights, and keeping oppressive behavior in check.  None of these duties can be performed without the appointment of a judiciary.

A judicial system is a necessity for the prosperity and development of nations.  It is needed to secure human happiness, protect the rights of the oppressed, and restrain the oppressor.  It is the way to resolve disputes and ensure human rights.  It facilitates enjoining what is right, forbidding what is wrong, and curbing immoral behavior.  In this way, a just social order can be enjoyed by all sectors of society, and every individual can feel secure in his life, property, honor, and liberty.  In this environment, nations can progress, civilization can be achieved, and people are free to pursue what will better them both spiritually and materially.