Who wrote the Qur’aan and how was it put together? (Compilation of the Quran) 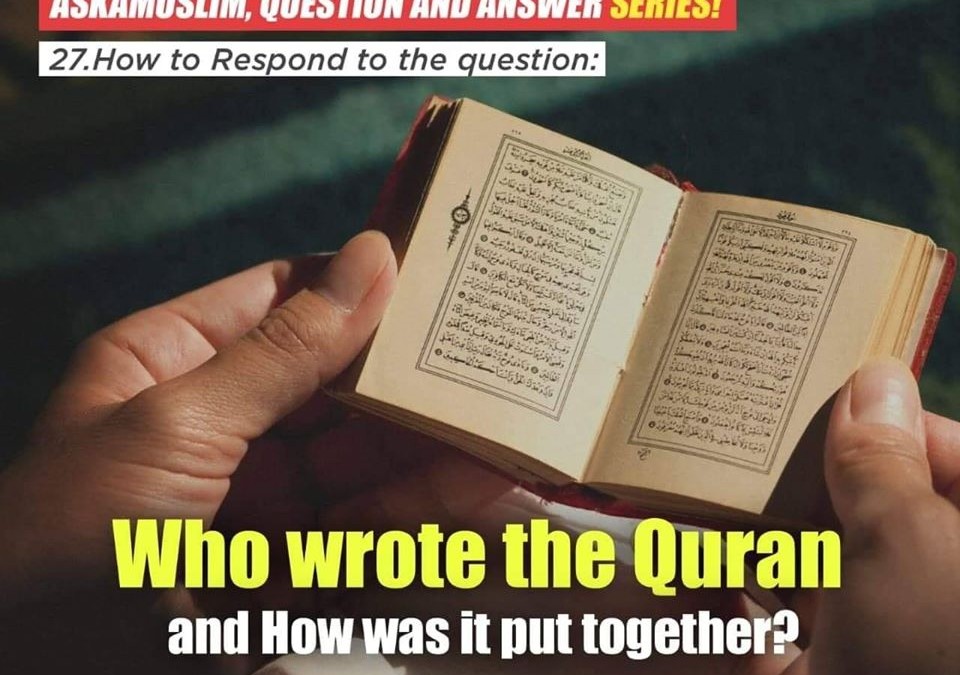 Countless Muslims have memorized the Quran. In the month of Ramadan, the entire Quran is recited in the Tarawih prayer at the Kaaba. Even the slightest mistake can stand out to Muslims who know it well from all around the world.

On the 25th year of the hijra (647), Uthman gathered a delegation attended by Abdullah ibn al-Zubair, Saeed ibn al-Aas and Abd al-Rahman ibn Harith under the leadership of Zaid ibn Thabit. All of them, except for Zaid, were from Quraysh. Uthman said that the dialect of Quraysh should be preferred if they were to fall into conflict with Zaid regarding the dialect, since Muhammad was from the Quraysh tribe.

👉🏼The Quran had been revealed in seven dialects of the Arabic language of the time.

The first Muslims who were literate could easily read the writing of their own language, but somewhat differently, since at the time the Arabic script did not have 🌱diacritical marks to differentiate🌱 letters or 🌱vowel symbols.

👉🏼👉🏼👉🏼For example, those from the Tameem tribe pronounced the letter “sin” as “te” and read the word “nas” as “nat.” It was diverse and convenient, and did not change the meaning. Thus even (Allah Exalted be He) sent down the Quran in 7 letters i.e seven dialects of the Arabs

The delegation brought the original mus-haf from Hafsah ( ra). In this mushaf, the surahs were not separated from each other.

👉🏼The order of the surahs was not based on the order the archangel Gabriel gave them to Prophet Muhammad, but on the consensus of the companions.

—–>The old copies were destroyed to prevent future conflicts. Because of this, there are some that accuse Uthman of changing the Quran.

The copy that stayed with the caliph was called al-Mushaf al-Imam (the head mushaf). There is no difference between the mushafs recited around the world today since they were all copied from original copies.

In Topkapı Palace and the Museum of Turkish-Islamic Arts in Istanbul, there are mushafs from Uthman and Ali’s period. One of them was handwritten by Uthman, and the other two by Ali (ra)

Allah dectated it to angel Gabriel

It was then written in

Angels copied it to a book

So prophet Muhammad took it from the mouth of Archangel Gabriel

All the Quran was copied then in one book

FORMAL COMPILATION AS A “BOOK”.

The compilation of the Holy Qur’an took place in three stages:

2- During the caliphate of Sayyidina Abu Bakr (rad)

3- During the caliphate of Sayyidina Othman bin Affan

The entire Quran was recorded in writing at the time of revelation from the Prophet’s dictation, may the mercy and blessings of God be upon him, by some of his literate companions, the most prominent of them being Zaid ibn Thabit.

The verses were recorded on leather, parchment, scapulae (shoulder bones of animals) and the stalks of date palms.

The codification of the Quran (i.e. into a ‘book form’) was done soon after the Battle of Yamamah after the Prophet’s death, during the Caliphate of Abu Bakr.

Many companions became martyrs at that battle, and it was feared that unless a written copy of the entire revelation was produced, large parts of the Quran might be lost with the death of those who had memorized it. Therefore, at the suggestion of Umar (ra)to collect the Quran in the form of writing, Zaid ibn Thabit was requested by Abu Bakr to head a committee which would gather together the scattered recordings of the Quran and prepare a mushaf – loose sheets which had the entire revelation on them.

To safeguard the compilation from errors, the committee accepted only material which had been written down in the presence of the Prophet himself, and which could be verified by at least two reliable witnesses who had actually heard the Prophet recite the passage in question.

Once completed and unanimously approved by the Prophet’s Companions, these sheets were kept with the Caliph Abu Bakr then passed on to the Caliph Umar and then Umar’s daughter and the Prophet’s widow, Hafsah the daughter of Umar Ibn Al Khattab ra :(may Allah be pleased with him)

▪︎▪︎▪︎
By the time of the third Caliph, `Uthman ibn `Affan, the Muslim population had spread over

vast areas out side the core Arab regions and many people of other cultures were entering Islam.

About 15 years after the first compilation, therefore, it was suggested that authenticated copies of the Qur’an be made available to major population centers in those areas.

Zayd again was instructed to undertake the task. He again formed a committee. Instead of just making copies of the existing text, they decided to seek corroboration of each Ayah in the earlier compilation with at least two other written records in the private copies in the possession of known reputable individuals. It is reported that this comparison was successful for all Ayahs except one. For this Ayah, only one comparison could be found.

But it was in the hands of a person who was

Prophet in a case requiring two witnesses. it is reported that, 7 copies of the collection were prepared and authenticated.

One of these copies was given to the Caliph himself. One became the reference copy for the people of Madinah, one was sent to Makkah, one to Kufah, and one to Damascus.

We should mention that the committee, while doing its work, confirmed the general observation that 👉🏼all private copies were incomplete,
👉🏼some were out of sequence,
👉🏼 some were in tribal dialects other than the standard Quraish dialect, and
👉🏼many had marginal notes inserted by the owners.

They expressed concern that as time passes the context of these deficiencies will be lost.

These partial copies may get into public circulation after the death of the owners of these records and become a source of schisms and create confusion. 👈🏼

They, therefore, recommended that

🌴🌱🌼👉🏼all such copies that resemble mere manuscripts must be destroyed.

The Caliph issued orders to that effect but did not put in place any mechanisms for enforcing the orders.

👉🏼There is sufficient evidence that some people kept their copies and 👉🏼some were used by mischief makers to create controversies that did not succeed.

Those Authentic copies of the Qur’an are known as the “`Uthmani” text. This text, however, did not have the short vowels that are even today left out of Arabic text used by those who know the language. In the absence of these short vowels, however, those not well versed in the language can make serious mistakes.

These vowels were, therefore, inserted about 60 years later under instructions of the governor of Kufa, named Hajjaj Ibn Yusuf.

A Foot Note Regarding Required Qualifications for interpreting the Qur’an, being considered the literal word of God, is taken very seriously by Muslims.

It is not enough to just study the Arabic language to interpret the Qur’an. Muslims have agreed over the centuries that one must be well-versed in the following before one is considered qualified to offer a credible opinion.

• Mastery of classical Arabic. (Arabic of the Quraish of the time of the Prophet).

• Mastery of the entire book. (“The Qur’an explains the Qur’an”).

• A thorough knowledge of Hadith literature. (The Prophet’s interpretation is binding and those around him understood it better than the later generations).

PRESERVATION OF THE QURAN

♦️Not only were the words of the Quran memorized, but also their pronunciation, later which formed into a science in itself called Tajweed.

This science meticulously elucidates how each letter is to be pronounced, as well as the word as a whole, both in context of other letters and words.

Today, we can find people of all different languages able to recite the Quran as if they are Arabs themselves, living during the time of the Prophet.

♦️👉🏼Furthermore, the sequence or order of the Quran was arranged by the Prophet himself and was also well-known to the Companions. Each Ramadan, the Prophet would repeat after the angel Gabriel (reciting) the entire Quran in its exact order as far as it had been revealed, while in the presence of a number of his Companions. In the year of his death, he recited it twice] Thereby, the order of verses in each Surat (Chapter) and the order of the Chapters became reinforced in the memories of each of the Companions present.

Once copies were made, the original was returned to Hafsah (rad). The new copies were then distributed to every Muslim province with the orders that all other copies of the Qur’an, be they full or partial copies, were to be burnt and replaced by this original one. Since that day the Noble Qu’ran has remained in its original pristine form and will remain as such in the future by the Grace and Blessings of Allah Almighty.

👇🏻👇🏻👇🏻
To this day, all existing copies of the Noble Book are identical to the version compiled by Uthman bin Affan (ra) and it is perfect, for Allah Subhanahu wa taala willed it to be perfect.