9 Astonishing Facts in the Quran that will Amaze You 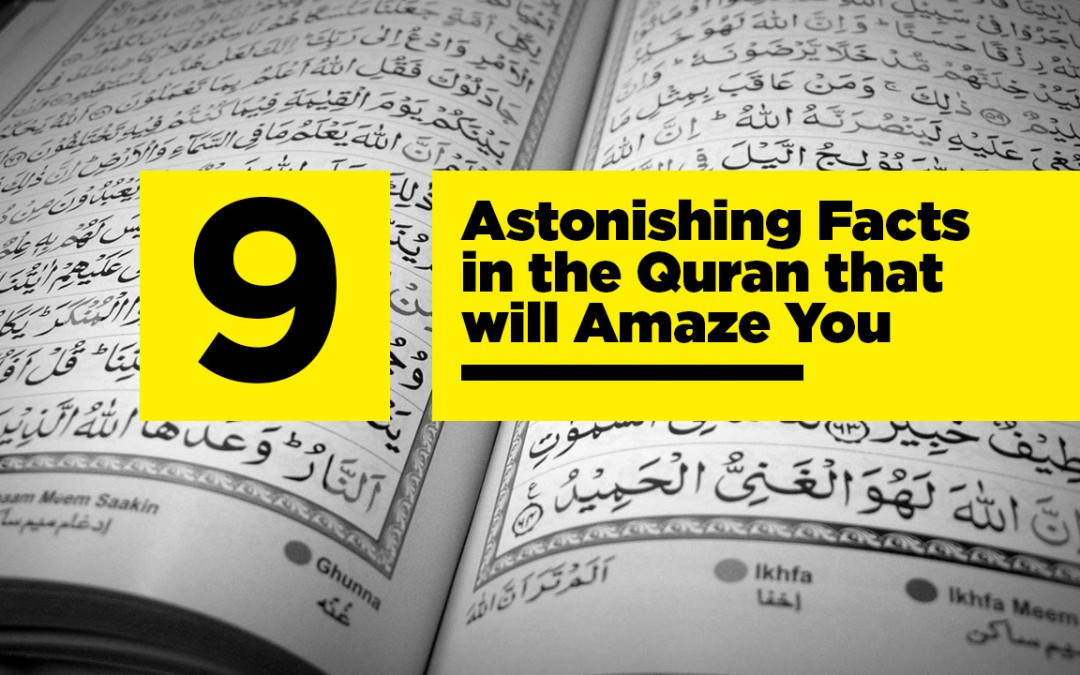 There are many clear signs that the religious book of Islam, the Quran, is the word of God and we have many reasons to support and validate this claim:

The following are some facts found in the Quran:

Water is essential for all living things. We all know that water is a basic need for life but the Quran makes a very unusual claim:

“We made every living thing from water. Will they not believe?” (Quran 21:30)

In this verse(Ayah) water is pointed out as the origin of all life.  All living things are made up of cells.  We now know that cells are mostly made up of water [1].  For example, 80% of the cytoplasm (basic cell material) of a standard animal cell is described as water in biology textbooks.

The fact that living things consist mostly of water was discovered only after the invention of the microscope.  In the deserts of Arabia, the last thing someone would have guessed is that all life came from water.

Iron is unnatural to the earth.  It did not form on the earth but came down to earth from outer space.  This may sound weird but it’s true.  Scientists have found that billions of years ago the earth was stuck by meteorites.  These meteorites were carrying Iron from distant stars which had exploded.

The Quran says the following on the origin of Iron:

“We sent down Iron with its great inherent strength and its many benefits for humankind.” (Quran 57:25)

Allah uses the words ‘sent down’ for Iron.  It is evident from the verse(Ayah) that Iron is not an earthly material, but was sent down for the benefit of humankind.  The fact that Iron came down to earth from outer space is something which could not be known by the primitive science of the 7th century.

The sky plays a crucial role in protecting the earth.  The sky protects the earth from the lethal rays of the sun.

If the sky did not exist, then the sun’s radiation would have killed off all life on earth.  It also acts like a blanket wrapped around the earth, to protect it from the freezing cold of space.

The temperature just above the sky is approximately -270oC.  If this temperature was to reach earth, then the planet would freeze over instantly.

The sky also protects life on earth by warming the surface through heat retention (greenhouse effect), and reducing temperature extremes between day and night [3].

These are some of the many protective functions of the sky.

The Quran asks us to consider and ponder up on the sky in the following verse (Ayah):

“We made the sky a protective ceiling.  And yet they are turning away from Our signs!” (Quran 21:32)

The Quran points to the sky’s protection as a sign of Allah.

The protective properties of the sky were discovered by scientific research conducted in the 20th century.

The Quran grabs our attention to a very important characteristic of mountains:

A book titled ‘Earth’ by Geophysicist Frank Press explains that mountains are like stakes, and are buried deep under the surface of the earth. Mount Everest, the height of which is approximately 9 km above ground, has a root deeper than 125 km.

The fact that mountains have deep ‘stake’ like roots was not known, until after the development of the theory of plate tectonics in the beginning of the 20th century.

At a time when the science of Astronomy was still primitive, the expansion of the universe was described in Quran:

“And it is We who have built the Universe with [Our creative] power and keep expanding it.” (Quran 51:47)

The Quran mentioned the expansion of the universe even before the invention of the telescope!

In 1512 AD the astronomer Nicholas Copernicus put forward his theory that the Sun is motionless at the center of the solar system, and that the planets revolve around it.

The belief that the Sun is stationary was widespread amongst astronomers until the 20th century.  It is now a well-established scientific fact that the Sun is not stationary, but is moving in an orbit around the center of our Milky Way galaxy.

The Quran mentions the orbit of the Sun:

The Quran would have been wrong according to astronomers just a couple of decades ago.  But we now know that the Quranic account of the Sun’s motion is consistent with modern Astronomy.