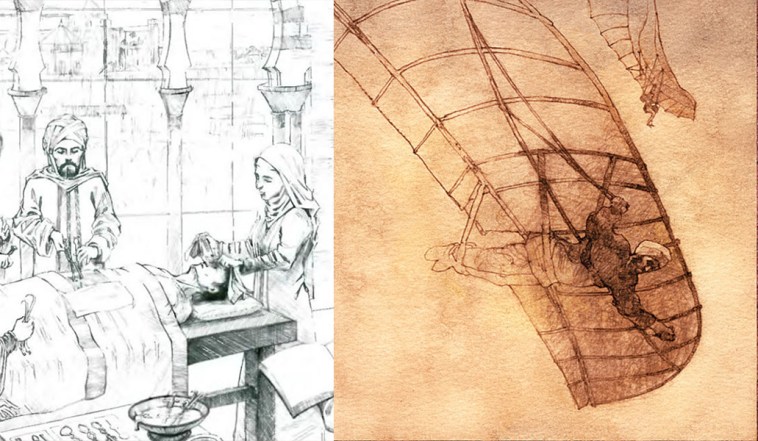 Along with the first university, and even the toothbrush, there are many surprising Muslim inventions that have shaped the world in which we live today. The origins of these fundamental ideas and objects are the focus of “1001 Inventions”, a book celebrating the forgotten history of 1,000 years of Muslim heritage. From this book, I have summed up ten outstanding Muslim inventions which we still use today.

More than twelve hundred years ago, hard-working people have fought to stay awake without this stimulant, until a herd of curious goats and their watchful master, an Arab named Khalid, discovered this simple, yet life-changing substance. As his goats grazed on the Ethiopian slopes, he noticed they had become lively and excited after eating a particular berry. Instead of just eating the berries they were taken and boiled to create “al-qahwa”.

An ingenious man called al-Jazari from Diyarbakir in South-East Turkey was a pious Muslim and a highly skilled engineer who gave birth to the concept of automatic machines. By 1206, al-Jazari had made numerous clocks of all shapes and sizes. Just as we need time today to structure our lives, so did Muslims over seven hundred years ago. Al-Jazari was sticking to the long Muslim tradition of clock-making. They knew it was important to know the time so it could be used well through doing good deeds: knowing when to pray at the right time each day and announce the call to prayer in mosques.

Ibn al-Haitham revolutionized optics, taking the subject from one being discussed philosophically to an actual science based on experiments. He rejected the Greek idea that an invisible light emitting from the eye caused sight, and instead rightly stated that vision was caused by light reflecting off an object and entering the eye.

By using a dark room with a pinhole on one side and a white sheet on the other, he provided the evidence for his theory. Light came through the hole and projected an inverted image of the objects outside the room on the sheet opposite. He called this the “qamara”. It was the world’s first camera obscura.

A Muslim’s faith is based on purity and cleanliness, whether it is in its physical or spiritual form. In the Islamic world of the 10th century, the products found in bathroom cabinets and hygiene practices could compete with those we have today. In the 13th century, the same engineer, al-Jazari, wrote a book describing mechanical devices, including “wudhu” machines. This machine was mobile, and it was brought in front of a guest. The guest would then tap the head and water would ensue in eight short bursts, providing enough water for ablution. This method also conserved water.

Muslims wanted to be really clean and not just splash themselves with water, so they made soap by mixing oil (usually olive oil) with “al-qali”, a salt-like substance. This was then boiled to achieve the right mix, left to harden and used in the hammams, the bath houses.

Al-Kindi also wrote a book on perfumes called “Book of the Chemistry of Perfume and Distillations”. He was best known as a philosopher, but was also a pharmacist, opthalmologist, physicist, mathematician, geographer, astronomer and chemist. His book contained more than a hundred recipes for fragnant oils, salves and aromatic waters. The centruries-old tradition of perfume-making was all made possible by Muslim chemists and their methods of distillation: they distilled plants and flowers and made perfumes and substances for theapeutic pharmacy.

The quest for knowledge is close to the heart of Muslims. In the Quran, they are urged to seek knowledge, and to observe and reflect. So Fatima al-Fihri, a devout and pious young woman, wanted to give the Fez community a learning centre. Like some of the grand mosques, al-Qarawiyin in Fez soon developed into a place for religious instruction and political discussion. It gradually extended its education to all subjects, particularly the natural sciences, and so it earned its name as one of the first universities in history.

Apart from astronomy, there were studies of the Quran and theology, of law, rhetoric, prose and verse writing, logic, arithmetic, geography and medicine. There were also courses on grammar, Muslim history, and elements of chemistry and mathematics. This variety of topics and the high quality of its teaching drew scholars and students from all over. Still operating almost 1,200 years later, Hassani says he hopes the center will remind people that learning is at the core of the Islamic tradition and that the story of the al-Firhi sisters will inspire young Muslim women around the world today.

Abbas ibn Firnas was the first person to make a real attempt to construct a flying machine and actually fly. In the 9th century he designed a winged apparatus which roughly resembled a bird costume. In his most famous trial, near Cordoba in Spain, Firnas flew upward for a few moments, before plummiting to the ground and partially breaking his back. His designs would have undoubtedly been an inspiration for the famous Italian artist and inventor Leonardo da Vinci some six hundred years later.

If we journeyed back into the 10th century, we could look over the shoulder of a cutting-edge surgion called Abul Qasim Khalaf ibn al-Abbad al-Zahrawi, a man known in the West as Abulcasis. He wrote al-Tadrif, his medical encyclopedia which included a treatise called “On Surgery”. This held a staggering collection of over two hundred surgical tools. Using instruments for surgery was a revolutionary concept because it enabled science to change from being speculative to something experimental. This was the first treatise in the history of medicine to illustrate the use of surgical instruments. In fact, their design was so accurate that they have had only a few changes in a millennium. It were these illustrations that laid the foundations for surgery in Europe.

Maps have helped people find their way for about 3,500 years, the earliest ones being on clay tablets. The introduction of paper was a huge leap forward in the art of map making. Modern technology uses a system of satellites and other receiving devices to compute positions on the earth. Back in history, maps were made from travellers’ and pilgrims’ accounts. The bug of traveling had bitten the 7th century Muslims, and they soon began to leave their homes for trade and for religious reasons, to explore the world they lived in. They walked routes, sometimes simply gathering knowledge about new places, and when they returned they gave accounts of the ways they had trodden and the people and sights they had encountered. First this was by word of mouth, but with the introduction of paper in Baghdad in the 8th century, the first maps and travel guides could be produced.

Do 20th century artists and singers know that much of their craft lies in the hands of Muslims from the 9th century? These artists, al-Kindi in particular, used musical notation: the system of writing down music. They also named the notes of a musical scale with syllables instead of letters, called solmization. These syllables make up the basic scale in music today and we are all familiar with doh, ray, me, far, so, la, tee. The Arabic alphabet for these notes is Dal, Ra, Mim, Fa, Sad, Lam, Sin. The phonetic similarity between today’s scale and the Arabic alphabet used in the 9th century is astonishing. On top of that, Muslims were also developing musical instruments.

The word “algebra” comes from the title of a Persian mathematician’s famous 9th century treatise “Kitab al-Jabr Wa l-Mugabala” which roughly translates into “The Book of Reasoning and Balancing”. Al-Khwarizmi introduces the beginnings of the algebra. It’s important to understand just how significant this new idea was. In fact, it was a revolutionary move away from the Greek concept of mathematics, which was essentually based on geometry. The same mathematician, Al-Khwarizmi, was also the first to introduce the concept of raising a number to a power.