A Miracle of the Qur’an: Mother’s Milk – Ask A Muslim Skip to content 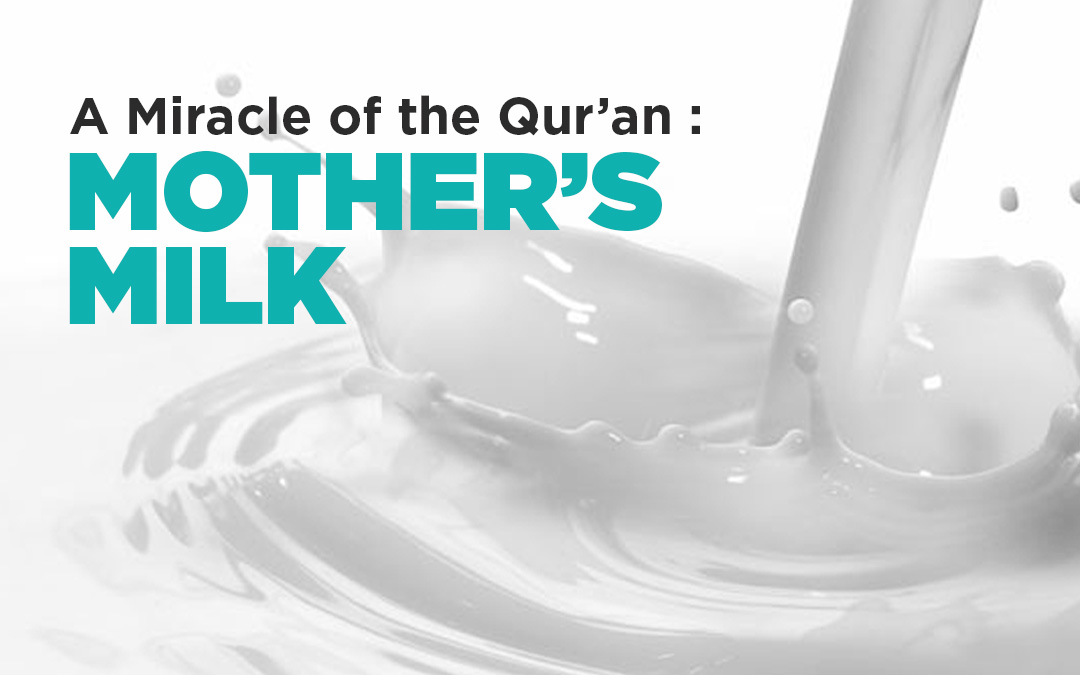 Fourteen centuries ago, Allah sent down the Qur’an to mankind as a book of guidance. He called upon people to be guided to the truth by adhering to this book. Allah refers to the Qur’an in one of His verses in this way:

Mankind! Admonition has come to you from your Lord and also healing for what is in the breasts, and guidance and mercy for the believers. (Yunus 10:57)

The matchless style of the Qur’an and the superior wisdom in it are definite evidence that it is the Word of Allah. In addition, the Qur’an has many miraculous attributes proving that it is a revelation from Allah. One of these attributes is the fact that a number of scientific truths that we have only been able to uncover by the technology of the 20th century were stated in the Qur’an 1,400 years ago. Of course the Qur’an is not a book of science. However, many scientific facts that are expressed in an extremely concise and profound manner in its verses have only recently been discovered in the 20th century.

These facts could not have been known at the time of the revelation of the Qur’an, and this is still more proof that the Qur’an is the Word of Allah. One of the scientific miracles hinted at in the Qur’an is the special creation of mother’s milk. Mother’s milk is an incomparable mixture created by Allah, not only to meet all the baby’s nutritional needs, but also to protect it from possible infection. The balance of food substances in mother’s milk is at the ideal level and in the best possible form for the still-growing baby’s physical systems. At the same time, mother’s milk is very rich in nutrients that promote brain growth and nervous system development. Baby foods produced with today’s technology simply cannot compete with this miraculous foodstuff. Every day reveals a new benefit that mother’s milk bestows on babies. Research has revealed that babies fed on mother’s milk are better protected from respiratory and digestive infections. That is because the antibodies in mother’s milk provide a direct defense against infection. Other anti-infective properties of mother’s milk are that it constitutes an obstacle to bacteria, viruses, and parasites, while establishing a friendly environment for “good” bacteria, known as “normal flora.” It has furthermore been established that elements of mother’s milk regulate the immune system and allow it to work more effectively against contagious diseases. Since mother’s milk has been specially designed for babies, it is the most easily digestible food they can eat. As well as being rich in nutrients, it is easily digested by the baby’s sensitive system. Since the baby thus expends less energy on digestion, the energy saved can go to other bodily activities: growth and organ development. There is more fat, protein, and the minerals sodium, chloride, and iron in the milk of mothers who have had premature babies. In fact, it has been established that premature babies fed on mother’s milk score better in intelligence tests and that their visual functions develop better. One of the facts that science has discovered about mother’s milk is that suckling for up to two years after birth is very beneficial. Allah gave us this important information-which was discovered by science only very recently-14 centuries ago with the verse:

And We have enjoined upon man goodness towards his parents: his mother bore him by bearing strain upon strain, and his weaning was in two years: (hence, O man,) be grateful to Me and to your parents; to Me is the eventual coming. (Luqman 31:14)

All that we have seen so far shows us that this provides clear evidence that the Qur’an is the word of Allah, Who is the Originator of everything and encompasses all things in His knowledge. In one verse in the Qur’an, Allah says:

If it had been from other than Allah, they would have found many inconsistencies in it. (An-Nisaa’ 4:82)

Not only are there no inconsistencies in the Qur’an, but every piece of information it contains reveals the miracle of this divine book more and more each day. What falls to man is to hold fast to this divine book revealed by Allah, and to receive it as the one and only guide. In one of the verses, Allah calls out to us:

This Qur’an could never have been devised by any besides Allah. Rather it is confirmation of what came before it and an elucidation of the Book which contains no doubt from the Lord of all the worlds. Do they say, “He has invented it?” Say: “Then produce a chapter like it and call on anyone you can besides Allah if you are telling the truth.” (Yunus 10:37-38)