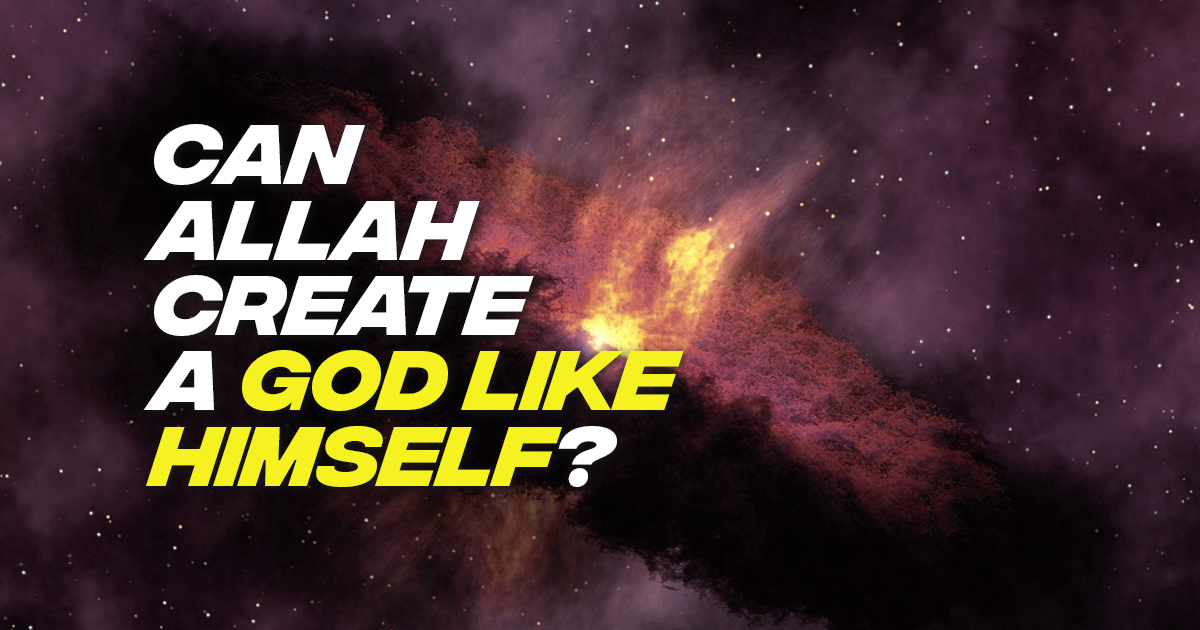 Some atheists ask questions such as, “If Allaah is able to do all things, can He create another god like Himself?” or “Can He create something so heavy that He cannot lift it?”.

Praise be to Allaah.

The atheist needs someone who will call him to Allaah and remind him of the blessing and signs of Allaah which point to His existence, Oneness and might.

The entire universe points to Allaah, may He be exalted, how can anyone deny it?

When God has a sign in everything that exists to point to His Oneness?

No attention should be paid to the specious arguments of the atheists and those who have gone astray, except by the one who is qualified to refute them. So we must be very cautious, because a specious argument may become settled in the heart, after which it is difficult to get rid of it.

This argument is one of the oldest specious arguments offered by the atheists, and the scholars have a well known answer to it, which may be summed up in two points:

1 – This matter is impossible, because if the other one was a god, it would not be possible to create him. To assume that he can be a god and be created is impossible.

It says in al-Durar al-Saniyyah min al-Ajwabah al-Najdiyyah (3/265): A story discussing a different issue was narrated from Ibn ‘Abbaas, which is that the devils said to Iblees, O our master, why do we see you rejoicing over the death of a scholar in a way that you do not rejoice over the death of a worshipper? For we cannot influence the scholar but we can influence the worshipper. He said: Go a worshipper, go to him when he is worshipping. They said: We want to ask you. He turned to them and Iblees said: Can your Lord create another like Himself? He said: I do not know. He said: Don’t you see that his worship cannot benefit him when he is so ignorant?

They asked a scholar about that and he said: That is impossible, because if he were like Him, he could not have been created, and the idea that he is created and is like Him is impossible. If he is created he is not like Him, rather he is just one of His slaves. He said: Don’t you see that this man can destroy in an hour what it took years to build? And Allaah knows best. End quote.

2 – The idea of another god existing alongside Allaah is inherently impossible. There is a great deal of evidence to suggest that it is impossible, the least of which is the existence of this organized universe. If there were another god, the system of the universe would be spoiled because they would compete with one another and each of them would want to prevail over the other, as Allaah says (interpretation of the meaning):

“Had there been therein (in the heavens and the earth) aalihah (gods) besides Allaah, then verily, both would have been ruined. Glorified be Allaah, the Lord of the Throne, (High is He) above all that (evil) they associate with Him!”

“No son (or offspring) did Allaah beget, nor is there any ilaah (god) along with Him. (If there had been many gods), then each god would have taken away what he had created, and some would have tried to overcome others! Glorified be Allaah above all that they attribute to Him!”

Ibn Katheer (may Allaah have mercy on him) said in his Tafseer: i.e., if there was a number of gods, each one of them would have taken away that which he created and the universe would be in disarray. What we see is that the universe is organized and orderly, and each realm, upper and lower, is connected to the other in the most perfect manner. “you can see no fault in the creation of the Most Gracious” [al-Mulk 67:3]. And each of them would seek to dominate the others and some of them would prevail over others.

The same applies to the creation of an object so heavy that Allaah could not lift it. It is impossible, because Allaah is the One who creates it, and He is able to destroy it at any moment, so how can He be unable to lift it?

The answer is: Because it is impossible, it is nothing.

The verse states that Allaah has power over “things” but that does not include things that are inherently impossible, because they are not things, rather they do not exist and they cannot be brought into existence.

Hence more than one of the scholars have stated that the power of Allaah has to do with that which is possible, for the reason that we have mentioned, which is that that which is non-existent and impossible is not a “thing”.

Shaykh al-Islam Ibn Taymiyah (may Allaah have mercy on him) said: As for Ahl al-Sunnah, in their view Allaah, may He be exalted, has power over all things, and everything that is possible is included in that. As for that which is inherently impossible, such as a thing both existing and being non-existent, there is no reality in it and its existence cannot be imagined, so it cannot be called a “thing” according to the consensus of the wise. This includes the idea of creating another like Himself, and so on. End quote from Manhaaj al-Sunnah (2/294).

Ibn al-Qayyim (may Allaah have mercy on him) said in Shifa’ al-‘Aleel (p. 374): Because that which is impossible is not a “thing”, so His Power has nothing to do with it. Allaah has power over all things and no possible thing is beyond His power. End quote.