Did Allah create universe in 6 or 8 days? – Ask A Muslim Skip to content 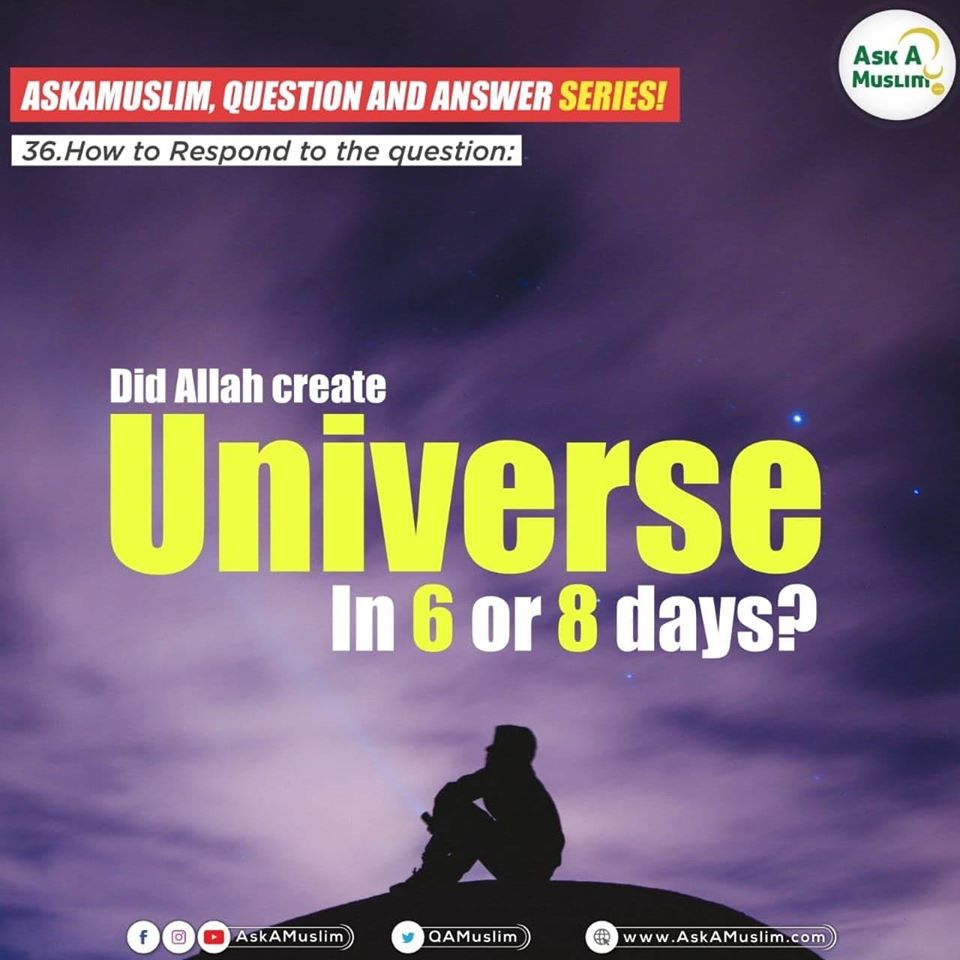 The three words [measured. created. completed] are different from each other clearly..

Firstly, about creation: (created the earth in two days)

Third one, the terminology is talking about completion of the ( seven heavens in two days).

So, It is not permissible to combine these three things and say they have one meaning maybe you do this because you are accustomed to trinity or whatever. Lol

Because each number has a different meaning.

Therefore the Quranic Ayats (Verses) here do not contain only one meaning but speaks about three distinctive meanings of
👇🏻
1. Creation, when saying: (created the earth in two days),

the Aya that talked about heaven, does not mention the creation of the heavens, but states God’s completion of the sky to become the seven heavens during two days (completed them seven heavens in two days)

👉🏼 meaning that the
🎈sky🎈 existed and created in advance and the
♦️days♦️
are to separate the
🎈heavens🎈
from each other.

Thus, there is no contradiction in this and other sacred Quranic texts.

In order to emphasize that the Almighty Allah when he speaks of creation speaks of measuring of sustenance as if they were two separate things, that creation is not the same as determination or measuring, whether in meaning or order.

Creation is first and then the measuring and organization are Second.

as the Almighty said:

((and created everything Has created each thing and determined it with [precise] determination)).
● [Al-Furqan: 2].

He said of the creation of man: ((From a sperm-drop He created him; so He determined (made him according to a measure) him.)) [Abs: 19].

Thus, creation is first and then comes completion and thirdly organization and making the creature configuration appropriate to what’s created.

🎀Thus we deduce the following for you:

👉🏼The earth created in two days.

👉🏼Earth establishment, mandate and mountains are created in other two days as a completing number not an additional one.

So far, we have four days

2 for the earth creation and 2 for its mandate and mountains. or say the measurement.

The meaning is (in the completion of 15 days I arrived to France).

The heavens in 2 days

Say, “Do you indeed disbelieve in He who Created the earth in two days and attribute to Him equals? That is the Lord of the worlds.”

And He placed on the earth firmly set mountains over its surface, and He blessed it and determined therein its [creatures’] sustenance in four days without distinction – for [the information] of those who ask.

Then He directed Himself to the heaven while it was smoke and said to it and to the earth, “Come [into being], willingly or by compulsion.” They said, “We have come willingly.”

And He completed them as seven heavens within two days and inspired in each heaven its command. And We adorned the nearest heaven with lamps and as protection. That is the determination of the Exalted in Might, the Knowing.

This is because heavens and earth are created in two days

The overall of universe organization, creation and measurement are 6 days not 8 as some might count falsely.

That was the response to this

Quran 41:9 Is it that you deny Him who Created the earth in Two Days ?

He set on the (earth) Mountains standing firm high above it, and bestowed blessing on the earth, and measured therein all things to give them nourishment in due proportion, in FOUR DAYS…

Quran 41:12
He completed them (heavens) as seven firmaments in Two days and …

Now we do the math:

No + for heavens because Allah says
👇🏻
7:54
“Who created the heavens and earth in six days ”