Why does a woman inherit half of a man in Islam? – Ask A Muslim Skip to content 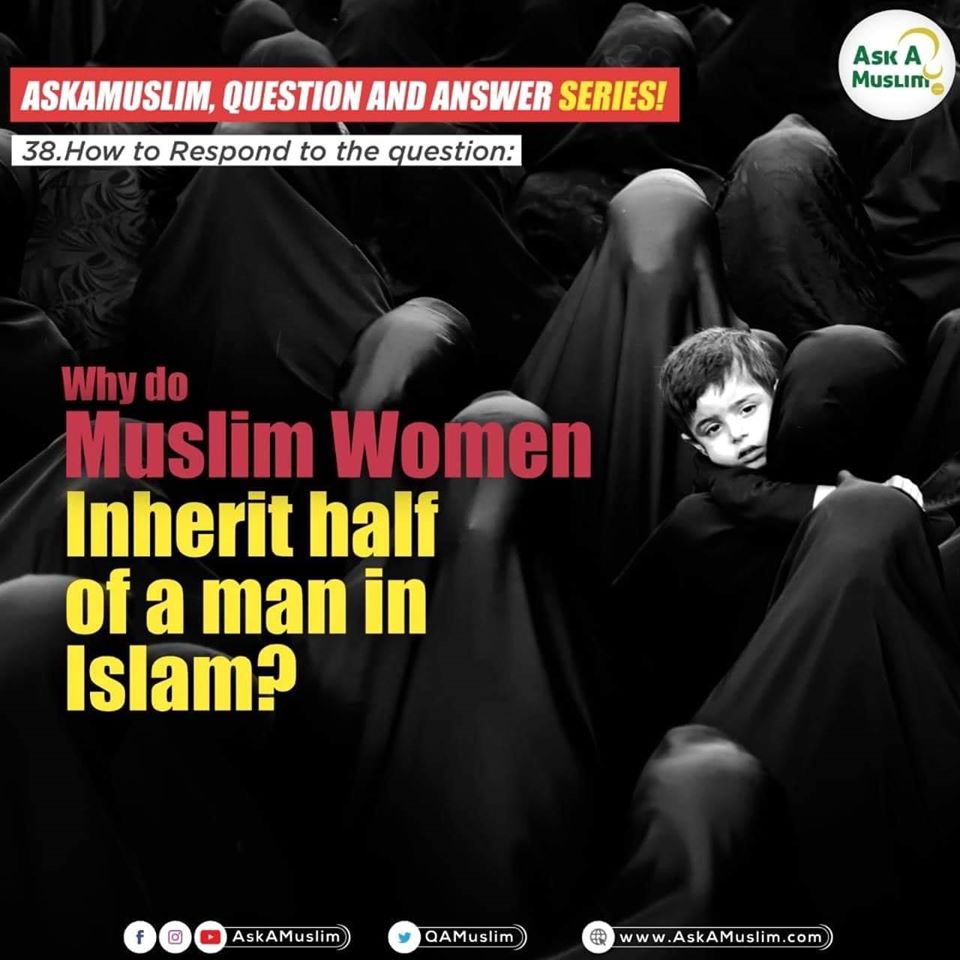 ⚫A woman inherits less than a man?

Yes she does. A woman can also inherit more than man? yes she can.

Talking about depriving women of inheritance, the modern Bible has deprived the right to inherit except in the case of being not male, the daughter does not inherit from her father except if he has no son.

In the book of Numbers 27:8👇
“If a man dies and has no sons, then you shall pass the inheritance to daughters”

🕋ISLAMIC VIEWS ON INHERITANCE OF WOMEN

God is a fair judge
His injustice is absolute

1. The degree of kinship to the deceased

2. The generation to which the heir belongs

🚦👉💐Islam outlines 34 situations of inheritance
.
🕋FACTORS OF HOW THE INHERITANCE IS SHARED AMONG THE HEIRS

1- Relationship between the deceased and the surviving relatives,the closest receive more.

2- Position of the Heir, (the new generation who’s ready to start life and shows responsibility receive larger share in most cases.

3- The financial responsibilities of each Heir, and this is particularly of important consideration.

2- He looks after wife and children even when his wife is rich. Indeed a fair distribution of Rights and Duties. It is worth knowing that no human system has ever established a law under which women were guaranteed to be looked after by men in all situation.

🕋Islam the system given to Us by the Lord of Mankind has a different outlook. Under Islam a man is to maintain his mother, wife, daughters and sisters when she they have no father and no husband.

⚪⚫In a man made laws, women are required to earn their own living. When a woman loses her father and husband then she must look after her children and that’s a heavy responsibility that breaks the back of many women. She’ll not be able to fulfil the maternal responsibility to satisfaction.

Islam.. compassion of religion gives a woman a fair share of inheritance and requires a man to ensure that she’s well looked after.

So them “which legislation do you prefer”

Humanly made or Godly?

💐🗣Cases Where Women Inherit and Men Do not
1. If a woman leaves her husband, father, mother, daughter, and son’s daughter and her estate is worth $195,000, then the son’s daughter inherits one-sixth [$26,000]. However, if the woman leaves a son’s son instead of a son’s daughter, then his share will be zero, because he is a residuary who would inherit the remainder but there is no remainder. This distribution is different from the law of obligatory bequest applied in Egyptian Law No. 71 of 1946, which contradicts the Islamic Schools of Thought. Here, I mean the authentic schools that maintain that women inherit in some cases, while men do not.

Thus, there are more than thirty cases where a woman inherits the same as or more than a man, or where she has a share and he does not. In contrast, there are only four cases where a woman inherits half the share of a man. These are the results of examining the cases and issues in the law of inheritance. I think that this misconception is now clear
▪︎▪︎▪︎
Source:
https://www.sailanmuslim.com/…/inheritance-according-to-is…/