➡️ The Holy Qur’an is the Speech of Allah which He revealed to our Prophet Muhammad by the Angel Gabriel and revealed in stages over a period of 23 years.

👉🏼The Quran is core to Islam👈🏼

Believing in it is a requirement,  One who does not believe in the Quran, in its entirety, cannot claim to be a Muslim☹️

2️⃣the authentic narrations of Prophet Muhammad, that explain the Quran.

✨✨ Prophet Muhammad was commanded by Allah to convey the Quran to all of humankind and the responsibility weighed heavily upon him.

⭐️The Quran explains the concept of God, it explains in detail what is permissible and what is forbidden, it explains the basics of good manners and morals and gives rulings about worship.
⭐️It tells stories about the Prophets and our righteous predecessors, and describes Paradise and Hell.
⭐️It is also important to understand that the Quran has remained unchanged for more than 1400 years.

Today when a Muslim in Egypt holds his copy of Quran in his hands and begins to recite, you can be sure that in far away another Muslim is looking at and reciting the exact same words. There are no differences..🌼🌼

♦️🔶 The child in France🇫🇷 holding his first copy of Quran is for sure reciting the same words that flowed from the lips of Prophet Muhammad.
👌🏼Allah assures us in Quran that He will surely protect His words.
💚He says, “Indeed, it is We who sent down the message [i.e., the Quran], and indeed, We will be its guardian.” (Quran 15:9)

This means that God will guard against anything false being added or any part of it being taken away.
👉🏼One of the ways in which it was preserved was that the men, women and children around the Prophet Muhammad memorized Quran, paying careful attention to each word.

🌻In the very early days of Islam the emphasis was on memorization, however soon, those who had mastered the art of reading and writing began to write down the words of Quran on whatever writing material available
They wrote on flat stones, bark, bones, and even animal skins.
👉🏼As the words of Allah were revealed, it is said that prophet Muhammad would call for a scribe to write down the words as they began to flow from his lips.

In the lifetime of the Prophet, the Quran existed on bits and pieces of writing material, rather than in book form.

🌸When the Angel Gabriel would reveal the divine words of Quran from God to the prophet Muhammad , he would also issue instructions by Allah’s command, as to what verses and chapters belonged. 💛💕
Therefore the Quran was written down under the direct supervision of Prophet Muhammad.

Uthman, one of the Prophet’s closest companions said :

“when something was revealed to him, Prophet Muhammad would call someone from amongst those who used to write for him and say, ‘place these verses in the chapter in which such and such is mentioned’ and if only one verse was revealed he would say, ‘place this verse in this chapter’”
And at the time of the Prophet’s death pieces of Quran were held in trust by many members of the Muslim community.🌻🌻🌻

☹️After the prophet’s death, Battles and skirmishes took place and many of the men who had memorized the Quran lost their lives.
👉🏼So Abu Bakr, the leader of the Muslim nation after the death of Prophet Muhammad, was afraid that the Quran would be lost, so he consulted some of the senior companions about compiling the Quran into a single book. 💜💛

And this is the story of The Holy Quran , the truth about Allah , His genuine speech whom He promised to guard forever in order to let His guidance prevail at all times and give the people the knowledge they need to know about the truth of this life and the hereafter🌺🌺🌺🌺🌺

🌟What Does Belief in the Quran include?/ What is our duty towards Quran?🌟

1. 🎁To believe that it was truly revealed by Allah.

2. 🎁To believe that it contains the speech of Allah .

3. 🎁To believe the stories mentioned in it.

4. 🎁To believe that the prophet Muhammad delivered the Quran and didn’t write it.

🌸We’re now done with the Quran✅
Let’s see what is meant by Sunnah?🤩

➡️The Sunnah is a collection of the sayings and actions of Prophet Muhammad (peace be upon him) as recorded by his companions and their students.💛

🌟The fact that there are thousands of these recorded and rigorously authenticated makes it very easy for anyone to follow Prophet Muhammad (peace be upon him) correctly.

The message of Prophet Muhammad is in complete harmony with the teachings of the previous Prophets, and reaffirms their message. ✅👌🏼

We know that Prophet Muhammad (peace be upon him) is the final Prophet for all mankind from his time up until the end of time, including current and future generations. 🌻🌻🌻

He was a perfect example of an honest, just, merciful, compassionate, truthful and brave human being.♥️

He, like other Prophets before him, did not have any evil characteristics and strove solely for the sake of Allah.♥️

👉🏼⁦1️⃣⁩ Informative revelation: God would inform the prophet Muhammad of something by means of revelation in one form or another as mentioned in the following Quranic verse:

“It is not for a human being that God should speak to him except as revelation or from behind a barrier, or by sending a Messenger who reveals by His leave whatever He wishes.  Verily, He is Exalted, All-Wise.” (Quran 42:51)

“Sometimes, the angel comes to me like the clanging of a bell, and this is the most difficult for me. It weighs upon me and I commit to memory what he says. 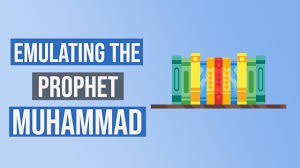 So Why do we have to follow the sunnah of the prophet Muhammad and not just follow the quraan ?🤔🤔

(1)🌺 The Qur’aan speaks of the importance of the Sunnah, for example:

(b) Allaah warns us not to go against the Prophet (peace be upon him), and states that whoever disobeys him will be doomed to eternal Hell.

Allah says (interpretation of the meaning): “. . . And let those who oppose the Messenger’s commandment beware, lest some fitnah (trial, affliction, etc.) befall them or a painful torment be inflicted on them.” [al-Nur 24:63]💛

(c) Allaah has made obedience to His Prophet a religious duty💛

Resisting or opposing it is a sign of hypocrisy

“”But no, by your Lord, they can have no Faith, until they make you [Muhammad] judge in all disputes between them, and find in themselves no resistance against your decisions, and accept (them) with full submission.” [al-Nisaa’ 4:65]

(d) Allaah commands His slaves to respond to Him and His Messenger: “O you who believe! Answer Allaah (by obeying Him) and (His) Messenger when he calls you to that which will give you life . . .” [al-Anfaal 8:24]💛

How did the Sunnah reach us?