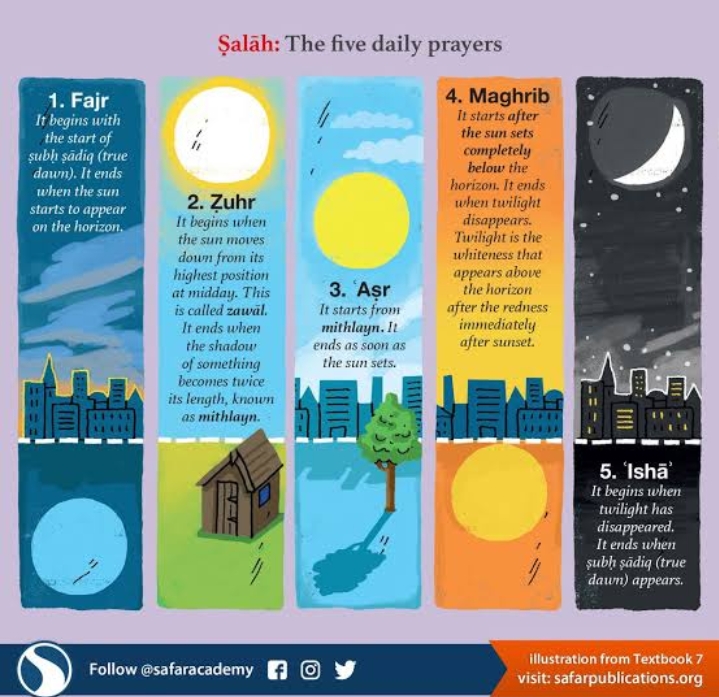 ♦️Prayer (salah; plural salawat) is one of the five pillars of Islam. It is incumbent upon all mature Muslims, and highly recommended for children aged ten and over, to complete their five daily prayers .

♦️ Prayer is a Muslim’s communication with Allah. Prayer purifies and cleans your mind five times a day, and serves to bring peace to your life. Prayer is a man’s way of thanking Allah and reminds him that Allah is watching over his life, giving him the courage to face even the toughest of times.

⭐️ 1 _ Ensure the area is clean and free of impurities.

This includes 🌹 your body, 🌹 your clothes, and 🌹 the place of prayer itself.

♦️🔶 your clothes :
i ) Make sure all of your necessary parts are covered and cleaned. The nakedness of a man is considered to be between the navel and the knees; for a woman, her entire body except the face and palms.

🔶⁦♦️⁩ Your body :
i ) you should perform Wudoo.
ii ) your body should be clean.

🔶⁦♦️⁩ The Place : If you are unsure of the cleanliness of your area, spread a mat or cloth on the floor for good measure. This mat (or prayer rug) is very important to Islamic culture.

This is the direction all Muslims face to turn in prayer toward Kabah.The Holy Mosque in Mecca is the most revered place of worship for Muslims around the entire world. At the center of the mosque is the Ka’ba. All Muslims are required to face the Ka’ba five times every day when offering their prayers. To know the face of Qibla islamicfinder.org/Qibla-Direction/

The five prayers of each day take place at very specific times. For each one, there is a brief period of time it can be performed, determined by the rising and falling of the sun , to know times of prayers 👉🏻 islamicfinder.org/ . Each salah takes about 5 to 10 minutes from start to finish, but should never be hurried.

We -muslims pray five obligatory prayers per day at 5 specific times ⏰ , these prayers are timed by the sun movements🌞.

🌻Zuhr (midday, after the sun passes its highest)

🎁Prayer in islam is not just supplications as people may think,
Islamic prayer consists of special movements in addition to Quran recitation and specific supplications included in every movement 🎁 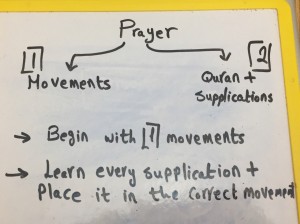 ♦️🔶We must recite (Al fatiha) in each unit of Salah so we must Memorize it by the heart.

🕌🕌The importance of Al fatiha: 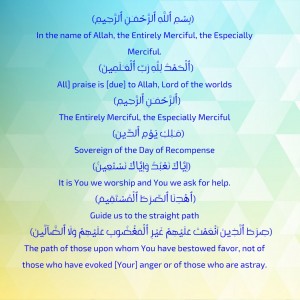 ✨✨It’s a sentence that we must say before reading Quran:

“So when you want to recite the Qur’aan, seek refuge with Allaah from Shaytaan (Satan), the outcast (the cursed one)”

✨✨What seeking refuge with Allaah means is turning to Allaah for protection from the evil of every evil one. It is said in order to ward off evil from a person. It is as if the one who says it is saying: I am seeking refuge with Allaah from the accursed Shaytaan lest he harm me in my spiritual or worldly affairs, or he prevents me from doing what I have been commanded or he makes me do something that I have been forbidden to do.
___________________
💎💎We say this statement also …when we feel we are going to make a sin …

Just note what made devil “alshytaan” enters hell is the following. .

When Allah chose Adam to give him the authority of the earth ..shaytaan felt envy and pride …how this human that was created from mud is better than him …

He did three sins
1.Felt proud of himself and he is better than others
2.disobeyed Allah’s order
3.Insisted on his and didn’t repent to Allah
Being stubborn even knowing he is on the wrong way..

🌿🌿Lessons to learn are..

1.never feel pride and better than others
We are all the same ..
No one has the right to judge others ..
consciousness is only judged by Allah.

3. Submit to Allah’s orders.
This the true meaning of Islam …Submitting to Allah
He knows best …Trust Him

🌿 In the name of Allah, the Entirely Merciful, the Especially Merciful

We say this verse in the starting of any action in our lives ..

I am asking Allah to give me support for what I am going to do ..
To send His blessings and Mercy down .

Every big or small action you may ever think ..

1.Follows Allah’s instructions
He started the Holy Quran with BismiAllahi r-rahmani r-rahim.
We need to follow and start everything in our life with it .

2.Be convinced that Allah will support you and bless your action .

3.Allah will be your focus and you will remember Him all the time

4.You will minimize doing sins as you can’t doing bad things while you started saying Allah’s words.

🔶♦️ Now we are going to learn the meaning of the second verse..🕌🕌

🔅Allah SWT..asks us to keep thanking Him all the time. .
And look how Merciful He is .He made us say it in Al-Fatiha ..even if we didn’t realize ..

🔅you start your day with Salah Alfajr …first thing you do in salah is thanking Allah when you say AlhamdulliAllah..

That means ..
thanks Allah for giving me time to pray for you …to have another day in life to worship you..
Thank you that you helped me to pray and guided me to the right path.
This thanking state make you feel grateful towards Allah.

🔅رب
🔶♦️{ rabbi}
means Lord
Allah talks about Himself with the name Rab..

🔅العالمين ..
♦️🔶{ l-alamin}
Means worlds. .
Just to know that we are not alone in this life ..Allah created other worlds that we may discover or we may not ..
Also there are other creations like angels(created from light) and Jin(created from fire)…
There are other planets too.
And Allah subhanaho wa Talaa are responsible of All of these worlds and creations.

💎Keep thanking Allah every time in the day especially when starting your day keeping in mind all the intentions we discussed before .

💎Thank Allah in difficult times and in good times

Result ..
You will be a Positive Person feeling inner Peace and satisfaction.

Both the names al-Rahmân and al-Rahîm are derived from the Arabic word rahmah, meaning mercy.

✨✨al-Rahmân denotes “general mercy for all of creation” while al-Rahîm denotes “specific mercy for the believers alone.”

✨✨Another opinion is that the difference between them is that al-Rahmân denotes the presence of the attribute of mercy, while al-Rahîm refers to the expression of Allah’s Mercy and its affects on Creation. This is the opinion of Ibn al-Qayyim.

Disbelievers disrespect God and doesn’t worship Him as He requested …But He still sends upon them His mercy exactly as the believers..
(Sends food ,water,money,health, shelter,guidance messages,etc…)

🔶⁦♦️⁩Lessons to learn
—————————–
🔅God “Allah” is Merciful with the disbelievers so we need to follow His steps and treat them in a decent respectful way.
🔅No one will care about you as Allah cares …so you should turn to Him always.

It means:
Sovereign of the Day of Recompense.

💎💎An owner has the right to do what he wants with what he owns.
The difference between Allah’s ownership and ours is that His is absolute while every human ownership is limited.

💎💎He is the only One who decides what punishment or reward they deserve. It is out of His mercy He has told us through His Prophet what His rules are and how we should behave.

♦️🔶what happens in the hereafter:
———————————————–
♦️On the Last Day everyone else’s temporary ownership they exercised in the world will have come to an end.

♦️No one will be able to speak without Allah’s permission. The rulers and ruled of the world, slaves and freemen will be reduced to equals.

♦️The majesty and glory of Allah will make everyone equally humble in front of Him. Each desiring His reward and fearful of His punishment.

♦️The ownership and rule of the Last Day has been highlighted as it will show the full extent of Allah’s Ownership and control.

✨♦️🔶Lessons to learn :
============
1.Allah said Alrahman Alraheem before this verse to tell you that no one will enter heaven in the judgement day except with His Mercy even Prophet Muhammad .

2.Ask Allah to grant you His Mercy.

3.This is the purpose of our life ..we are in a test ..It’s an open book test .At the end every one will be evaluated according to the way He filled his book…either good deeds or bad ones.

We must continue to memorize Surat Al-Fatiha by heart
✨✨🏆💎👏👏

It means:
It is You we worship and You we ask for help.

⁦♦️⁩🔶The benefits of mentioning ‘worship’ before ‘asking for help’..

1- It emphasises the right of Allah to be worshipped before the right of man to seek His help.
2-Asking for help from Allah is considered a form of worship in Islam.
3- This is an example of mentioning something general ‘we worship’ and then mentioning a specific type of worship ‘we ask for help’.

Means guide us to the straight path.

💎🏆As Muslims were already guided..Why are they asking for guidance again??🤲🤲

Guidance in Islam is of two types.
One is to show a person what road to travel down. It also means to help a person take the road and stick to the road.
Guide me on’ means give me the ability to take this path and stay on it in every issue

✨✨What the benefit of repeating this prayer in every salah?
This dua is the most comprehensive and beneficial dua a person can make, that is why Allah made it obligatory for a person to say it in every prayer. If we think about it, we will realise that it is a sign of the mercy of Allah. It is out of His mercy that He taught us the most beneficial dua (prayer) for our life and Hereafter.

🔶♦️Repeat after this video to can memorize Al Fatiha by your heart.👆👆👆

The path of those upon whom You have bestowed favor, not of those who have evoked [Your] anger or of those who are astray.

{The path of those upon whom You have bestowed favor,}

🔶♦️They are the Prophets, The Truthful (siddiqeen), The Martyrs (shuhada) and The Righteous (saliheen). These categories are clarified later in the Quran: And whoever obeys Allah and the Messenger – those will be with the ones upon whom Allah has bestowed favour of the prophets, the steadfast affirmers of truth, the martyrs and the righteous. And excellent are those as companions.

{not of those who have evoked [Your] anger }

➡️They are people who recognised the truth but did not follow it, such as the Jews and those who are like them.

{ or of those who are astray}

♦️🔶They are those who are lost, because they left the truth through their ignorance, such as the Christians and those who resemble them.

🔶♦️knowledge and learning is essential to have fear of Allah in your heart.

“Only those fear Allah, from among His servants, who have knowledg”Quran (35:28)”