Salvation in Islam (part 3 of 3): Repentance 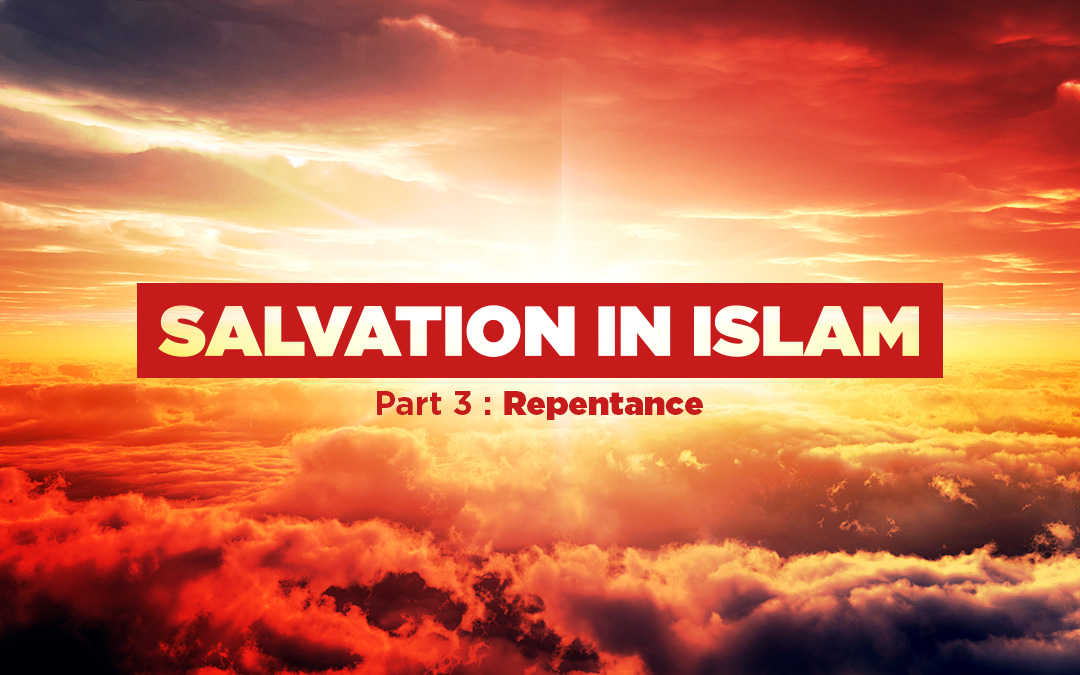 The road to salvation is through certain belief that there is only One God and that He is Oft Forgiving and Most Merciful.  Islam states unreservedly that there is no such concept as original sin and that God does not require a blood sacrifice in order to forgive humankind for their sins and transgressions.

“Say: “O My slaves who have transgressed against themselves (by committing evil deeds and sins)! Despair not of the Mercy of God, verily, God forgives all sins. Truly, He is Oft Forgiving, Most Merciful.” (Quran 39:53)

Making mistakes, falling short in our obedience to God, forgetting, and committing sins are all part of the imperfect nature of humankind.  No human being is free from sin, no matter how good we appear to be and every human being is in need of God’s forgiveness.  Prophet Muhammad, may the mercy and blessings of God be upon him, was keenly aware of this when he spoke to his companions.

“By the One in Whose hand is my soul, if you did not commit sin God would do away with you and bring people who would commit sin then pray for forgiveness.”[1]

“Every son of Adam sins and the best of those who sin are those who repent.”[2]

We are all vulnerable, we all commit sins, and we all need to be forgiven.  We have an innate need to feel close to God and God in His infinite wisdom has made the path to forgiveness easy.  Prophet Muhammad himself experienced the sublime joy that came from feeling “right” with his Lord. He said, “By God, I seek the forgiveness of God and I turn to Him in repentance more than seventy times each day.”[3]

God, the Creator knows humankind perfectly, He knows our imperfections and our shortcomings, and thus He has prescribed repentance for us and left the door to repentance open until the sun rises from the west (near Judgement Day).

“And turn in repentance and in obedience with true Faith to your Lord and submit to Him, before the torment comes upon you, then you will not be helped.” (Quran 39:54)

“O you who believe! Turn to God with sincere repentance! It may be that your Lord will expiate from you your sins, and admit you into Gardens under which rivers flow (Paradise)…” (Quran 66:8)

Repentance is as easy as turning to God and seeking His mercy and forgiveness.  In the darkest hour or longest night, God is waiting for all to ask of Him, and to repent to Him.

There are no transgressions too small or sins to big that God will not be merciful to the one who calls on Him.  Prophet Muhammad, may the mercy and blessings of God be upon him, told the story of a man whose sins seemed to be too big for him to ever have hope of mercy, but God is most wise and oft forgiving.  Even those whose lives seem shattered beyond compare and blackened by sin, find comfort.

In another version from the traditions of Prophet Muhammad, may the mercy and blessings of God be upon him, it says, the man was closer to the righteous town by a hand span, so he was counted among its people.[6]

Repentance is essential for a person to lead a peaceful life. The reward of repentance is a good life close to God and covered with contentment and peace of mind.  However, there are three conditions to repentance.  They are, giving up the sin, feeling regret forever having committed the sin and resolving never to go back to the sin.  If these three conditions are fulfilled with sincerity then God will forgive.  If the sin was to do with the rights of another person then there is a fourth condition.  That is to restore, if humanly possible, the rights taken away.

God’s mercy and forgiveness are so all encompassing that He will go on forgiving. If a person is sincere, God will forgive him until the moment that the death rattle reaches the throat.

The noted Islamic scholar Ibn Kathir said, “Surely, when hope in continued living diminishes, the Angel of Death comes forth to collect the soul. When the soul reaches the throat, and is gradually pulled out, at that point there is no accepted repentance.”.[7]

Genuine repentance marks the road to salvation.  Salvation is attained through sincere worship of God.  There is no God but He, the most powerful, the most merciful, the most forgiving.[8]