What Do Muslim Do When Santa Comes? – Ask A Muslim Skip to content 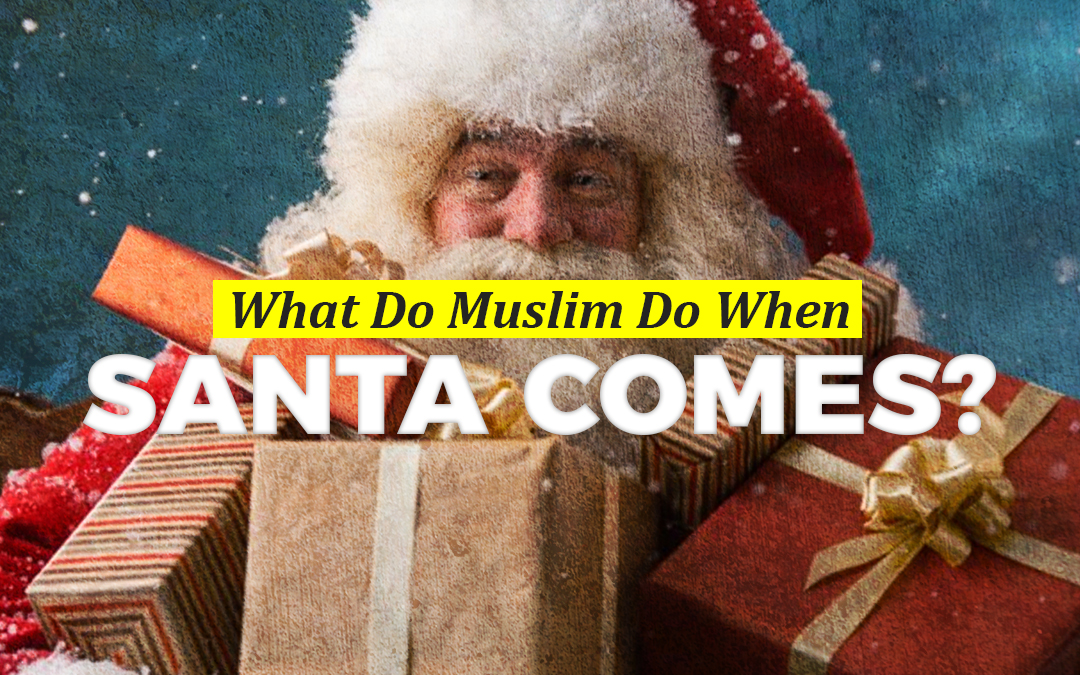 Muslims living in the west are faced with the question of what to do when they are asked to participate in Christmas celebrations, gift giving, and parties.

On the one hand, they have a shared reverence for Jesus Christ.  Muslims  honor him and they value everything that he bought as the next to the last Prophet sent by Allah.

Unfortunately, Muslims today are faced with the fact that modern day Christianity, with its celebrations, is more a product of modern day paganism than the religion of Jesus.

In public schools throughout America, Muslims students have to walk into schools with Christmas trees and lights, watch their teachers play Secret Santa, watch their Christian classmates exchange Christmas gifts, and sing Christmas songs in music class such as “Jingle Bells” and “Rudolph the Red-Nosed Reindeer.” They also attend assemblies with Christmas carols and Christmas plays.

As a public school teacher, I am faced with watching students go to Secret Santa workshops to buy gifts and observe a week-long Secret Santa gift exchange where teachers secretly pull names and for a week put a gift in another teacher’s class until the final day when the Secret Santa is revealed.

One element of Christmas that drives many people into a depression is the excessive shopping, and the pressure to buy gifts they cannot afford. The gift buying pressure can cause people to take on large debt on their credit cards and end up in bankruptcy.

Children will face constant pressure to conform and participate in Christmas in some way or another if they attend public schools in the west.  The only way to avoid the bombardment of Christmas festivities is to send your children to Muslim schools and stay away from shopping malls and the television from November to January.  If you are unable to do this then be prepared to explain to your children why it’s not good to participate in the multitude of Christmas festivities.

As a mother of school aged children, I have sent notes to the teacher at the beginning of the school year explaining that they are Muslims and outlining the things they are not allowed to do in school.  While some teachers will respect your notes, others will totally ignore them or have to be constantly reminded.

The Spell of Christmas and Our Kids

When my three year old son first saw the Christmas commercials on television with Santa and his reindeer, he jumped up screaming gleefully, “Christmas, Christmas!” I told him that Muslims don’t celebrate Christmas. He asked why and I explained that Allah does not like it and Muslims are put on earth to please Allah and worship Allah.

At nighttime when we drive by our neighbor’s houses which are decorated with lights, Santa, and the reindeer, we explain that while it may look very pretty, Allah does not like this. Everything that looks beautiful and good is not especially if it’s done for the wrong reason.

This is another reason why Muslims should make the effort to make `Eid special for their children and not just a day to take off school and go to the Masjid.

This is their time to have fun and enjoyment.  This is a good time to visit the school and ask the teacher if you could give a short talk on `Eid so their classmates will know that they too have a special holiday.

Muslim children should be encouraged to not be shy about their religion. They should not have an inferiority complex or feel sad that they don’t celebrate Christmas.  Parents need to talk to their children and volunteer in the schools to encourage teacher support. Bring in a desert to share with the class during `Eid time so they will know that Muslims are your neighbors and friends.

When Muslim parents sit down with their children and talk about Christmas, they need to share with their children the story of Jesus’ birth in the Qur’an.  They need to explain to them that the best explanation about Jesus comes straight from the words of our Creator, in the Noble Qur’an Surah 19, verse 20 – 35:

“She said: How can I have a son, when no man has touched me, nor am I unchaste?He said: So (it will be), your Lord said: that is easy for Me: And (We wish) to appoint him as a sign to mankind and a mercy from Us (Allah), and it is a matter (already) decreed.So she conceived him, and she withdrew with him to a far place…..”

Be Ready When Santa Comes

The key difference between Muslims and Christians with respect to Christ is that Muslims believe that since Christ worshiped God, and since Christ ordered people to worship God, that true believers should obey him and worship God alone.

Christians, on the other hand, changed the religion of Jesus and combined the religion of Jesus with Roman paganism to allow the people to know Christ.  In doing so they replaced one of the Roman idols (called Mithra) with the person of Christ to make things easy for the people to accept.  The Roman idol Mithra had a symbol of the cross and was the son of a greater god and was born on the 25th of December.

Emperor Constantine converted from pure paganism to the new found Roman Christianity and made it the official religion of Rome.  He put together a council in 325 A.D. to compile an official Bible which reflected this new Roman paganistic mixture of the teachings of Jesus with the heretical teachings of Paul. Emperor Constantine burned all of the original manuscripts and killed anyone who could speak the language of Jesus (Aramaic) to ensure no one would learn of the real teachings of Christ.

The bottom line is that when Santa comes, Muslims need to be forefront in educating their neighbors, peers, classmates, and colleagues on the true religion of Jesus and giving a true example of how to be a follower of Jesus which entails worshiping the creator and not creation, being honest, charitable, and of good character.

It is this example that will cause our neighbors to become curious about Islam and want to know more about the true religion of God.