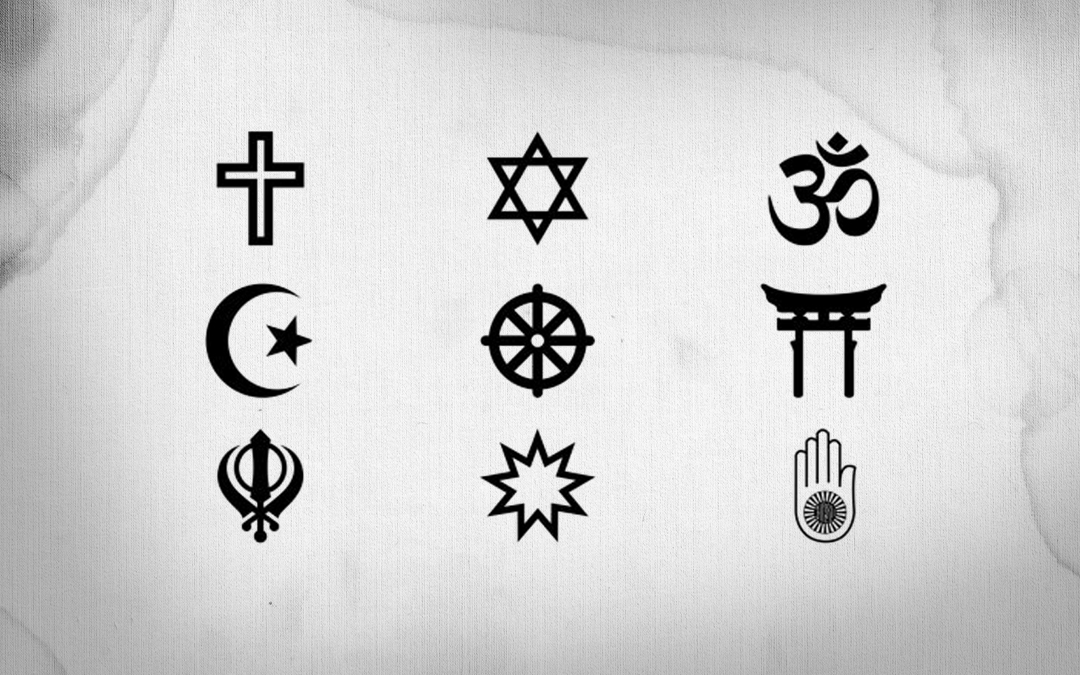 Question: What are the origins and meanings of the Christian Cross, Star of David, and the Crescent and star? Thank you.

Thank you for your question and for contacting Ask About Islam.

With regard to the origins of different religious symbols, I will explain the history of the four examples you mentioned in the question in details.

The chief symbol of Christianity today is the cross. Christians view it as a powerful symbol of redemption. It was St Paul who said he would glory in “naught save in the cross of our Lord” (Galatians 6:14).

Yet the cross had been a common religious symbol centuries before Christianity for several nations worldwide.

Pictures of the various forms of crosses held sacred by the ancients would be a hardly pleasing sight for people. Like many icons and symbols of Christianity, the cross was adapted from paganism.

It was in 707 C.E that the Council of Constantinople decreed that a cross with the figure of Jesus nailed to it should be held as a Christian icon.

Until then, a god who would be nailed to a cross to suffer and die was quite abhorrent to the Semitic religious consciousness.

Paul was being typically opportunist when he spoke of the “cross of Christ”, because he knew how it would conveniently appeal to the pagans.

The worship of the crucifix was a continuation of the pagan cross worship, as it was well-recognized as a religious symbol long before the dawn of Pauline Christianity.

The Cross Before Jesus

The ancient Egyptians had long before adopted this symbol in their worship of their pagan gods. Countless Egyptian drawings depict the gods holding crosses in their hands.

Among them was the Egyptian savior Horus, who is also pictured as an infant sitting on his mother’s knee with a cross on the seat they occupy.

The most common of the crosses used by these Egyptians, called “the Crux Ansata”, was eventually adopted by the Christians.

Osiris, the Egyptian savior and god of the dead and the underworld, is sometimes represented holding out this cross to mortals signifying that he has discarded mortality for the life to come.

The vestal virgins, devoted to the goddess Vesta of the Roman religion, who took an absolute vow of chastity punishable if broken by burial while alive, always wore a cross as a pendant round their necks just as nuns do today. (Christian Symbols, last accessed September 13, 2011)

The Star of David

The Star of David, or the hexagram (also known as “the Magen David”, which literally means “the Shield of David”), is now the most common and universally recognized symbol of Judaism.

But both within and outside of the Jewish community, it achieved this status only in the last two hundred years. Before that, it was chiefly associated with magic or painted on the badges of individual families or communities.

The Jewish religion, which prohibits images of God, has always been opposed to its representation by any symbols, and neither the Torah nor the Talmud recognizes any such emblem.

Besides, the Star of David is not mentioned in rabbinical literature. It probably did not originate within rabbinism, the official form of Judaism for more than two millennia.

Jewish books and ancient artifacts do not give credence to link the Star of David to King David himself; rather, all the available sources suggest that the early use of the hexagram was limited to “practical Kabbalah,” that is, Jewish magic, probably dating back to the 6th century C.E.

Legendarily, this symbol is linked to “the Seal of Solomon,” the magical signet ring used by King Solomon to control demons and spirits. Solomon’s Seal had a pentagram (i.e. a five-pointed star) engraved on it, which also was used as a talisman according to researchers, although the name does not indicate the Jewish or Semitic origin of the sign. (Solomon’s Seal, last accessed September 13, 2011)

When Theodor Herzl, the founder of Zionism, looked for a symbol for the new movement, he chose the Star of David because it was so well-known; and also because it had at the time no religious associations.

In the course of time, it found its way to the center of the flag of the Jewish state of Israel and has become indicative of Jewish national resurgence.

The Crescent and Star

The crescent and star sign has nothing to do with Islam, although it is true that a fewMuslim countries—mostly non-Arab—have it on their flags.

It should be emphasized that the twin sources of Islam—the Quran and the Sunnah—do not mention such a symbol.

Since the Ottoman times, there has been the public perception that the star and crescent is a symbol of Islam and Muslims, and so it came to be used in decorative arts and Saracen architecture, jewelry, and so on.

As a matter of fact, Islamic scholars do not approve of the use of the crescent moon and star or any such figure as a “symbol” of Islam. This is because Islam has never adopted any symbol, and so there is no sense in Muslims adopting any such sign or emblem.

The real question is whether the Prophet allowed its use; and the answer is emphatically, no.

Remember that the first thing the Prophet did on re-entering Makkah after the Hijrah (the Prophet’s migration to Madinah), was to break all the idols in the Kaabah, including that of Hubal, who has been called a moon god. Indeed, we have no evidence to say that Hubal was a moon god either.

Islam, as taught by Prophet Muhammad, has been consistently and strongly opposed to the use of all sorts of idols, icons, and symbols that may lead the believers away from the worship of the One and Only God.

In fact, the crescent and star sign pre-dates Islam by thousands of years. Information on the origins of the symbol is difficult to ascertain.

The Crescent Before Islam

Most sources agree that these ancient celestial symbols were in use by the peoples of Central Asia and Siberia in their worship of sun, moon, and other celestial gods. There are also reports that the crescent moon and star were used to represent the Greek goddess, Diana.

The city of Byzantium (later known as Constantinople and Istanbul) adopted the crescent moon symbol. According to some reports, they chose it in honor of the goddess Diana.

Others indicate that it dates back to a battle in which the Romans defeated the Goths on the first day of a lunar month. In any event, the crescent moon was featured on the city’s flag even before the birth of Christ.

During the time of the Prophet Muhammad, Islamic armies and caravans flew simple solid-colored flags (generally black, green, or white) for identification purposes.

The flag of the Prophet was a black-and-white one inscribed with “Nasrun min Allah,” (meaning, “victory from God”).

It was not until the Ottoman Empire that the crescent moon and star became affiliated with the Muslim world. When the Turks conquered Constantinople (Istanbul) in 1453, they adopted the city’s existing flag and symbol.

But the faith of Islam has historically adopted no symbol, and many refuse to accept what is essentially an ancient pagan icon.

I hope this answers your question. Please keep in touch.