The Arabic word salaat (commonly translated prayer) literally means supplication. It is the connection a Muslim establishes with his Lord and Creator and comprises the loftiest manifestations of total submissiveness to Allah, turning to Him and seeking His assistance and support. When a Muslim stands in prayer before his Lord, invokes and remembers Him, his mind becomes serene. He realises his true and deep sense of nothingness, the worthlessness and transitory nature of this life, and recognises the greatness of his Lord and the immense mercy He has shown him. This prayer then prompts him to adhere to the principles of the divine law and to shun injustice, indecency and wrongdoing, as the Qur’an states, “The prayer restrains from shameful and unjust deeds.” (Soorat Al-‛Ankaboot,29:45)

Position and Virtues of Salaat in Islam

The prayer (salaat) is undeniably the greatest and most exalted act of worship. It is an act of worship which engages not only the body but also the heart, the mind and the tongue. Its immeasurable significance can be perceived in a number of aspects including the following:

It Occupies theLoftiest Position in Islam

It Has Numerous Virtues

Allah ﷻ commands the believers to observe the prayers under all circumstances, even in times of war and disasters. . 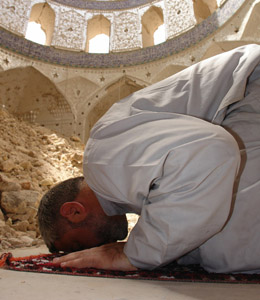 Textual evidence from the Qur’an and the Prophet’s traditions attest to the numerous virtues of the prayer. The following are some of them:

The sweetest moments a believer experiences is during the prayer, for when he engages in making humble and devout supplication to his Lord, he experiences peace and tranquillity in His presence. Indeed, it was the greatest joy for the prophet ﷺ who once observed, “The prayer is the source of my greatest joy.” (Sunan An-Nasaa’ee: 3940) He would even ask Bilaal t, his caller to the prayer, to call the prayer so he would experience spiritual peace and tranquillity. “Call [the people] to prayer, Bilaal,” he would say to him. “Let us be comforted by it.” (Sunan Abu Daawood: 4985) Also, whenever something distressed him, he would turn to prayer. (Sunan Abu Daawood: 1319)

For Whom Is It Obligatory?

It is obligatoryfor every adult, sane and responsible Muslim, male or female to offer the prayer. However, menstruating women or women in their post-natal bleeding are exempt from offering the prayers and are not required to make up for the prayers they have missed after their bleeding ceases and they have purified themselves

Maturity or puberty can be determined by the following indicators: