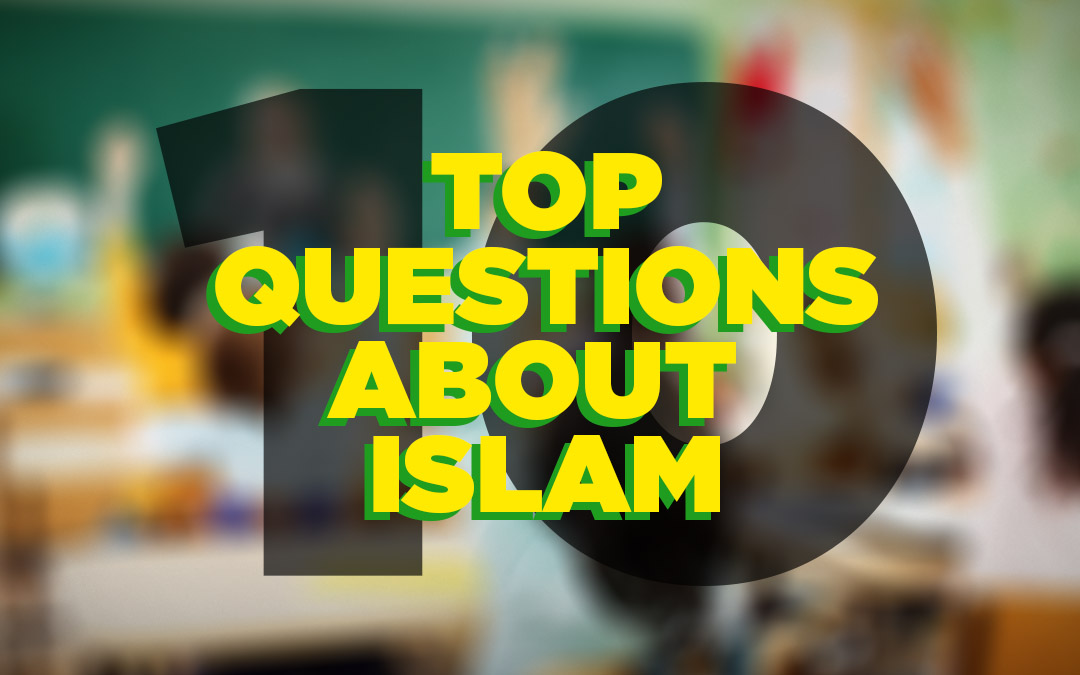 Below are the top 10 questions people ask about Islam:

1. Do Muslims worship Muhammad, peace be upon him (pbuh)?

2. What do Muslims think of Jesus? (pbuh)

Muslims think highly of Jesus (pbuh) and his worthy mother, Mary. The Quran tells us that Jesus was born of a miraculous birth without a father. “Lo! The likeness of Jesus with Allah is the likeness of Adam. He created him of dust, and then He said unto him: Be and he is” (Quran 3.59). He was given many miracles as a prophet. These include speaking soon after his birth in defense of his mother’s piety. God’s other gifts to him included healing the blind and the sick, reviving the dead, making a bird out of clay and most importantly, the message he was carrying. These miracles were given to him by God to establish him as a prophet. According to the Quran, he was not crucified but was raised into Heaven. (Quran, Chapter Maryam)

3. What is the purpose of worship in Islam?

The purpose of worship in Islam is to be God conscious. Thus the worship, whether it is prayer, fasting, or charity, is a means to achieve God consciousness so that when one becomes conscious of God, in thought and in action, he is in a better position to receive His bounties both in this world and the hereafter.

4. Do Muslims believe in the hereafter?

God is Just and manifest His justice, He established the system of accountability. Those who do good will be rewarded and those who do wrong will be punished accordingly. Thus, He created Heaven and Hell and there are admission criteria for both. Muslims believe that the present life is a temporary one. It is a test and if we pass the test, we will be given a life of permanent pleasure in the company of good people in Heaven.

5. What is the dress code for Muslims?

Islam emphasizes modesty. No person should be perceived as a sex object. There are certain guidelines both for men and women that their dress should neither be too thin nor too tight to reveal body forms. For men, they must at least cover the area from the knee to navel and for women, their dress should cover all areas except the hands and face. The veil is not essential.

6. What are the dietary prohibitions in Islam?

Muslims are told in the Quran not to eat pork or pork products, meat of the animals who died before being slaughtered or the carnivorous animals (as they eat dead animals), nor drink blood or intoxicants such as wine or use any illicit drugs.

7. Was Islam spread by the sword?

According to the Quran, “There is no compulsion in religion” (2:256), thus, no one can be forced to become a Muslim. While it is true that in many places where Muslim armies went to liberate people or the land, they did carry the sword as that was the weapon used at that time. However, Islam did not spread by the sword because in many places where there are Muslims now, in the Far East like Indonesia, in China, and many parts of Africa, there are no records of any Muslim armies going there. To say that Islam was spread by the sword would be to say that Christianity was spread by guns, F-16’s and atomic bombs, etc., which is not true. Christianity spread by the missionary works of Christians. Ten-percent of all Arabs are Christians. The “Sword of Islam” could not convert all the non-Muslim minorities in Muslim countries. In India, where Muslims ruled for 700 years, they are still a minority. In the U.S.A., Islam is the fastest growing religion and has 6 million followers without any sword around.

No, polygamy in Islam is a permission not an injunction. Historically, all the prophets except Jesus, who was not married, had more than one wife. For Muslim men to have more than one wife is a permission which is given to them in the Quran, not to satisfy lust, but for the welfare of the widows and the orphans of the wars. In the pre-Islamic period, men used to have many wives. One person had 11 wives and when he became Muslim, he asked the Prophet Muhammad (pbuh), “What should I do with so many wives?” and he said, “Divorce all except the four.” The Quran says, “you can marry 2 or 3 and up to 4 women if you can be equally just with each of them” (4:3). Since it is very difficult to be equally just with all wives, in practice, most of the Muslim men do not have more than one wife. Prophet Muhammad (pbuh) himself from age 24 to 50 was married to only one woman, Khadija. In the western society, some men who have one wife have many extramarital affairs. Thus, a survey was published in “U.S.A. Today” (April 4, 1988 Section D) which asked 4,700 mistresses what they would like their status to be. They said that “they preferred being a second wife rather than the ‘other woman’ because they did not have the legal rights, nor did they have the financial equality of the legally married wives, and it appeared that they were being used by these men.”

No. On the contrary, Islam elevated the status of women 1,400 years ago by giving them the right to divorce, the right to have financial independence and support and the right to be identified as dignified women (Hijab) when in the rest of the world, including Europe, women had no such rights. Women are equal to men in all acts of piety (Quran 33:32). Islam allows women to keep their maiden name after marriage, their earned money and spend it as they wish, and ask men to be their protector as women on the street can be molested. Prophet Muhammad (pbuh) told Muslim men, “the best among you is the one who is best to his family.” Not Islam, but some Muslim men, do oppress women today. This is because of their cultural habits or their ignorance about their religion. Female Genital Mutilations has nothing to do with Islam. It is a pre Islamic African Custom, practiced by non Muslims including coptic Christians as well.

10. How should Muslims treat Jews and Christians?

Muslims are told to treat them with respect and justice and do not fight with them unless they initiate hostilities or ridicule their faith. The Muslims ultimate hope is that they all will join them in worshipping one God and submit to His will.

“Say (O Muhammad): O people of the Book (Jews and Christians) come to an agreement between us and you, that we shall worship none but Allah, and that we shall take no partners with Him, and none of us shall take others for Lords beside Allah. And if they turn away, then say: Bear witness that we are those who have surrendered (unto Him).” (Quran 3:64)

What about Hindus, Bahai, Buddhists and members of other religions?
They should also be treated with love, respect, and understanding to make them recipients of Invitations to Islam.“Allaah does not forbid you to deal justly and kindly with those who fought not against you on account of religion nor drove you out of your homes. Verily, Allaah loves those who deal with equity” [al-Mumtahanah 60:8].

They should also be treated with justice and understanding so as to incline their hearts towards the message of Islam.