What are the Benefits of Monotheism/Tawheed? – Ask A Muslim Skip to content 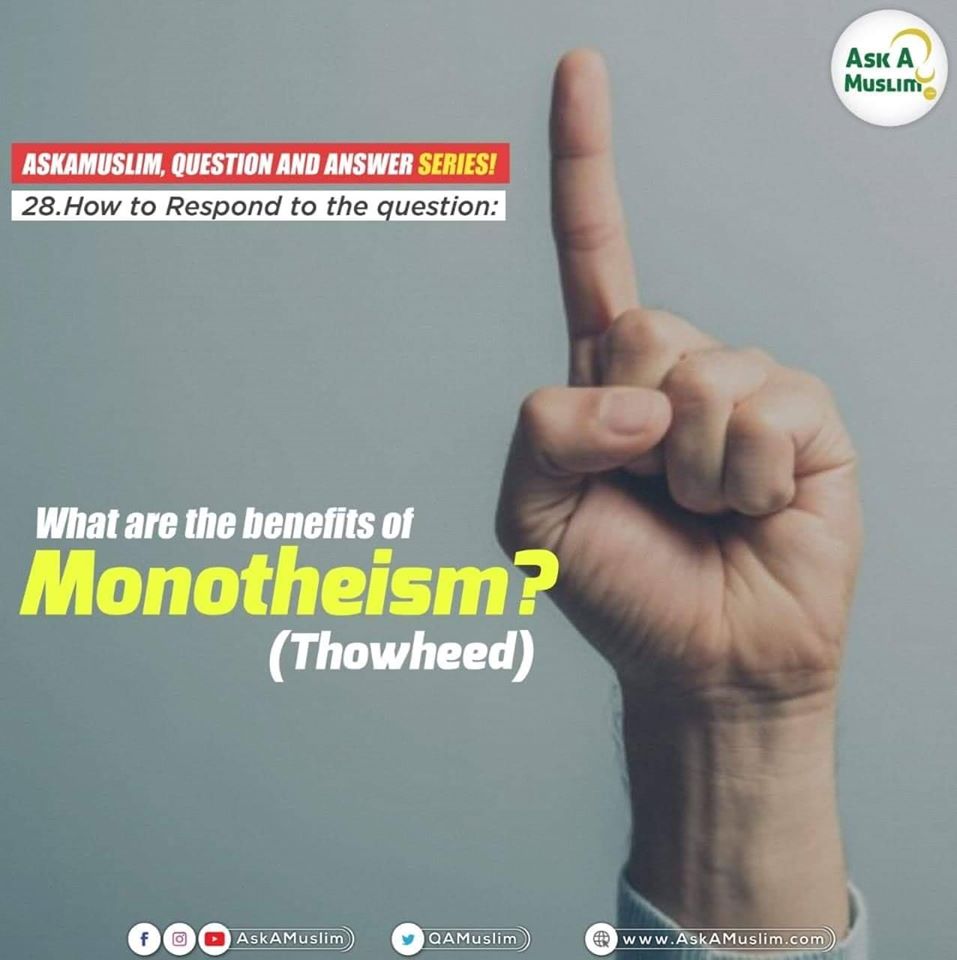 🔊God is the only worshipped because He is attributed with Complete Godship and Lordship Attributes
God is dominant in universe.

🔊Muhammad Rasulu Allah👇
means I follow only him, nobody else and my true love for him is proved through my following and obeying him
-No true love without obedience otherwise it’s fake
Allah’s Messenger (ﷺ) said, “By Him in Whose Hands my life is, none of you will have faith till he loves me more than his father and his children.
[Bukhari: 14]

7. Allah created creation, paradise and sent down books for it
[Ibn Kathir 3/175]

8. It is the covenant Allah promised his creation
{Ibn Kathir 3/441}

9. It wipes out sins
[Ahmed, Bukhari, Albani and Tirmidi]

13. Fills what’s within the heavens and earth with hasanat (good deeds)
[Albani in Mishkat El Masabih Authentic on the condition of Muslim 1/281]

17. Allah answers supplications after one says it along with sending salutations Muhammad peace be upon him.

18. After one does Wudue and says it angels put it in an envelop and stamp it.
Will be given to you as surprising gifts in paradise
[Tirmidi]

21. The most loved word to Allah and Prophet Muhammad peace be upon him
[Muslim]

22. The first thing Allah wrote in the preserved slate/tablet (written book of all destinations)

23. If one says it after Fajr Prayer, he is considered as the best worshipper

Allah’s Messenger (ﷺ) said,” Whoever says: “La ilaha illal-lah wahdahu la sharika lahu, lahu-l-mulk wa lahul- hamd wa huwa ‘ala kulli shai’in qadir,” one hundred times will get the same reward as given for manumitting ten slaves; and one hundred good deeds will be written in his accounts, and one hundred sins will be deducted from his accounts, and it (his saying) will be a shield for him from Satan on that day till night, and nobody will be able to do a better deed except the one who does more than he.”
Sahih al-Bukhari 6403

24. It consists of the Greatest Name of Allah
{Albani}

25. As long as it is invoked, the universe will still exist
[Muslim with the explanation of Nawawi
1/178 – Book of Vanishing of Faith in the Last Time]

28. Saves its owner from torment of hellfire ▪
Allah won’t punish he who says and says/ applies it
{Ibn Majah In Mishkat El Masabih 2/ 2378}

29. It’s the motto of believers in their graves
[Ibn Rajab in his book Kalimatul Ikhlass (Word of Faith: 56]

32. The firmest handhold in the Ayah: {2:56}
“whoever disbelieves in Taghut and believes in Allah has grasped the most trustworthy handhold with no break in it. And Allah is Hearing and Knowing.”

👉Taghut: everything worshipped apart from Allah

34. Saves from hellfire
[Bukhari and Muslim]

38. The word said by Jonah in the belly of the Whale
{El Fath 11/6346}
21:87) And [mention] the man of the fish, when he went off in anger and thought that We would not decree [anything] upon him. And he called out within the darknesses, “There is no deity except You; exalted are You. Indeed, I have been of the wrongdoers.”

40. It is the best Name of Allah which if one prays to Allah with It his dua is certainly accepted on condition one eats halal food
And Iman is raised by it
[Sahih El Jamia 1/980]

In a nutshell, i would say it’s the secret of this universe Because Islam is based on It. Allah created us for this word as in Tafsir El Baghawi 7/380

NB: translated and relied on the following reference: