God created Adam in his image?! – Ask A Muslim Skip to content 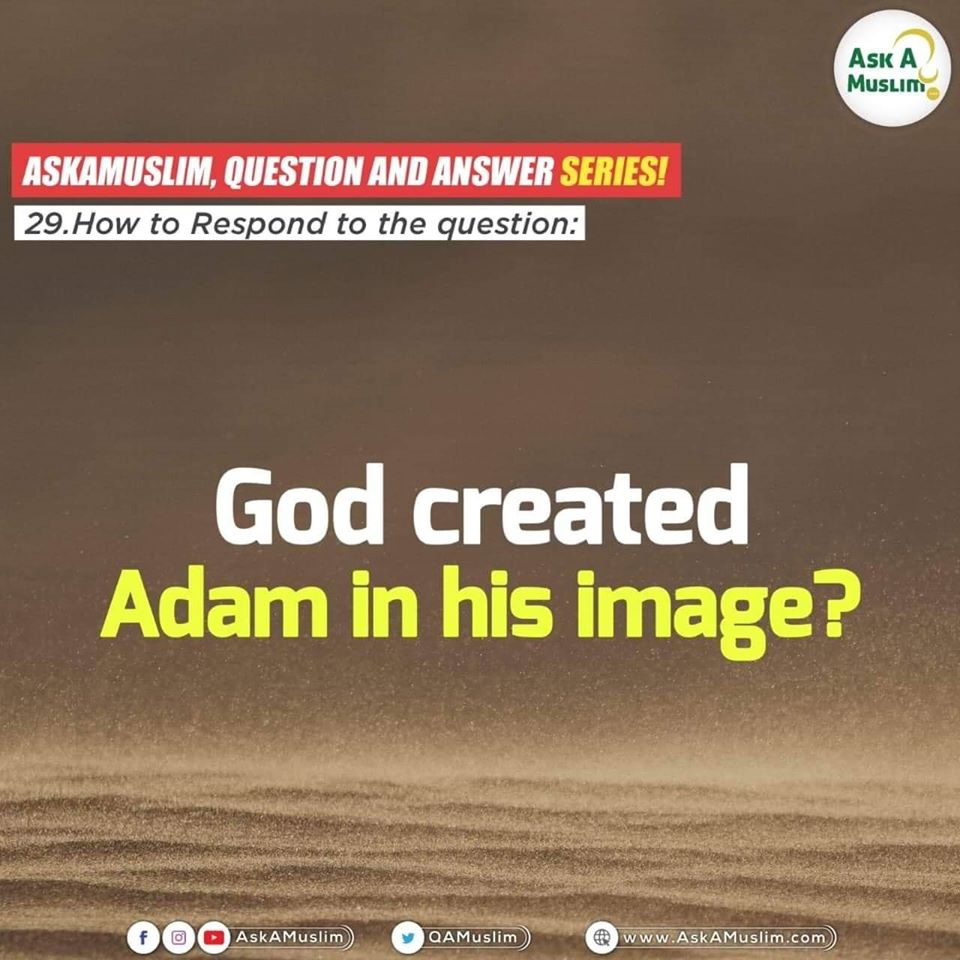 Yes this is true. Allah the Almighty created Adam in his image. But note here one thing. God created Adam in 👉🏼‘’his’’ not ‘’His’’ image since you capitalised the ‘H’ this means that you wonna say that we assimilate Allah to Adam. This is absolutely incorrect because Islam is the only faith on earth that doesn’t confine God’s attributes to a place or time. We don’t assimilate

Add to this that the meaning which the overall scholars agree upon is that God created Adam in his : meaning in Adam’s shape but not God’s. Because the surat of monotheism negates so too and says Nothing is comparable to Him.

Yet, there are other hadeeths (Prophet’s sayings) confirming the above meaning litteraly but without resemblance of God to humans.

You may say :
“well but the meaning sounds like Adam has face and God has a Face too”

We will respond yes absolutely in Hadeeth we are told that God has Face Sight Hearing, Chin, Leg ..etc but God is beyond measure and unconceivable thus has not organs like us. Because he says in the Noble Quran that (( Nothing is like Him. And He is All Hearing All Seeing))

Shaykh Ibn Baaz (may Allaah have mercy on him) was asked: There is a Hadeeth narrated from the Prophet (peace and blessings of Allaah be upon him) in which he forbids saying “May Allaah deform your face”, and says that Allaah created Adam in his image. What is the correct belief with regard to this hadeeth?

This hadeeth is proven from the Prophet (peace and blessings of Allaah be upon him), in which he said: “If any one of you strikes (another), let him avoid the face, for Allaah created Adam in his image.” According to another version: “In the image of the Most Merciful.” This does not imply resemblance or likeness.
👇🏻
It means in the image Allah gave him or in the image that resembles us humans not God
Because Allah has no Image known to us

What is meant, according to the scholars, is that Allaah created Adam with the ability to hear and see, and to speak when he wants. These are also attributes of Allaah, for He is All-Hearing, All-Seeing, and He speaks when He wants, and He has a Face, may He be glorified and exalted.

*But it does not mean that there is any resemblance or likeness.
*Rather the image of Allaah is different from that of created beings.
*What is meant is that He is All-Hearing, All-Seeing, and He speaks when He wants, and He created Adam also able to hear and see, with a face and hands and feet.

So it is not permissible to strike the face or say “May Allaah deform your face”.
●Ref: Majmoo’ Fataawa al-Shaykh, 4/226

Another thing that will help to explain the meaning of this Hadeeth is the words of the Prophet (peace and blessings of Allaah be upon him):

What the Prophet (peace and blessings of Allaah be upon him) meant here is that the first group will be in human form, but because of their purity, beauty and brightness of face they will look like the moon, so they are likened to the moon, but without resembling it. So just because a thing is said to be in the image of a thing it does not mean that it is like it in all aspects.

The Prophet’s words, “Adam was created in his image”

There is no similarity, and is not exactly the same.

Similarly the first group to enter Paradise are likened to the moon, but they are not exactly the same.

This confirms the view of Ahl al-Sunnah wa’l-Jamaa’ah, who say that none of the attributes of Allaah can be likened to the attributes of created beings, without distorting or misinterpreting, or discussing how or likening Him to His creation.

So always remember
He is not as he
Plus Creator and creation have face eyes etc but this is not that.

👉🏼Therefore Adam was created in his own image not God’s