What is the saved group in Islam? Are there any sects to follow in Islam? – Ask A Muslim Skip to content 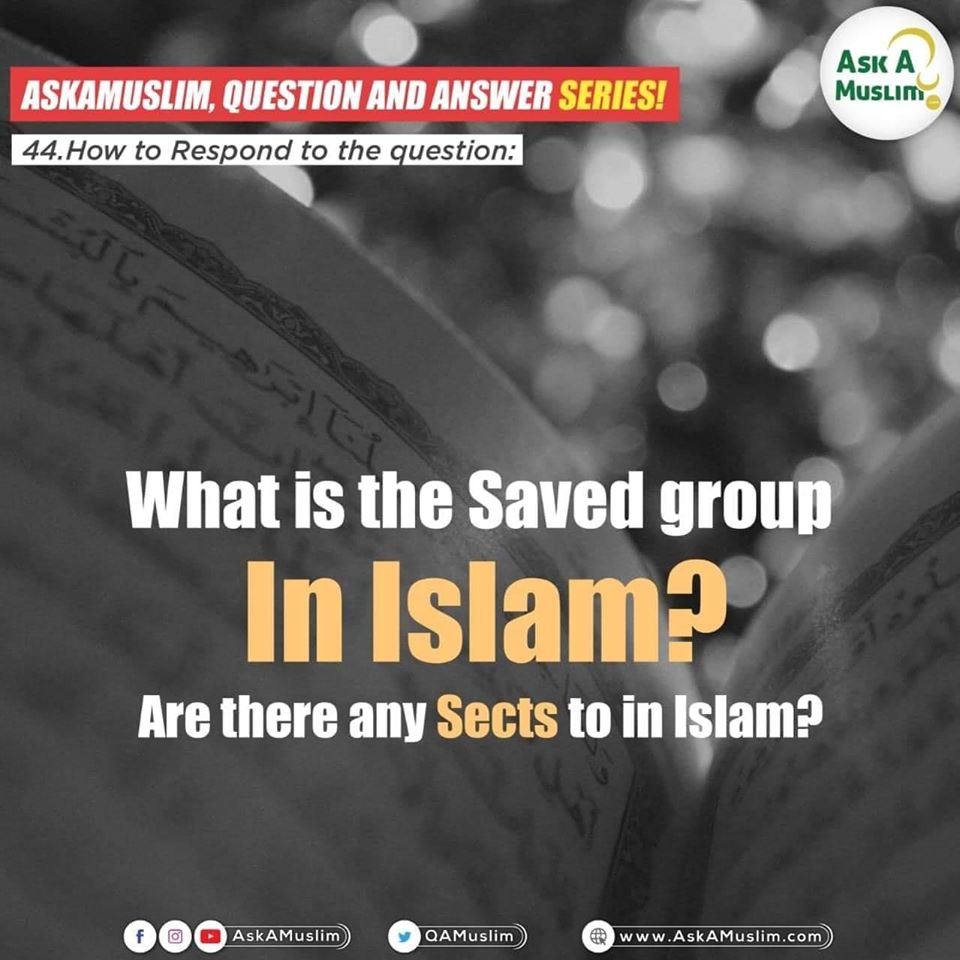 What is the saved group in Islam?
Are there any sects to follow in Islam?

The answer is that Sunnah and Consensus is no doubt the best and saved group. 👇👇

Yes Unity is required in Islam but monotheism comes before it

Allah Exalted be He says:
(3:103) And hold firmly to the rope of Allah all together and do not become divided. And remember the favor of Allah upon you – when you were enemies and He brought your hearts together and you became, by His favor, brothers. And you were on the edge of a pit of the Fire, and He saved you from it. Thus does Allah make clear to you His verses that you may be guided

Yet Prophet Muhammad came with both Quran and Sunnah

The word Sunni is mentioned in Quran

(On the Day when some faces will become white and some faces will become black;) ﴿3:106﴾ on the Day of Resurrection. This is when the faces of followers of the Sunnah and the Jama`ah will radiate with whiteness, and the faces of followers of Bid`ah (innovation) and division will be darkened, as has been reported from Ibn `Abbas.
— — — — —
One should follow the way of the majority of scholars, those whom all the people testify are trustworthy and religiously-committed, and he should follow the way of the earlier scholars among the Sahaabah, Taabi’een and the four Imams and other scholars, and he should beware of every sect that differs from the main body of Muslims (jamaa’ah) by following innovation (bid’ah).
——–

Differences in this Ummah are sure to happen

The Prophet (peace and blessings of Allaah be upon him) said: “Whoever among you lives after I am gone will see a great deal of dissent.”
▪︎Narrated by Abu Dawood (4067); classed as saheeh by al-Albaani in Saheeh Abi Dawood.

This Ummah will be separated into 73 sects
And this ummah will split into seventy-three: seventy-two in Hell and one in Paradise, and that is the jamaa’ah (main body of Muslims).”

They said: Who are they, O Messenger of Allaah? He said:
“(Those who follow) that which I and my companions follow.”

▪︎This Hadith is classed as hasan by al-Albaani in Saheeh al-Tirmidhi.

They are the majority of scholars, those whom all the people testify are trustworthy and religiously-committed, and we should follow the way of the earlier scholars among the Sahaabah, Taabi’een and the four Imams and other scholars, and he should beware of every sect that differs from the main body of Muslims (jamaa’ah) by following innovation (bid’ah).

Shaykh al-Islam Ibn Taymiyah (may Allaah have mercy on him) said:

It is not permissible for anyone to imagine after this that any other sects are the saved group.

Rather these are innovated groups which only follow invented ideas, that are denounced by the scholars and the majority of Muslims, who feel repulsion in their hearts towards them. Their ideas were never believed in for a day by Abu Bakr, ‘Umar, ‘Uthmaan or ‘Ali (may Allaah be pleased with them), or by Imam Abu Haneefah, Maalik, al-Shaafa’i or Ahmad ibn Hanbal.

Hence the saved group is described as Ahl al-Sunnah wa’l-Jamaa’ah, and they are the greater majority and the vast multitude. As for the other groups, they are followers of weird ideas, division, innovation and whims and desires, and none of these groups reached anywhere close to the size of the saved group, let alone being equal to them, rather some of these groups are very small in number. The sign of these groups is that they go against the Qur’aan, Sunnah and scholarly consensus. {The one who follows the Qur’aan, Sunnah and scholarly consensus is one of Ahl al-Sunnah wa’l-Jamaa’ah.
▪︎[Majmoo’ al-Fataawa (3/346).]

The scholars of Ahl al-Sunnah wa’l-Jamaa’ah have stated in their books that the other sects are among the misguided and doomed innovated groups, and that they deserve to enter Hell because of the reprehensible ideas and grave innovations that they have introduced into the religion of Allaah. But in most cases they are not regarded as kaafirs, rather they are regarded as Muslim sects.

Prophet (peace and blessings of Allaah be upon him) described the saved group as the jamaa’ah, i.e., the consensus of the Muslim scholars. In other reports he also described them as “the vast multitude”, as in the hadeeth of Abu Umaamah and others which is ▪︎recorded by Ibn Abi ‘Aasim in al-Sunnah (1/34) and al-Tabaraani in al-Mu’jam al-Kabeer (8/321), with an isnaad that is hasan li ghayrihi (hasan because of corroborating evidence).

Abu Dawud also reported from al-’Irbaad ibn Saariyah, may Allaah be pleased with him, that “the Messenger of Allaah (peace be upon him) led us in prayer one day, then he turned to us and exhorted us strongly . . . (he said), ‘Pay attention to my sunnah (way) and the way of the Rightly-guided Khaleefahs after me, adhere to it and hold fast to it.’”

“And whoever contradicts and opposes the Messenger (Muhammad (blessings and peace of Allah be upon him)) after the right path has been shown clearly to him, and follows other than the believers way. We shall keep him in the path he has chosen, and burn him in Hell – what an evil destination”

⚘🍒🍎🍏🏳◼“I urge you to adhere to what you know of my Sunnah and the path of the Rightly-Guided Caliphs, and cling stubbornly to it..”

🏳◼“I have left two matters with you. As long as you hold to them, you will not go the wrong way. They are the Book of Allah and the Sunna of His Prophet.”

The hadeeth of 37 sects is authentic👇

Narrated by Abu Dawood (4597) and others; classed as saheeh by al-Haakim (1/128), who said: it is an important hadeeth that represents a basic principle. It was classed as hasan by Ibn Hajar in Takhreej al-Kashshaaf (63). It was classed as saheeh by Ibn Taymiyah in Majmoo’ al-Fataawa (3/345), al-Shaatibi in al-I’tisaam(1/430), and al-‘Iraaqi in Takhreej al-Ihya’ (9/133). It is mentioned frequently and often quoted as evidence by the scholars in the books of Sunnah, and it was narrated from a number of the Sahaabah via many isnaads, most of the soundest of which specify the number of sects as being seventy-three.

Therefore Sunnah and Jamaah is the saved group

And drop all other names aside from it… .