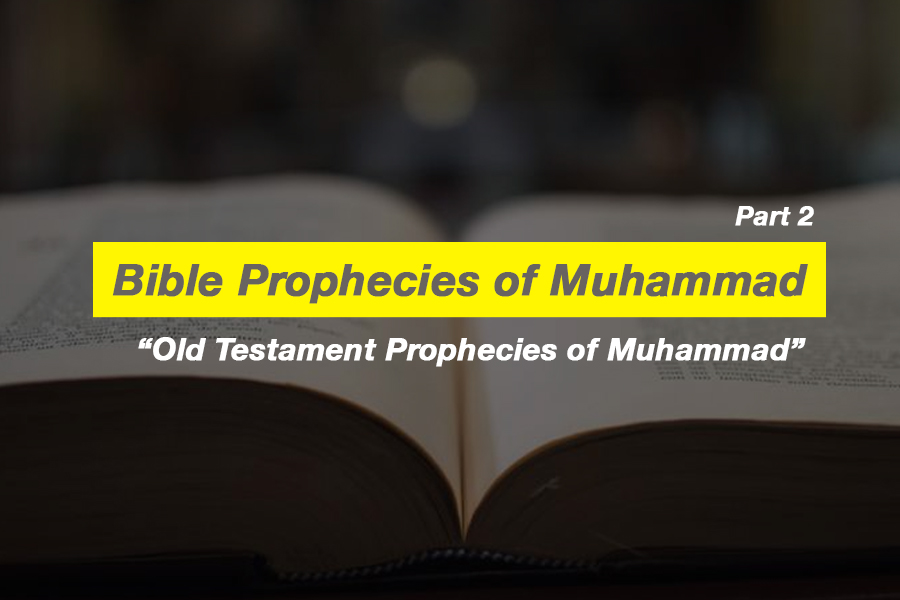 5.      Jesus describes the function of the other Parakletos:

God says in the Quran of Muhammad:

“O mankind!  The Messenger has now come unto you with the truth from your Lord: believe, then, for your own good!…” (Quran 4:170)

“…who shall become known as the Christ Jesus, son of Mary, of great honor in this world and in the life to come, and [shall be] of those who are drawn near unto God.” (Quran 3:45)

“Whoever testifies that none deserves worship except God, who has no partner, and that Muhammad is His servant and Messenger, and that Jesus is the servant of God, His Messenger, and His Word which He bestowed in Mary, and a spirit created from Him, and that Paradise is true, and that Hell is true, God will admit him into Paradise, according to his deeds.” (Saheeh Al-Bukhari, Saheeh Muslim)

John 16:8 “he will convince the world of its sin, and of God’s righteousness, and of the coming judgment.”

“Indeed, they have disbelieved who say, ‘God is the Christ, son of Mary’ – seeing that the Christ [himself] said, ‘O Children of Israel!  Worship God [alone], who is my Lord as well as your Lord.’ ‘Indeed, whoever ascribes divinity to any being beside God, unto him will God deny paradise, and his goal shall be the fire: and there are not for the wrongdoers any helpers!’” (Quran 5:72)

John 16:13 “he shall not speak of himself; but whatsoever he shall hear, [that] shall he speak.”

The Quran says of Muhammad:

“Neither does he speak out of his own desire: that [which he conveys to you] is but [a divine] inspiration with which he is being inspired.” (Quran 53:3-4)

John 14:26 “and bring all things to your remembrance, whatsoever I have said unto you.”

The words of the Quran:

…reminds people of the first and greatest command of Jesus they have forgotten:

Hudhaifa, a disciple of Prophet Muhammad, tells us:

“The Prophet once delivered a speech in front of us wherein he left nothing but mentioned everything that would happen till the Hour (of Judgment).” (Saheeh Al-Bukhari)

…meaning his original teachings will remain forever.  Muhammad was God’s last prophet to humanity.[1]  His teachings are perfectly preserved.  He lives in the hearts and minds of his adoring followers who worship God in his exact imitation.  No man, including Jesus or Muhammad, has an eternal life on earth.  Parakletos is not an exception either.  This cannot be an allusion to the Holy Ghost, for present day creed of the Holy Ghost did not exist until the Council of Chalcedon, in 451 CE, four and half centuries after Jesus.

Many people in the world today do not know Muhammad.

Muhammad will be the advocate of humanity at large and of sinful believers on Judgment Day:

People will look for those who can intercede on their behalf to God to reduce the distress and suffering on Day of Judgment.  Adam, Noah, Abraham, Moses, and Jesus will excuse themselves.

Then they will come to our Prophet and he will say, “I am the one who is able.”  So he will intercede for the people in the Great Plain of Gathering, so judgment may be passed.  This is the ‘Station of Praise’ God promises Him in the Quran:

“…It may be that your Lord will raise you to Station of Praise (the honor of intercession on the Day of Resurrection)” (Quran 17:79)[2]

“My intercession will be for those of my nation who committed major sins.” (Al-Tirmidhi)

“I shall be the first intercessor in Paradise.” (Saheeh Muslim)

Some Muslim scholars suggest what Jesus actually said in Aramaic represents more closely the Greek word periklytos which means the ‘admired one.’ In Arabic the word ‘Muhammad’ means the ‘praiseworthy, admired one.’ In other words, periklytos is “Muhammad” in Greek.  We have two strong reasons in its support.  First, due to several documented cases of similar word substitution in the Bible, it is quite possible that both words were contained in the original text but were dropped by a copyist because of the ancient custom of writing words closely packed, with no spaces in between.  In such a case the original reading would have been, “and He will give you another comforter (parakletos), the admirable one (periklytos).”  Second, we have the reliable testimony of at least four Muslim authorities from different eras who ascribed ‘admired, praised one’ as a possible meaning of the Greek or Syriac word to Christians scholars.[3]

The following are some who attest that the Paraclete is indeed an allusion to Muhammad, may the mercy and blessings of God be upon him:

Anselm Turmeda (1352/55-1425 CE), a priest and Christian scholar, was a witness to the prophecy.  After accepting Islam he wrote a book, “Tuhfat al-arib fi al-radd ‘ala Ahl al-Salib.”

Abdul-Ahad Dawud, the former Rev. David Abdu Benjamin Keldani, BD, a Roman Catholic priest of the Uniate-Chaldean sect.[4]  After accepting Islam, he wrote the book, ‘Muhammad in the Bible.’  He writes in this book:

“There is not the slightest doubt that by “Periqlyte,” Prophet Muhammad, i.e. Ahmad, is intended.”

A synopsis of the life of Muhammad Asad has already been given above.  Commenting on the verse:

“…an apostle who shall come after me, whose name shall be Ahmad” (Quran 61:6)

…where Jesus predicts the coming of Muhammad, Asad explains that the word Parakletos:

“…is almost certainly a corruption of Periklytos (‘the Much-Praised’), an exact Greek translation of the Aramaic term or name Mawhamana.  (It is to be borne in mind that Aramaic was the language used in Palestine at the time of, and for some centuries after, Jesus and was thus undoubtedly the language in which the original – now lost – texts of the Gospels were composed.) In view of the phonetic closeness of Periklytos and Parakletos it is easy to understand how the translator – or, more probably, a later scribe – confused these two expressions.  It is significant that both the Aramaic Mawhamana and the Greek Periklytos have the same meaning as the two names of the Last Prophet, Muhammad and Ahmad, both of which are derived from the Hebrew verb hamida (‘he praised’) and the Hebrew noun hamd (‘praise’).”