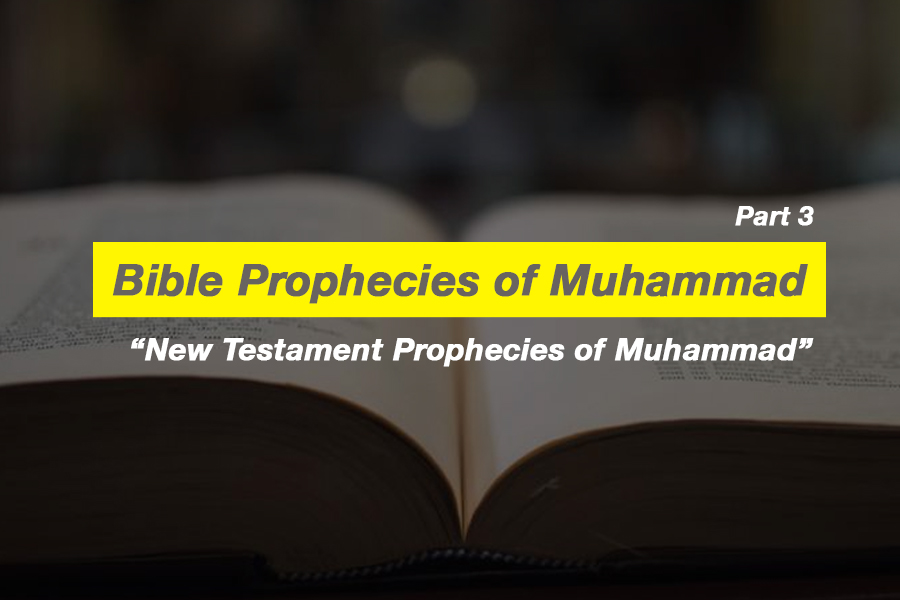 John 14:16  “And I will pray the Father, and he shall give you another Comforter, that he may abide with you for ever.” (American Standard Version)

In this verse, Jesus promises that another “Comforter” will appear, and thus, we must discuss some issues concerning this “Comforter.”

The Greek word paravklhtoß, ho parakletos, has been translated as ‘Comforter.’  Parakletos more precisely means ‘one who pleads another’s cause, an intercessor.’[1]  The ho parakletos is a person in the Greek language, not an incorporeal entity.  In the Greek language, every noun possesses gender; that is, it is masculine, feminine or neutral.  In the Gospel of John, Chapters 14, 15 and 16 the ho parakletos is actually a person.  All pronouns in Greek must agree in gender with the word to which they refer and the pronoun “he” is used when referring to the parakletos.  The NT uses the word pneuma, which means “breath” or “spirit,” the Greek equivalent of ruah, the Hebrew word for “spirit” used in the OT.  Pneuma is a grammatically neutral word and is always represented by the pronoun “it.”

All present day Bibles are compiled from “ancient manuscripts,” the oldest dating back to the fourth century C.E.  No two ancient manuscripts are identical.[2]  All Bibles today are produced by combining manuscripts with no single definitive reference.  The Bible translators attempt to “choose” the correct version.  In other words, since they do not know which “ancient manuscript” is the correct one, they decide for us which “version” for a given verse to accept.  Take John 14:26 as an example.  John 14:26 is the only verse of the Bible which associates the Parakletos with the Holy Spirit.  But the “ancient manuscripts” are not in agreement that the “Parakletos” is the ‘Holy Spirit.’  For instance, the famous Codex Syriacus, written around the fifth century C.E., and discovered in 1812 on Mount Sinai, the text of 14:26 reads; “Paraclete, the Spirit”; and not “Paraclete, the Holy Spirit.”

Why is it important?  It is significant because in biblical language a “spirit,” simply means “a prophet.”

“Beloved, believe not every spirit, but try the spirits whether they are of God: because many false prophets are gone out into the world.”[3]

It is instructive to know that several biblical scholars considered parakletos to be an ‘independent salvific (having the power to save) figure,’ not the Holy Ghost.[4]

The question, then, is: was Jesus’ parakletos, Comforter, a ‘Holy Ghost’ or a person – a prophet – to come after him?  To answer the question, we must understand the description of ho parakletos and see if it fits a ghost or a human being.

When we continue reading beyond chapter 14:16 and chapter 16:7, we find that Jesus predicts the specific details of the arrival and identity of the parakletos.  Therefore, according to the context of John 14 & 16 we discover the following facts.

It is impossible that the Comforter be the “Holy Ghost” because the Holy Ghost was present long before Jesus and during his ministry.[5]

John 16:13 Jesus referred to the paraclete as ‘he’ and not ‘it’ seven times, no other verse in the Bible contains seven masculine pronouns.  Therefore, paraclete is a person, not a ghost.

“And if any man sin, we have an advocate (parakletos) with the Father, Jesus Christ the righteous.” (1 John 2:1)

Here we see that parakletos is a physical and human intercessor.

3.      The Divinity of Jesus a later innovation

Jesus was not accepted as divine until the Council of Nicea, 325 CE, but everyone, except Jews, agree he was a prophet of God, as indicated by the Bible:

Matthew 21:11 “…This is Jesus the prophet of Nazareth of Galilee.”

Luke 24:19 “…Jesus of Nazareth, which was a prophet mighty in deed and word before God and all the people.”

4.      Jesus prayed to God for another parakletos:

John 14:16 “And I will pray the Father, and he shall give you another parakletos.”