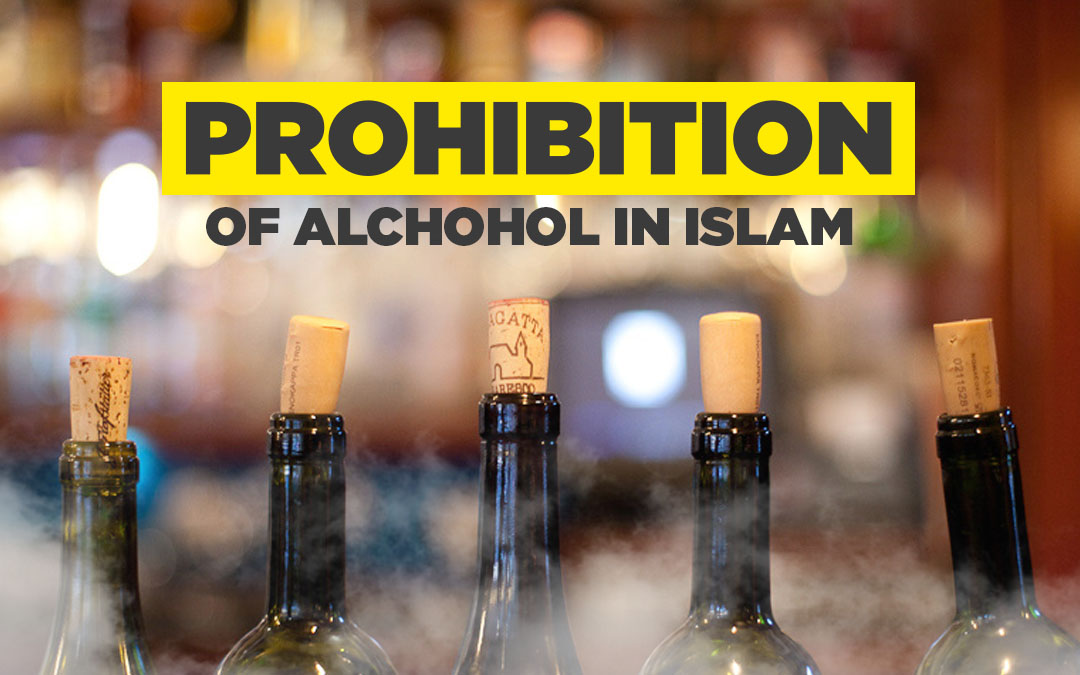 In the Holy Qur’an the word Khamr has been used for alcoholic drinks. During the days of the Holy Prophet Muhammad (peace be upon him) the sources of alcoholic beverages were grapes, dates, wheat, barley and honey. Although alcohol may be prepared nowadays from any other source, it is still considered to be forbidden as long as it intoxicates people. Islam emphasises the effects of alcohol on people and not the origin or form of alcohol.

“They question thee about strong drinks and games of chance. Say: In both is great sin, and (some) utility for men; but the sin of them is greater than their usefulness.”

There is a great sin in wine drinking and one of the things that Allah forbade is sins. The last portion of the verse tells us that there is greater harm in wine and gambling than the benefit. No sane man will approach or do anything that has a greater harm than benefit for him.

“O ye who believe! Draw not near unto prayer when ye are drunken, till ye know that which ye utter … “

There are some ignorant and misguided Muslims who try to argue on the basis of this verse that the Qur’an has not specifically prohibited Khamr. They tend to forget that it refers to the time before intoxicants were prohibited. Before the prohibition of intoxicants altogether was promulgated, it was at least unbecoming that people should come to prayers in a state of intoxication or in a dazed state of mind on account of drowsiness or some other cause. Islam regards prayers as a monologue between a Muslim and the Creator of the universe. So he is prohibited to approach this monologue while he is drunk. He must purify himself first before he approaches Salat. He must be pure in mind and body, therefore, he must be sober. He must be clean in clothes too.

Salat (prayer) is Islam’s most important act of worship. The Holy Prophet said : “Prayer is the pillar of Islam. The one who performs it has established his religion and the one who abandons it has ruined (his) religion.” That is why some of the leading Muslim jurists consider that person as murtad (renegade) who abandons his prayers altogether.

“O ye who believe ! Strong drinks and games of chance and idols and divining of arrows are only an infamy of Satan’s handiwork. Leave it aside in order that ye may succeed. Satan seeketh only to cast among you enmity and hatred by means of strong drink and games of chance, and turn you from remembrance of Allah and from (His) worship. So will ye not then abstain?”

We are told in the last revealed verses on intoxicants that drinks, gambling etc., are abomination of Satan’s handicraft. We must, therefore, be very careful about the instigations of our mortal enemy – Satan. That is why we are to rid ourselves of all abominable things.

Another point from these ayat is that Satan wants to excite enmity and hatred between us. We want to live happily and friendly and no hatred is to be aroused. So when the final stage of prohibition was revealed in the third year after the Battle of Uhud, it was only to be announced before the Muslims that liquor and drug were not to be taken by a Muslim. When the reciters of the revealed verse reached “will ye not then abstain?” all Muslims said, “We have really abstained, O Allah”. Hence they poured on the earth all the drinks that remained whether it was in a jar, mug or in anything else. They also spat out what was in their mouths.

The Messenger of Allah (may blessings and peace of Allah be upon him) ordered people to throw away all drinks that was in their possession. Soon after the revelation, some of the companions came back and told the Prophet that there was some drink that belonged to some orphans, what were they to do about this; spill it or leave it. He ordered the companions to throw away all drinks, no matter to whom they belonged.

Had it not been Haram (unlawful), the Prophet (peace be upon him) wouldn’t have ordered them to throw it away. Had he not, the Apostle of Allah (may blessings and peace of Allah be upon him), understood that alcohol was Haram, he wouldn’t have forbidden Muslims from drinking.

Had it not been unlawful, the Messenger of Allah wouldn’t have cursed it, as well as the brewer or winemaker, the drinker, the buyer, the server (waiter) and those present at the party. And the Prophet (peace be upon him) wouldn’t have ordered that the drinker was to be flogged.[1]

There is a very good collection of Ahadith (sayings of the Prophet) dealing with intoxicants. Some of these are given below:

The people who nowadays take medicines and tonics with high percentage of liquor either under medical advice or otherwise should ponder over the above Hadith and leave forthwith the use of haram tonics and syrups. Abu Darda reported that the Holy Prophet said, “Verily, Allah sent down ailment and cure (thereof). So he made a cure for every ailment. So seek cure but seek not cure by unlawful things.” [Abu Dawud]

From this authentic information, it is clear that alcohol beverages in all their kinds and forms are unlawful for Muslims to consume or deal with. This includes all types of wines, liquors, fermented beverages, pure alcohol and the like. Besides, there are some drugs which fall under the category of intoxicants. These are opium, bhang, qat (a grass-like type of plant used in Yemen). The Kenyans use a plant of the same species, called marungi marijuana (mostly used in USA).

All such intoxicants are prohibited by Islam since the evils of drug abuse are in many ways much worse than alcoholism. Addicting drugs which produce temporary feelings of euphoria and well-being like opium, morphine, pethadine, heroin, methedrine, benzedrine (“speed”) and barbituate abuse (“rockets”), hashish, charas, marijuana (cannabis or “grass”). L.S.D., mescaline and “angel-dust” create delusions and hallicinions and insanity (psychotic states) which may last for months and even years after the drug has been withdrawn. Alcoholism and drug abuse are responsible for many admissions into insane asylums and mental hospitals and may cause permanent psychosis and brain damage. Intoxicants and drug abuse force the victims to indulge in crime and addiction makes it impossible for the “user” to lead a normal life. Intoxicants ruin the “user’s” health and may lead to an early death.

The Muslims abstain from alcoholic drinks, intoxicating drugs and swine-flesh and such haram things because Almighty Allah has prohibited these in the Qur’an and Hadith. We abstain from these prohibited things because Almighty Allah has commanded us thus and to ward ourselves from His wrath and eternal punishments by indulging in the haram. Allah knows what is good for us spiritually and morally as well as physically. These are the primary reasons why we abstain from haram: all other reasons are of secondary importance though it is useful to mention them.

Alcohol is not only a great wastage of money but also causes ulcers, stomach cancer, neurological and digestive disorders and liver ailments. And the greatest cancer risk is faced by people who both smoke and drink. The twin-evils of liquor and gambling have ruined innumerable lives, shattered multitudes of homes, and caused more misery to mankind than all other vices put together.

The modern scientists, after carrying on a long research on alcohol, clearly say that alcohol is the mother of all evils. Drinking causes lowliness and extinguishes noble passions of mercy, sympathy and tenderness. The drunkard ventures to commit the most heinous offences of murder, rape and fornication, disgraces people and defies the law and canons of society. This is simply because an alcoholic falls into a fit of passion and loses his power of control and self-restraint. He makes desire is “god” to satisfy his sexual lust and other unlawful pursuits. This is extremely harmful for the elevation of soul because wine-drinking extinguishes the glow of faith. This point has been elaborated in a Hadith of the Prophet where he said: “A person at the time of drinking wine is not a believer.” [Bukhari]. In other words, a person who drinks wine is devoid even an iota of faith at the time of drinking.

According to the Shari’ah, it is the duty of the Islamic state to enforce prohibition. The punishment of a free person for drinking wine or other intoxicating liquor, is eighty stripes on the authority of all the companions. This is equal to punishment for baseless slandering. The flogging should he such as does not inflict wounds on the body beneath the skin. The Holy Prophet once said to the executioner: In inflicting the punishment, take care not to strike the face, the head or the privates.

Flogging should not be done by a cruel executioner but by scholars who are well versed in the Islamic Law so that they should award punishment according to the letter and spirit of the law.

Reasons for Prohibition of Alcohol in Islam

There are many reasons why alcoholic beverages have been prohibited in Islam. The following are among the reasons which Muslims believe in and are taken from Dr. Ahmad H. Sakr’s booklet on the subject:

For the above reasons, practising Muslims try their best to shun alcoholic beverages and those parties where alcohol is served, so as to please Allah Almighty.

And finally we seek refuge in Allah against wine and its sinister evils and against the worship of evil promptings and the Satan.

“Say: My Lord hath forbidden indecencies, such of them as are apparent and such as are within, and sin and wrongful oppression … “

Muslims in an Alien Society: The Prohibition of Alcohol in Islam published by Ikhwan Limited, Nairobi.