The First Pillar of Islam: The Muslim Profession of Faith – Ask A Muslim Skip to content 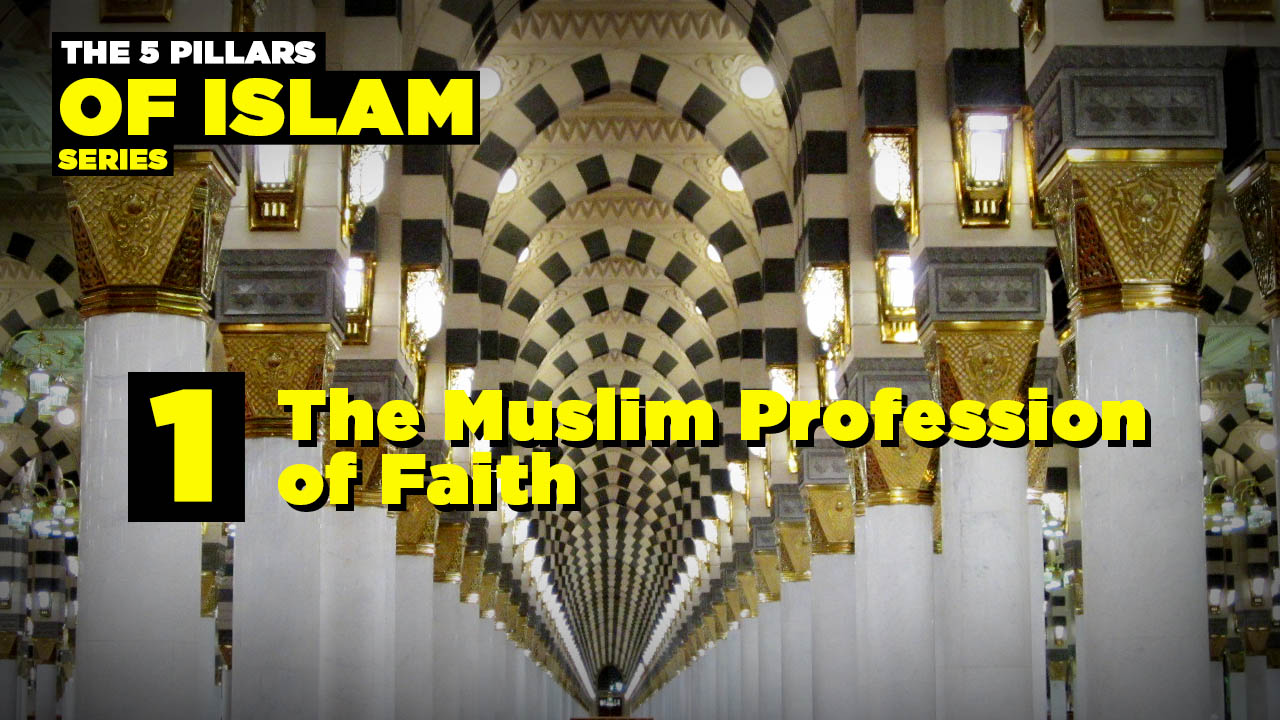 All practicing Muslims accept belief in the ‘Six Articles of Faith’ and are obliged to follow the ‘Five Pillars.’  They are:

The Shahada is the Muslim profession of faith and the first of the ‘Five Pillars’ of Islam.  The word shahada in Arabic means ‘testimony.’  The shahadais to testify to two things:

(a)  Nothing deserves worship except God (Allah).
(b)  Muhammad is the Messenger of God (Allah).

A Muslim is simply one who bears witness and testifies that “nothing deserves worship except God and Muhammad is the messenger of God.” One becomes a Muslim by making this simple declaration.

It must be recited by every Muslim at least once in a lifetime with a full understanding of its meaning and with an assent of the heart.  Muslims say this when they wake up in the morning, and before they go to sleep at night.  It is repeated five times in the call to prayer in every mosque.  A person who utters the shahada as their last words in this life has been promised Paradise.

Many people ignorant of Islam have misconceived notions about the Allah, used by Muslims to denote God. Allah is the proper name for God in Arabic, just as “Elah”, or often “Elohim”, is the proper name for God in Aramaic mentioned in the Old Testament.  Allah is also His personal name in Islam, as“YHWH” is His personal name in Judaism. However, rather than the specific Hebrew denotation of “YHWH” as “He Who Is“, in Arabic Allah denotes the aspect of being “The One True Deity worthy of all worship”.  Arabic speaking Jews and Christians also refer to the Supreme Being as Allah.

(a)  Nothing deserves worship except God (Allah).

The first part of this testimony states that God has the exclusive right to be worshipped inwardly and outwardly, by one’s heart and limbs.  In Islamic doctrine, not only can no one be worshipped apart from Him, absolutely no one else can be worshipped along with Him.  He has no partners or associates in worship.  Worship, in its comprehensive sense and all its aspects, is for Him alone.  God’s right to be worshipped is the essential meaning of Islam’s testimony of faith: Lā ‘ilāha ‘illā Allāh.  A person becomes Muslim by testifying to the divine right to worship.  It is the crux of Islamic belief in God, even all of Islam.  It is considered the central message of all prophets and messengers sent by God – the message of Abraham, Isaac, Ishmael, Moses, the Hebrew prophets, Jesus, and Muhammad, may the mercy and blessings of God be upon them.  For instance, Moses declared:

Jesus repeated the same message 1500 years later when he said:

Finally, the call of Muhammad, some 600 years after Jesus, reverberated across the hills of Mecca, ‘And your God is One God: there is no god but He.’(Quran 2:163).  They all declared clearly:

(b)  Muhammad is the Messenger of God (Allah).

Muhammad was born in Mecca in Arabia in the year 570 CE.  His ancestry goes back to Ishmael, a son of Prophet Abraham.  The second part of the confession of faith asserts that he is not only a prophet but also a messenger of God, a higher role also played by Moses and Jesus before him.  Like all prophets before him, he was a human being, but chosen by God to convey His message to all humanity rather than one tribe or nation from among the many that exist.  For Muslims, Muhammad brought the last and final revelation.  In accepting Muhammad as the “last of the prophets,” they believe that his prophecy confirms and completes all of the revealed messages, beginning with that of Adam.  In addition, Muhammad serves as the preeminent role model through his life example.  The believer’s effort to follow Muhammad’s example reflects the emphasis of Islam on practice and action.