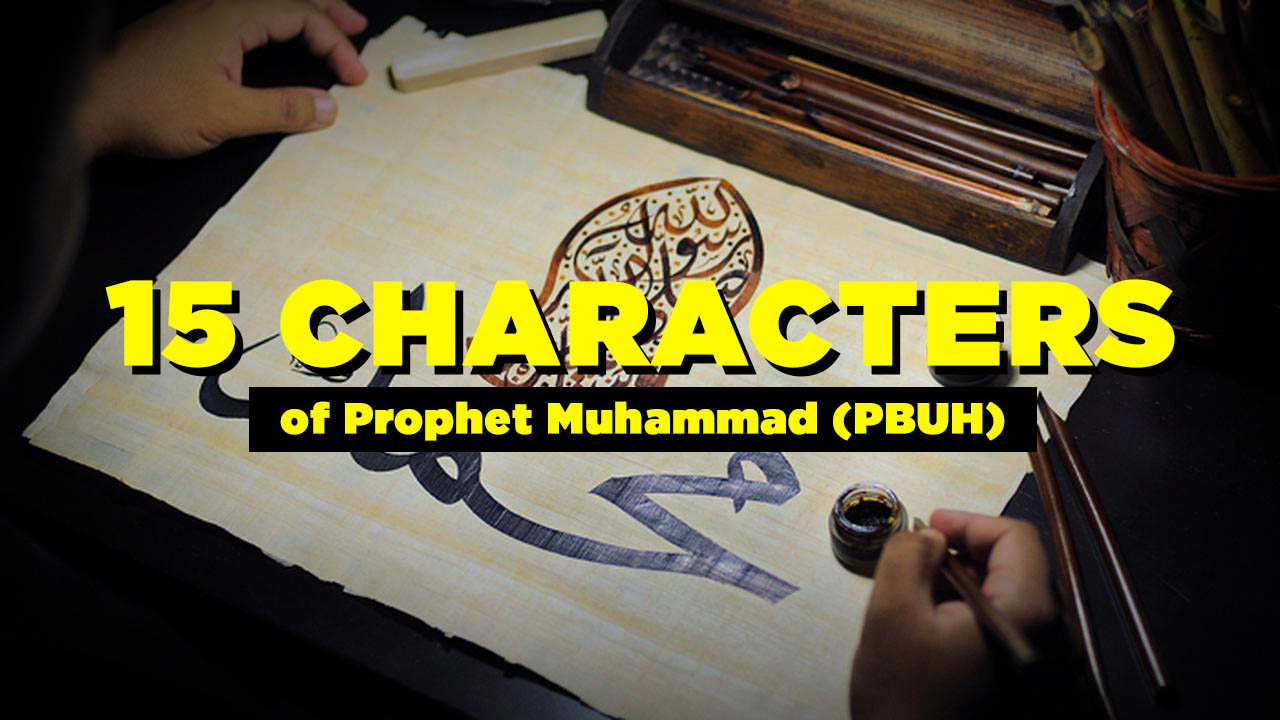 Posted in Islamic Knowledge By admin On December 24, 2014

If there is any personality that has lived on the face of this earth who was complete in every regard and the life of whom can serve as a beacon of guidance for people of every walk of life, that personality would undeniably be the personality of Muhammad (PBUH). Muslims follow Him because of Him being the Prophet as their religion and those who do not follow Islam also hold Him at a higher pedestal when it comes to human character.

Prophet Muhammad (PBUH) was born in Saudi Arabia in the city of Makkah about 1400 years ago. Since then the world has not seen the likes of Him in every regard and the study of human history shows that there have been none better than Him before Him as well.

The key factor that brings reverence and respect to Prophet Muhammad (PBUH) in both the Islamic and the non-Islamic circles is His character. He was the best in character and He also said about in one of His hadiths in the following way:

“God has sent me to perfect good manners and to do good deeds.” (Bukhari)

The lines below discuss some major character traits of Prophet (PBUH) that every Muslim should spread as much as possible.

Prophet (PBUH) as selfless as a person could be in life. All his undertakings and motives were just to fulfill the order of Allah and He did not undertake any action out of His personal desire and will. He lived everyday of His life for the sake of Allah and everything which He did was for the Almighty. The extent of His selflessness can be seen from the example of His preaching in the valley of Taif, where people lead naughty children to throw stones at Him while He was preaching. He had to run for His life and He was all covered in blood. But still He did not complain to Allah about Him, rather one of His companions narrates:

“The Prophet (PBUH) resembled a Prophet who was harmed by His people. He wiped the blood from His face and said: ‘O God! Forgive my people, for they know not!” (Bukhari)

Such is the selflessness in His character and every moment of His life was for the sake of Allah and spreading His message.

Prophet (PBUH) was the epitome of good manners. Every action that He undertook in life represented the highest morals and manners that a person could exhibit. He was an Ideal being in terms of manners and ethics, the likes of which the world has not seen. As one of His companions notes about His manners:

“The Prophet (PBUH) did not swear at anyone, nor was He rude, nor did He curse anyone. If He desired to reprimand someone, He would say: ‘What is wrong with him, may dust be cast in his face!” (Bukhari)

Thus if a Muslim is to give an example of the manners of someone, there would be none more suitable than Muhammad (PBUH).

People think that being a religious leader of Islam, Prophet (PBUH) had nothing to do with humor, rather He was all strictness and stringency. This perception is wrong, as Prophet (PBUH) was the one with the finest sense of humor, the likes of which again cannot be seen in anyone. His sense of humor was not vulgar in any sense or anything that would debase or make fun of someone, rather it was fine. Anas (RA) reports such an example by saying:

“Let us go to resolve the situation and make peace between them.” (Bukhari)

Thus, Muslims should spread His message of peace by giving examples out of the actions He undertook to ensure peace.

Prophet (PBUH) always treated kids with kindness and mercy. He always enjoyed their company and played with them to make them happy. One such example can be seen from His life when He used to say to kids:

So they used to race and fall on His back and chest. (Ahmad)

This shows His treatment towards kids and there are countless other examples in His lifetime where He commanded parents to be loving and caring towards their children.

Generosity is another hallmark of the personality of Muhammad (PBUH). He was the most generous person there could ever be. He preferred others over Himself and always fulfilled the needs of anyone who came to Him to ask for something. One of His companions notes:

“The Prophet (PBUH) did not refuse to give anything which He had to someone if he asked for it.” (Bukhari)

His generosity is something that Muslims should aspire to and spread the examples of His generosity to other people as well so that the world could become a better place.

Another allegation against Islam is that it is a religion that oppresses women, therefore, being the bringer of the religion, Muhammad (PBUH) is also attributed with women oppressing attributes. This perception is also wrong, because Prophet (PBUH) was very caring of the rights of the women and commended His followers to give special treatment to women by giving them respect and equal rights that they ought to have. In one of His hadiths He said:

“Whoever (brings up) two girls till they come of age, will be in the next world along with me, like my two fingers joining each other.” (Abu Dawud)

If He were an oppressor of women, He could have simply mentioned male orphan children, however, He gave preference to raising up of female children. This shows the care He had for women and their rights.

Another misconception is that Prophet (PBUH) would be someone who would always be harsh and strict on the people He interacted with. It is also a wrong perception because Prophet (PBUH) was the most pleasant person. He would greet everyone with a smile and always spoke to people with gentleness. His companion said about Him:

“I have never seen a man who smiled as much as the Messenger of Allah.” (Tirmidhi)

This shows that the personality of Prophet Muhammad (PBUH) was pleasant and gentle. A person who would smile most of the times ought to leave a good impression on people, and wherever He would go He ought to have spread love and pleasantness.

Prophet Muhammad (PBUH) did not just love who were around Him, nor did He only loved those who were related to Him, rather He considered the entire society. In society, He was especially considerate of orphans and would commend His followers to take special care of the orphans as they did not have parents to look after them. In one of His hadiths, He said:

Muslims must take a leaf out of His treatment of orphans and treat the orphans fairly and wherever one sees the orphans being oppressed, a Muslim should raise voice for it and stop it from happening.

Prophet (PBUH) is the best and the highest among people, however, whilst all the greatness and grandeur, He was cooperative towards people and helped others in doing the chores in any way He could help them. He never treated Himself as someone special, rather He would mix with common people and cooperate with them in any way He could. As one of His companion narrates regarding the battle of Trench:

“I saw the Messenger of Allah on the Day of the Trench carrying dirt (that was dug from the trench) until His chest was covered with dirt.” (Bukhari)

Thus, a Muslim must also not value status or rank, rather be helping towards people and give his or her fair share in the efforts that all of the people are putting.

Perhaps Muhammad (PBUH) was the first animal rights activist on the face of this earth who raised voice for the fair treatment of animal. He told people that animals were also creation of Allah and they deserved to be treated fairly, instead of being harsh, strict and ignorant towards them. Hazrat Aisha (RA) narrated:

“I once found difficulty in riding a horse, so I kept reining it in repeatedly. The Prophet (PBUH) then said, ‘You must have gentleness.’” (Muslim)

Ergo, Muslims should learn from His treatment of animals and should try being as gentle and as considerate towards animals as possible and treat them fairly.

A person who is so selfless that He would give anything that He had to anyone who asked for it and would do everything for the sake of Allah, it is quite natural that person has little or no concern with the worldly possessions. Prophet Muhammad (PBUH) did not want anything of this world, rather whatever He had He spent it on other people and helped them solve their material problems and issues. Regarding this attribute of His personality, one of His companions notes:

“The Messenger of Allah did not leave any gold or silver currency, or a slave, male or female, after his death. He only left behind his white mule, his weapons and a piece of land which He declared as charity.” (Bukhari)

Prophet (PBUH) was the Prophet of Allah, the leader of Islam however, when He passed away all He left was nothing as mentioned in the above hadith. Therefore, one can realize the disconcert He had for the worldly possessions and material things.

Another striking personality attribute of Prophet Muhammad (PBUH) is His modesty. He was the modest of all and never encouraged any kind of vulgarity, rather He was bashful and strongly encouraged modesty in His followers. In one of His hadiths, He said:

“Modesty is a part of teachings of the previous Prophets and anyone who lacks it is most likely to do whatever he likes.” (Reported by Abdullah ibn Maslamah)

Thus, modesty is imperative to Islam and Prophet (PBUH) being a living and breathing Islam ascertains that He was modest in every respect.

Whether it be animals, women, children, orphans, enemies, fellow Muslims, followers, elders, or it be anyone in the society, for everyone of them Prophet Muhammad (PBUH) was considerate. He would love children and orphans, He would treat animals fairly, He would give women their rights, He would respect the elders, He would provide what people asked of Him, thus He was considerate to everyone without any discrimination. Prophet (PBUH) said in a hadith:

“I stand up for prayer intending to prolong it. In the meantime I hear the wailing of a baby and I have to shorten my prayer, being apprehensive lest my recitation of a long verse may tell upon the baby’s mother.” (Bukhari)

“The Prophet (PBUH) was a person of average height. His shoulder were wide. His hair reached his earlobes. Once I saw Him adorned in a red garment; I never saw anything more beautiful than Him.” (Bukhari)

In a nutshell, no matter whichever walk of life it is, whatever situation of life it is, a Muslim is to turn towards the personality of Muhammad (PBUH) and find that particular piece of guidance from it. Muslims must spread the life of Prophet (PBUH) because it is not only good for Muslims, rather the goodwill that comes from it has a universal appeal and will help make the world a better place.