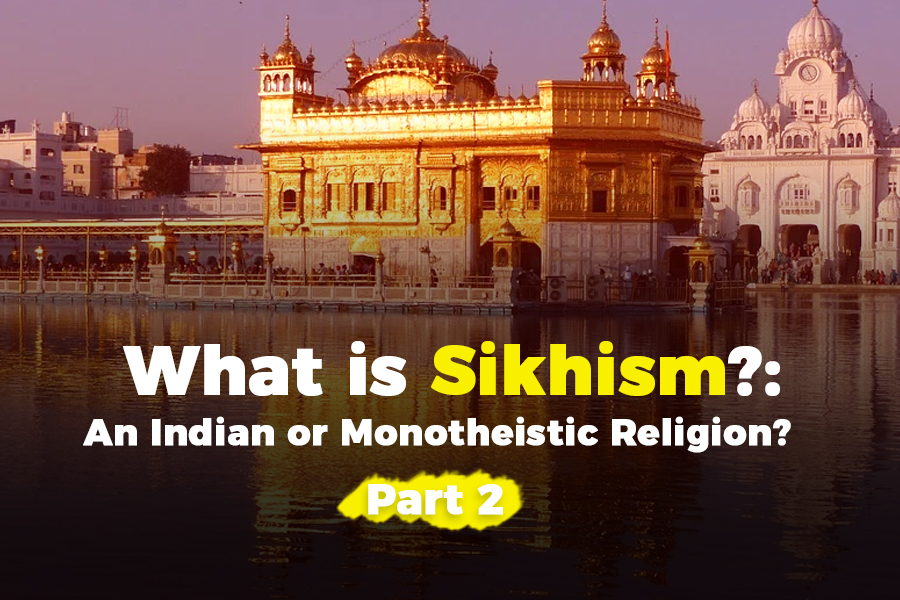 Sikhism is known as one of the Indian religions along with Hinduism and Buddhism, which we have discussed, and Jainism.  These four religions share certain key concepts that are interpreted slightly differently by each group or sub group.  They are all linked by a belief in karma, and the concept of reincarnation.  In Hinduism the soul, in many different forms repeatedly returns until it reunites with the source.  In Buddhism the concept is different and is referred to as rebirth, there is no unchanging or eternal soul; instead it is a series of separate lifetimes from conception to death.

Sikhism accepts the Hindu belief in karma and reincarnation but preaches a simple way of ending the cycle, by living a disciplined life.  Sikhs believe that through the grace of God and by constantly contemplating upon and repeating His name one can be liberated from the cycle of birth and death.  Guru Nanak explained to his followers that birth is due to Karma but liberation is due to God’s grace.  Guru Nanak taught that salvation does not mean entering paradise after a last judgment, but a union and absorption into God, sometimes referred to as the True Name.

Sikhism is essentially a monotheistic religion and for that reason it has more in common with Islam then either Hinduism or Buddhism, however, as we will discover, there are glaring differences in the concept of God and in the basic belief system.

Sikhs use many names to refer to God, including those from other faiths such as Rama or Allah.  A commonly used name is Waheguru which means wonderful Lord.  A Sikh also believes that God is shapeless, timeless, and sightless and that before creation, all that existed was God and His hukam (will or order).  They use the numeral 1 to signify the universality of God.  Guru Nanak said that God is omnipresent and visible everywhere to the spiritually awakened.  He stressed that God must be seen from heart of a human being; meaning devotees must meditate in order to progress towards enlightenment.

He created all and He Himself watches over us… (Guru Granth Sahib Page 38, Line 9)

However Sikhism states that God is in everything and everywhere, a concept rejected by Islam that sounds similar to the Hindu notion of God.  Sikhism though makes it very clear that they too deny the Hindu concept of God, and demi gods.  Islam states categorically that God is not everywhere; rather He is above the heavens and close to His creation through His knowledge.

Islam is a religion revealed for all places, all people and all times.  Muslims believe that the Quran is the last revealed book and that Prophet Muhammad is the final Prophet, God’s final message to humankind was revealed to him.  Therefore Islam rejects out rightly the notion that the Guru Granth Sahib is revelation from God.  Sikhs wrote their own scripture based upon their interpretation of certain ideas taught in Hinduism and Islam.  They also completely rejected some of the Islamic and Hindu teachings to come up with an interesting combination of both Hindu and Islamic theology.

There may be some similarities but it is the differences that expose the incompatibility of Islam and Sikhism.  These include the fact that Sikhs are prohibited from eating ritually slaughtered meat (halal), Sikhs do not believe in pilgrimages whereas the pilgrimage to Mecca (Hajj) is a pillar of Islam, and Sikhs cremate their dead while Muslims are buried.

Sikhism denies the reality of angels and demons, both of which figure prominently in Islamic belief.  There is no concept of divine reward and punishment such as Heaven and Hell, Sikhs believe, like Hindus and Buddhists, that karma determines whether or not a person finally reaches unity with God, however, as already stated, they reject the Hindu belief in incarnations (avatars) of God, believing instead that there is only one God who makes His will known through the Gurus.

Guru Nanak was a religious reformer not the founder of an entirely new religion.  “While Sikhism’s origins led the gurus to adopt some of the beliefs of Islam and Hinduism, they also led them to reject many of them.  The goal was to show a path to enlightenment which was available to all, regardless of caste, sex, or other externals, and in so doing they set forth a religion which has some general similarities to Islam but is really quite distinctive.  “[1]