Why shall Allah punish non-Muslims and some Muslims in hell? – Ask A Muslim Skip to content 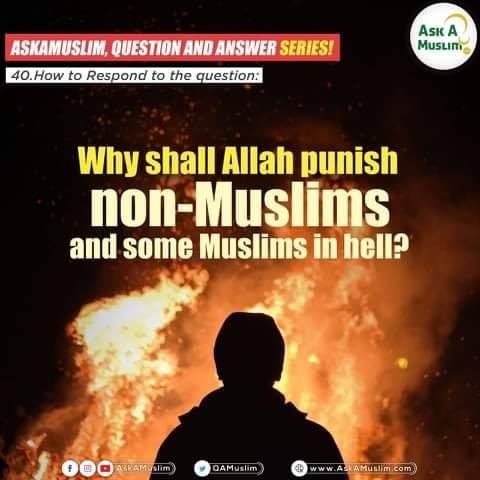 Firstly, as for Muslims sins differ. There are two types. Major sins and minor sins. Allah may might could and can forgive all sins except that you come with monotheism to him. You confess strict monotheism to Him alone.

If you die applying it in your life

Allah will for sure forgive you

The problem is when one is so called Muslim by name only. He does shirk. And adds to that major sins like wine fornication theft slandering backbiting etc

You still need practice of monotheism

One should work and he is led to his destiney not sleep. We will add here that those who are punished unfortunately oppressed people

For Allah it is easy because He just had on us one single condition. Which is to assign no partner to Him

That is the right of Allah

However the rights of men is difficult

Messenger of Allah (ﷺ) said, “Do you know who is the bankrupt?” They said: “The bankrupt among us is one who has neither money with him nor any property”. He said, “The real bankrupt of my Ummah would be he who would come on the Day of Resurrection with Salat, Saum and Sadaqah (charity), (but he will find himself bankrupt on that day as he will have exhausted the good deeds) because he reviled others, brought calumny against others, unlawfully devoured the wealth of others, shed the blood of others and beat others; so his good deeds would be credited to the account of those (who suffered at his hand). If his good deeds fall short to clear the account, their sins would be entered in his account and he would be thrown in the (Hell) Fire”.
●[Muslim]

In genral there are two rights as you can see

Both should be fulfilled

And they are complementary

It must be appreciated that God is not only a merciful God but also a just God and His justice also extends to just retribution.

It is only correct therefore, that one expects to be recompensed for what they have earned which is the fundamental teachingss of the Quran.

The Quran at many places alludes to the ‘abode of the sinners’ as a multifaceted place (15.43-44)
which is geared to fit the numerous levels of crimes of the sinners. It is not a place where every sinner will be given the same punishment or necessarily of hellfire. God informs the reader that not an atom’s weight of injustice will occur (4.40).

🌱🌱Secondly, as for non Muslims
All punishment will be in exact accordance to the measure of the evil deed of the sinner. punishment is proportional to the level of clarity of the message that is reaching them. If they continue to reject, they will be classed as ‘Kaffir’ (Those that deny the truth once it has reached them with utmost clarity) and the punishment would potentially be severe.

Pharaoh is such an example, who denied all the signs that he received from the Prophets of God (Prophet Moses and Aaron pbut). Pharaoh will be punished with a most severe burning and roasting in the fire of hell because he denied the truth when it reached him until he came to his earthly demise (40.46).

At this point, even his shahada (Testimony) of God (10.90) was deemed unacceptable.

He has been rightly cited as an example befitting the severest of punishments. we will all be recompensed fully for what we have done in terms of evil. Every hidden thought will be enquired into and searched out (86.9), every little deed will be laid out bare (99.7-8)

This should keep us humble and always seeking God’s mercy and His guidance belief is a test so he failed in it life is a test and Allah gave us the mind right or wrong good or bad if you fail to pass an exam in this life you will never be accepted as a qualified in hereafter the same thing Hereafter is not like here though it has its own rules given and clarified for us in Quran if u want to follow them u are the winner and u have nothing to lose The life of this world is a test (Al-Mulk 67: 2)

Before putting man in the test of the life of this world, God gave us the option to accept or avoid the responsibility of taking this test, fully clarifying the consequences of our success and/or failure.

Attracted by the unimaginable rewards, man accepted the responsibility and consented to take the test and face the consequent results
●(Al-Ahzaab 33: 72).

you are a servant for a master who gave you everything the disbelievers shall be punished permanently in the Hellfire because of their resolve and persistence in holding on to disbelief throughout their lives; had they lived perpetually, they would have determinedly retained their disbelief. Allaah, The Exalted, says:

{But what they concealed before has [now] appeared to them. And even if they were returned, they would return to that which they were forbidden; and indeed, they are liars.} [Quran 6:28]

it is impermissible to ascribe injustice to Allaah by claiming that justice entails not punishing the disbelievers permanently for their disbelief and that they should be punished for a limited time and then be caused to fall into non-existence instead (of eternal punishment in Hellfire).

Someone else may argue that Allaah, The Exalted, does not have the right to punish them in the first place, and another might ask why Allaah created them if He intends to punish them, – endless misconceptions would be raised in this regard. Hence, it is necessary for the Muslim to rely on the religious texts in the Quran and the Sunnah instead of following such misconceptions what if you die and find that hell awaiting you?

Temember you are his servant not his master

who are you to oppose to the All Just God

♦️♦️♦️Therefore the question why will Allah punish non Muslims or the Muslim sinners!!! Is irrational

Your question is ILLOGICAL!

IT’S LIKE SAYING I WANT PROMOTION WITHOUT SCHOOL OR EXAMS

You will never get any CERTIFICATES without studying and hardships

🗣🤔If you say Allah didn’t guide me

Showing the way (Hidaya dalaliya) is Guidance to exhort people to do good by providing them evidences and explanations.

It is in this sense that the Messenger of Allah (sallallaahu ‘alayhi wa sallam) and all other Messengers (peace be upon them) were guides.

2- success in following the way

Guidance to accept Islam and do good deeds.

This Guidance is only for Allah and no one else.

This type of Hidaayah (Guidance) is through information or knowledge which someone uses to guide others to the right way, to direct them, or show them right from wrong, to distinguish the right path from the wrong past.

Everyone has the potential or ability to guide or direct other people by their knowledge.

It is the way of the Prophets and Messengers (Alaihimus-Salaam), as well as their followers, the scholars and the callers who call to the Way of Allah.

Allah, the Most High, confirms this type of Hidaayah for the Prophet  in the Qur’an:

🗣2- at-Tawfeeq (Success in Following the Way)

This type of Hidaayah (Guidance) is the ability to guide a person in their actions so that they will be successful in doing that which is pleasing to Allah and earning His Paradise.

Hidaayah at-Tawfeeq is the exclusive right of Allaah, as it is only Allah that can guide a person in this way that guarantees for him the success of entering the Paradise.

Allah, the Most High, negates this type of Hidaayah for the Prophet  in the Qur’an:

“Verily you (O Muhammad) guide not whom you like, but Allah guides whom He wills. And He knows best those who are the guided.” [al-Qasas 28:56]

The responsibility of the people is merely to show others the way.

However, the guidance which guarantees reaching the destination (i.e. al-Jannah), or that one will be successful in dying on the right path, worshipping Allah Alone – this is something that is with Allah Alone, and which no human being has any control over.

♦️First guidance
Allah gave us everything eyes ears universe to ponder on. But as for helping us.. it’s up to you to look for it

He went help you if you don’t want it

Allah says those who seek guidance Allah helps them

👇🏻
47:17) And those who are guided – He increases them in guidance and gives them their righteousness.

♦️Second guidance
Yet when Allah says Allah does not guide the wrongdoers i.e: the sustainability is not given to them because they don’t like it

👇🏻
41:17
As for the Thamood people, We showed them the right path, but then they preferred blindness to guidance,

so the thunderbolt-type crushing and humiliating punishment seized them, because of what they had earned and deserved.

If you disbelieve, then verily, Allaah is not in need of you; He likes not disbelief for His slaves. And if you are grateful (by being believers), He is pleased therewith for you”

Allah showed us both ways

Verily, We have created man from Nutfah (drops) of mixed semen (sexual discharge of man and woman), in order to try him, so We made him hearer and seer.

Verily, We showed him the way, whether he be grateful or ungrateful.

Those people did not stop at rejecting the Messengers of their Lord; rather they conspired against them, to kill them or expel them from their lands. Allah, may He be exalted, says:

And those who disbelieved, said to their Messengers: ‘Surely, we shall drive you out of our land, or you shall return to our religion.’ So their Lord revealed to them: ‘Truly, We shall destroy the Zaalimoon (polytheists, disbelievers and wrongdoers)’”
●[Ibraaheem 14:13].

▪︎▪︎▪︎
Now how about people who haven’t heard of Islam

Will they be punished too?

The Condition of People who don’t Know About Islam

Allah Exalted be He says:
34:28
((We have not sent thee but as a universal (Messenger) to men, giving them glad tidings, and warning them (against sin), but most men understand not.))

People of Fatra will be tested in the Hereafter. There will be a person sent to order them to do good. If they obey him, they will enter the Paradise. If they refuse to obey, they will be punished with Hell.”

“And never do We punish any people until We send a Messenger (to make the Truth distinct from falsehood).” (QS. Al Isra/The Night Journey: 15)

There was also a similar hadith narrated by Abu Huraira but the last sentences were:

“Among them, those who obeyed and entered the Hell would feel the coolness of it and eventually be saved. Whereas those who hesitated to enter it, instead would be dragged into it.” (Narrated by Ahmad no. 16345).

By; Ask A Muslim