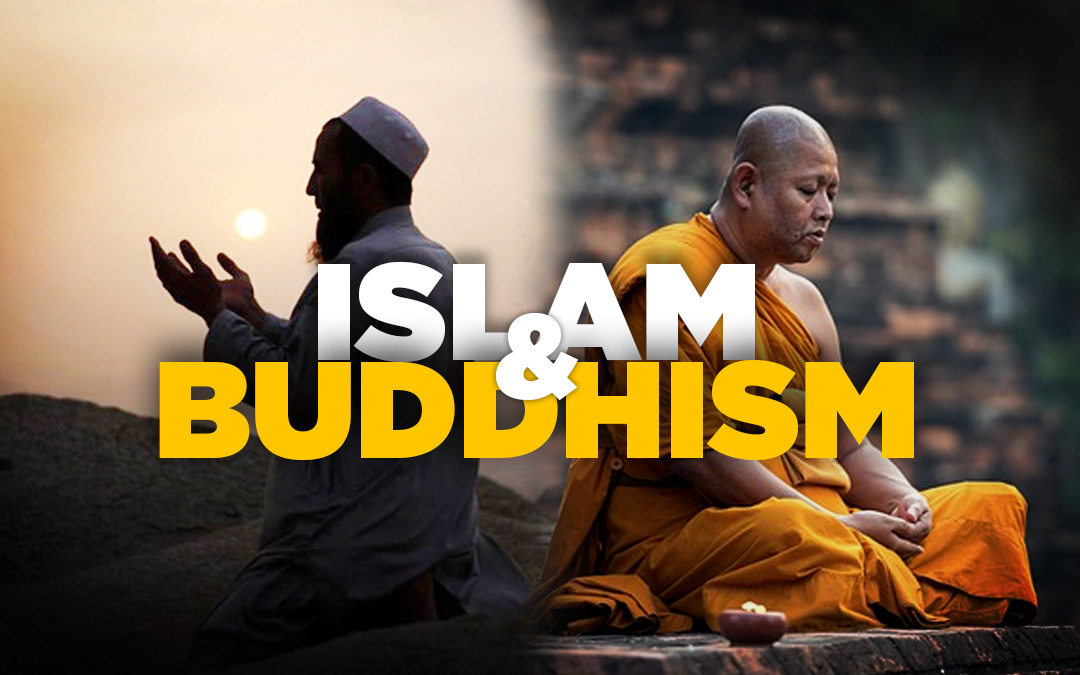 Historical criticism has proved that the original teachings of Buddha can never be known. It seems that Gautama Buddha’s teachings were memorized by his disciples. After Buddha’s death a council was held at Rajagaha so that the words of Buddha could be recited and agreed upon. There were differences of opinion and conflicting memories in the council. Opinion of Kayshapa and Ananda who were prominent disciples of Buddha were given preference. A hundred years later, a second council at Vesali was held. Only after 400 years, after the death of Buddha were his teachings and doctrines written down. Little attention was paid regarding its authenticity, genuineness and purity.

BUDDHIST SCRIPTURES
Buddhist Scriptures can be divided into:

A. Pali Literature
The most important of all Buddhist scriptures is the TRI-PITAKA which is in Pali text. It is supposed to be the earliest recorded Buddhist literature which was written in the 1st Century B.C. The Pali literature was monopolized by the Hinayana sect of Buddhism. The TRI-PITAKA or Three Baskets of law is composed of 3 books:

1. Vinaya Pitaka: ‘Rules of Conduct’: A book of discipline and mainly deals with rules of the order.
2. SuIa Pitaka: ‘Discourses’: A collection of sermons and discourses of Gautama Buddha and the incidents in his life. It is the most important Pitaka and consists of five divisions known as Nikayas.
3. Abhidhamma: ‘Analysis of Doctrine’: An analytical and logical elaboration of the first two pitakas that is known as Buddhist meta physicals. It contains analysis and exposition of Buddhist doctrine.

1. Maha vastu: ‘Sublime Story’: The most famous work in Sanskrit which has been restored from its Chinese translation. It consists of voluminous collection of legendary stories.
2. Lalitavistara: One of the holiest of the Sanskrit literature. It belongs to the first century C.E., 500 years after the death of Buddha. It contains the miracles which the superstition loving people have attributed to Buddha.

A. The Noble Truths:
The principal teachings of Gautama Buddha is what the Buddhists call the ‘Four Noble Truths’:

C. Nirvana:
Nirvana’ literally means “blowing out” or “extinction”. According to Buddhism, this is the ultimate goal of life and can be described in various words. It is a cessation of all sorrows, which can be achieved by removing desire by following the Eight Fold Path

PHILOSOPHY OF BUDDHISM IS SELF – A CONTRADICTORY

THE CONCEPT OF GOD IN BUDDHISM

Buddha was silent about the existence or non-existence of God. It may be that since India was drowned in idol worship and anthropomorphism that a sudden step to monotheism would have been drastic and hence Buddha may have chosen to remain silent on the issue of God. He did not deny the existence of God.
Buddha was once asked by a disciple whether God exists? He refused to reply. When pressed, he said that if you are suffering from a stomach ache would you concentrate on relieving the pain or studying the prescription of the physician. “It is not my business or yours to find out whether there is God – our business is to remove the sufferings of the world”. Buddhism provided Dhamma or the ‘impersonal law’ in place of God. However this could not satisfy the craving of human beings and the religion of self-help had to be converted into a religion of promise and hope. The Hinayana sect could not hold out any promise of external help to the people. The Mahayana sect taught that Buddha’s watchful and compassionate eyes are on all miserable beings, thus making a God out of Buddha. Many scholars consider the evolution of God within Buddhism as an effect of Hinduism.
Many Buddhists adopted the local god and thus the religion of ‘No-God’ was transformed into the religion of ‘Many-Gods’ – big and small, strong and weak and male and female. The ‘Man-God’ appears on earth in human form and incarnates from time to time. Buddha was against the caste- system prevalent in the Hindu society.

A. Buddha Prophesied The Advent Of A Maitreya
1. ChakkavaU Sinhnad SuIanta D. III, 76:
”There will arise in the world a Buddha named Maitreya (the benevolent one) a holy one, a supreme one, an enlightened one, endowed with wisdom in conduct, auspicious, knowing the universe:

“What he has realized by his own supernatural knowledge he will publish to this universe. He will preach his religion, glorious in its origin, glorious at its climax, glorious at the goal, in the spirit and the letter. He will proclaim a religious life, wholly perfect and thoroughly pure; even as I now preach my religion and a like life do proclaim. He will keep up the society of monks numbering many thousands, even as now I keep up a society of monks numbering many hundreds”.

”It is said that I am not an only Buddha upon whom the leadership and order is dependent. After me another Buddha maitreya of such and such virtues will come. I am now the leader of hundreds, he will be the leader of thousands.”

”Ananda said to the Blessed One, ‘Who shall teach us when thou art gone?’ And the Blessed one replied, ‘I am not the first Buddha who came upon the earth nor shall I be the last. In due time another Buddha will arise in the world, a holy one, a supremely enlightened one, endowed with wisdom in conduct, auspicious, knowing the universe, an incomparable leader of men, a master of angels and mortals. He will reveal to you the same eternal truths, which I have taught you. He will preach his religion, glorious in its origin, glorious at the climax and glorious at the goal. He will proclaim a religious life, wholly perfect and pure such as I now proclaim. His disciples will number many thousands while mine number many hundreds.’

Ananda said, ‘How shall we know him?’

The Blessed one replied, ‘He will be known as Maitreya’.”

The Sanskrit word ‘Maitreya’ or its equivalent in Pali ‘MePeyya’ means loving, compassionate, merciful and benevolent. It also means kindness and friendliness, sympathy, etc. One Arabic word which is equivalent to all these words is ‘Rahmat’. In Surah Al-Anbiya:

Prophet Muhammad (pbuh) was called the merciful, which is ‘Maitri’. The words Mercy and Merciful are mentioned in the Holy Qur’an no less than 409 times.

Every chapter of the Glorious Qur’an, except Chapter 9, i.e. Surah Taubah begins with the beautiful formula, ‘Bismillah Hir-Rahman Nir-Rahim’, which means ‘In the name of Allah, Most Gracious, Most Merciful’.

The Word Muhammad is also spelt as ‘Mahamet’ or ‘Mahomet’ and in various other ways in different languages. The word ‘Maho’ or ‘Maha’ in Pali and Sanskrit mean Great and Illustrious and ‘MePa’ means mercy. Therefore ‘Mahomet’ means ‘Great Mercy’.

B. Buddha’s Doctrine Was Esoteric And Exoteric:
Sacred Books of the East, volume 11, pg. 36 Maha-Parinibbana SuIa chapter 2 verse 32:
”I have preached the truth without making any distinction between exoteric and esoteric doctrine, for in respect of truths, Ananda, the Tathagata has no such thing as the closed fist of a teacher, who keeps something back”. Muhammad (pbuh) on the commandment of Almighty God delivered the message and doctrine without making any distinction between esoteric and exoteric. The Qur’an was recited in public in the days of the Prophet and is being done so till date. The Prophet had strictly forbidden the Muslims from hiding the doctrine.

C. Devoted Servitors Of The Buddhas:

The Servitor of Buddha was Ananda. Muhammad (pbuh) also had a servitor by the name Anas (r.a.) who was the son of Malik. Anas (r.a…) was presented to the Prophet by his parents. Anas (r.a…) relates: “My mother said to him, ‘Oh Messenger of God, here is your little servant’.” Further Anas relates, “I served him from the time I was 8 years old and the Prophet called me his son and his little beloved”. Anas (r.a…) stayed by the Prophet in peace and in war, in safety as well as in danger till the end of his life.

According to the Gospel of Buddha by Carus pg. 214:

“The Blessed one said, ‘There are two occasions on which a Tathagata’s appearance becomes clear and exceedingly bright. In the night Ananda, in which a Tathagata aEains to the supreme and perfect insight, and in the night in which he passes finally away in that ultra passing which leaves nothing whatever of his earthly existence to remain.’ “

According to Gautam Buddha, the followings are the six criteria for identifying a Buddha.
i) A Buddha attains supreme and perfect insight at night-time.
ii) On the occasion of his complete enlightenment he looks exceedingly bright
iii) A Buddha dies a natural death.
iv) He dies at night-time.
v) He looks exceedingly bright before his death.
vi) After his death a Buddha ceases to exist on earth.