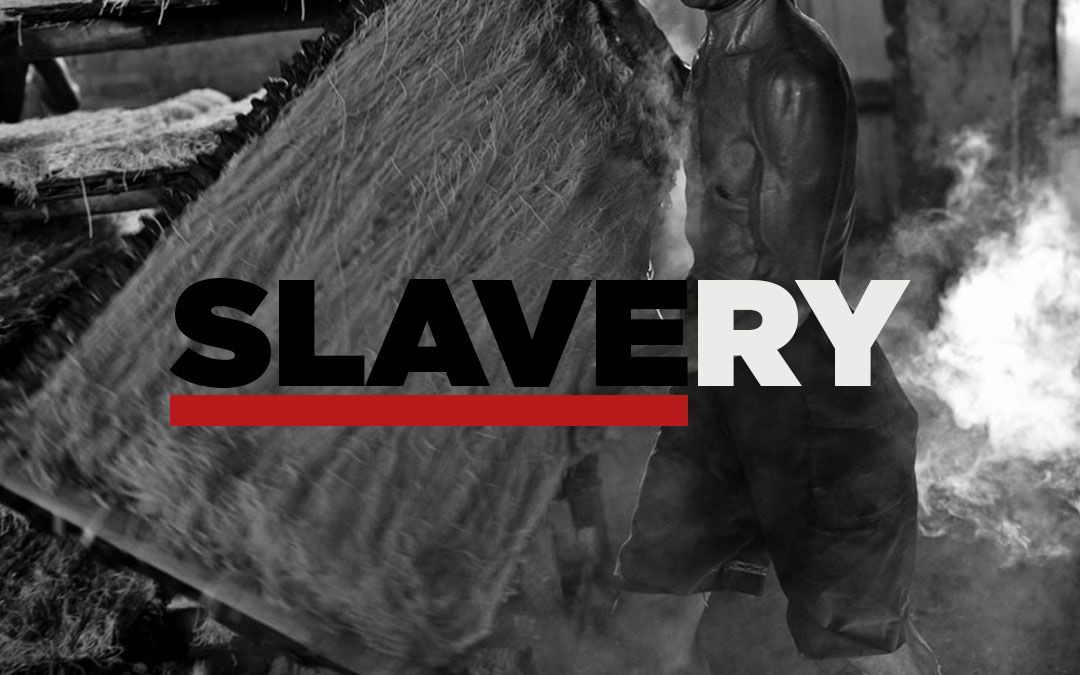 First, a knowledgeable Jew or Christian knows full-well that slavery is discussed in the Bible.  The Jewish law has much to say about slaves and their treatment.  This matter is not open to debate.  It is a fact every rabbi and trained pastor is aware of.

Second, just as the Jews and Christians do not discuss slavery in their teachings and sermons, Muslims do not teach much on the subject.  Why? The simple reason is that slavery as it existed in ancient times does not exist anymore.  To talk of “slavery in Islam” as if the Muslims practice it today is dishonesty.

Every country has laws against slavery.  However, experts say that slavery has taken a new form today that we shall discuss briefly.

The slave has three defining characteristics: his/her person is the property of another human being, his/her will is completely subject to his/her owner’s authority, and his/her labor is obtained by coercion.[1]  The international community condemned slavery as one of the worst human-rights violations, and the classic definition of slavery, set out in the Slavery Convention of 1926 is, “The status or condition of a person over whom any or all of the power attached to the right of ownership are exercised.”[2]  In 1956, several additional definitions of slavery were added: debt bondage, serfdom, the practice of forced marriage, transferring of wives, inheritance of wives and transfer of a child for purposes of exploitation.[3]

Roots of Slavery in the Bible

The Bible, in both Old and New Testaments, endorses slavery.[4]  The Bible existed before the Quran.

The Bible states that once Noah awoke and found out that one of his sons, Ham, had seen him naked.  Noah cursed his misbehaving son, Ham, and all the descendants of Canaan, the son of Ham, saying: ‘a slave of slaves shall you be to your brothers’ (Gen 9:25).  It must be noted that this story or anything similar to it is not found in the Quran or the teachings of Prophet Muhammad, may the mercy and blessings of God be upon him.

There is a long tradition among Christians that Ham is the father of the black races of Africa, Shem is the father of Semites (that includes the Arabs and Jews), and Japheth is the father of the while people.  Therefore, this passage of the Bible is considered to have made the white races supreme and the black race their servants.[5]  This “biblical passage became for many centuries a major justification for black slavery.”[6]  Not too long ago, in South Africa, the Reformed Church referred to this “curse” to support the “right” of whites to rule over blacks.

Leviticus 25:44-46 (one of the books of present day Torah, the Jewish scripture) is a key text used for the biblical justification of slavery.  It says that God told Jews, ‘you may also buy male and female slaves from among the nations…you may bequeath them to your sons after you, to inherit as a possession for ever.’

Most Christian theologians and scholars until late last century believed that the Bible sanctioned slavery.  The list includes Augustine, Aquinas, Luther, Calvin, and others.[9]

In 1835, the Presbyterian Synod of West Virginia attacked the movement to set slaves free, calling it a belief that goes against “the clearest authority of the word of God.’[10]

Old School (presbyterian) General Assembly Report of 1845 concluded that slavery was based on ‘some of the plainest declarations of the Word of God.’[11]

In 1861, a Jewish Rabbi, Dr.  M.J.  Raphall of New York, wrote a much publicized pamphlet entitled “The Bible View of Slavery” in defense of slavery.[12]

As late as 1957 John Murray of the Westminster Theological Seminary[13]  was still arguing that Bible allows for the institution of slavery and the past Christian scholars were correct in their understanding of the Bible.

Slavery in US Constitution

The Three-Fifths Compromise is found in Article 1, Section 2, Paragraph 3 of the US Constitution.  The 3/5’s Compromise enabled more masters to become lawmakers, even though the 3/5’s of the slave population counted, had no voice or vote in the democracy.

The American Civil War was fought, in part, over slavery.  During the war, President Abraham Lincoln issued the Emancipation Proclamation, which freed all slaves in rebel states.  The North’s victory in 1865 brought the end of legalized slavery throughout the United States.

Slavery as practiced in the old south took away any control from blacks over their own lives; they were to be slaves for life, their children were born into slavery, forbidden formal education, were harshly punished for small acts of disobedience, their families split as children were sold off, and women sexually exploited. The America’s race-based slave system was designed at every level to take away the humanity of the slave, relying on ideas taken from the domestication of animals.  Dehumanization had a special meaning for America’s slave system. In America the slaves were marked by the color of their skin. In this, America’s slave system was supported by American religion: the Bible informed Christians that slaves weren’t fully equal humans but descendants of Canaan, marked by God to be inferior and servants of others.[15]

“…between 14,000 and 17,500 people are trafficked into the United States annually, according to the US government, most forced into the sex trade, domestic servitude, or agricultural labor.  At any one time, between 52,000 and 87,000 are in bondage… according to the United Nations, profits from human trafficking rank it among the top three revenue earners for organized crime, after drugs and arms.”[19]

Slavery in Islamic Law with Some Historical Observations

“O mankind, indeed We have created you from a male (Adam) and a female (Eve) and made you into various families and tribes that you may know one another.  Indeed, the most honored of you in God’s sight is the most pious of you.” (Quran 49:13)

The Prophet of Islam declared,

‘All of you are from Adam and Adam was created from dust.’[1]

The principle that human beings are born free and slavery is accidental is accepted by all the scholars of Islam.  Few important consequences of this principle are:

2. A slave was granted respect and human dignity.

The very word “slave” in English has extremely negative connotations of barbaric treatment.  Compare it with how the Prophet of Mercy spoke about slaves 1400 years ago,

“Your slaves are your brothers! God has placed them in your care.  So, whose brother is under his care, he should feed him what he eats and dress him how he dresses.  And do not burden them beyond their capacities; but if you burden them (with an unbearable burden), then help them (by sharing their extra burden).”[3]

“When the servant of anyone amongst you prepares food for him and has undergone its hardship of heat and smoke, he should make him (the servant) sit along with him and make him eat (along with him), and if he does not do that, then he should spare some portion for him.”[4]

The Prophet of Mercy forbade hitting the slaves.  He declared that the atonement of hitting or slapping a slave is to set him free[5].

Moreover, a slave is not be addressed with hurtful words.  The Prophet of Mercy stated not to address them as, ‘My slave boy or my slave girl.” He said, “All of you are slaves of God!” Address them with, “O my young man, O my young lady!”[6]

Umar ibn al-Khattab, the second ruler-caliph of Islam, was so fond of Salim, a freed slave that he wished to appoint Salim to be the ruler-caliph if he were alive.  Salim used to lead the Muslims in prayer, which is considered an honor in Islamic tradition.

3. Islam did not initiate the system of slavery.  It existed in Judaism, Christianity, India, and China before Islam.

Since the earliest times, Islam had opened doors to free slaves and to eventually end slavery.  The Islamic paradigm did not ignore the realities of the world, nor did it endorse it.  Islam regulated it.  As Annemarie Schimmel, a German scholar, noted, “…therefore slavery is theoretically doomed to disappear with the expansion of Islam.”[7]

Shariah Law severely limited the channels in which the number of slaves could multiply.  The only source of slavery was captives of legitimate war and the children born to slave parents.  In case of war, the captives were not required to be enslaved.  The Muslim scripture laid other options of dealing with them as well:

After limiting the sources of new slaves, Islamic law dealt with the reality of the existing slaves.

4.  Islam granted equal religious rights to the free and the slave and in most civil matters.  Their special laws were to make their jobs easier.

Slaves were at the same footing of a freeman in terms of religious obligations, as well as reward and punishment from God.  A slave’s testimony was considered acceptable.  A slave had right to personal belongings and property.  Slaves were equal in retribution of blood-money.  They were to be helped to legally win their freedom if they so chose through a mechanism known as mukataba and tadbeer.  This mechanism is enshrined in the Muslim scripture by God in 24:33.

5.  Islam made freeing slaves an act of worship pleasing to God.

It set freeing of slaves as atonement of sins and for specific acts of transgression.  Muslims were encouraged to willingly set slaves free to release themselves from the torment of Hell Fire.  The state was also a source of setting the slaves free as Islamic Law dictates that zakah – obligatory charity given by wealthy Muslims to the state – is to be spend on setting slaves free among other things (Quran 9:60).

The issue of integration of freed slaves into the mainstream society has been discussed by some contemporary scholars.  The Islamic solution was to integrate them into the society by making them part of the tribes and families.  The system was known as “wala.” The Prophet of Islam said, ‘Freeing slaves is like establishing relations by blood.’[8]