The true message of Jesus 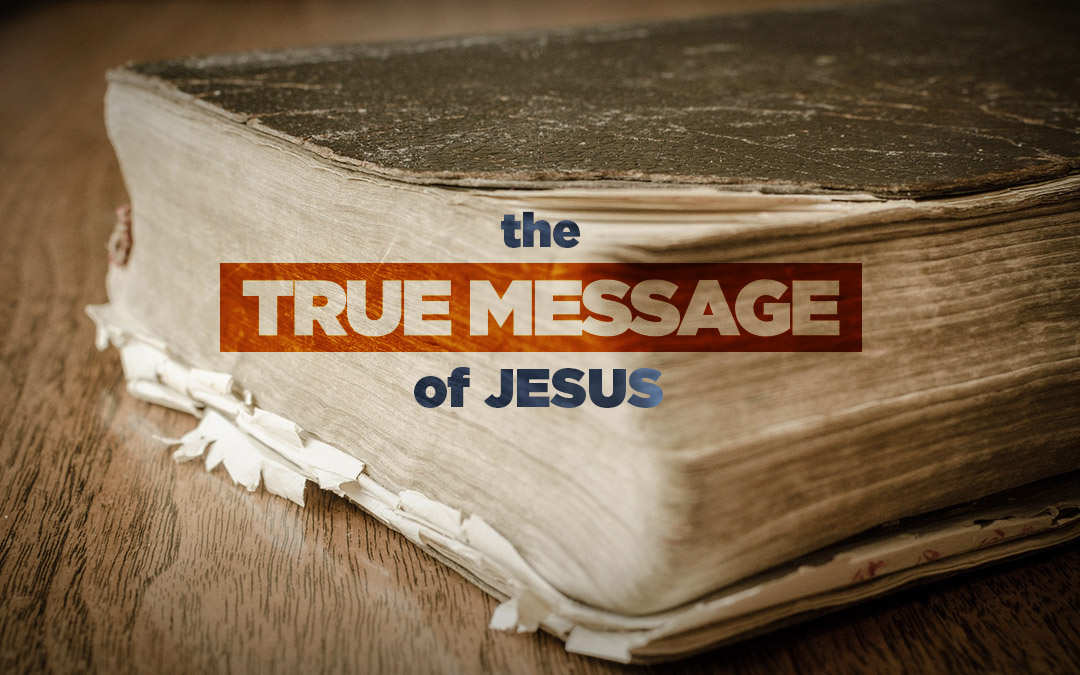 The second issue, ‘The Message of Jesus’, is perhaps the most important point to consider.  For, if Jesus was not God incarnate, but a prophet of God, the message which he brought from God is the essence of his mission.

The foundation of Jesus’ message was submission to the will of God, because that is the foundation of the religion which God prescribed for man since the beginning of time. God says in Chapter Aal ‘Imraan, the third chapter of the Qur‘aan, verse 19:

“Truly, the religion in the sight of Allaah is Islaam [submission].”

In Arabic, submission to God’s will is expressed by the word ‘Islaam’. In the Gospel according to Matthew 7:22, Jesus is quoted as saying: “Not everyone who says to me, ‘Lord, Lord,’ shall enter the kingdom of heaven, but he who does the will of my Father in heaven.” In this statement, Jesus places emphasis on “the will of the Father”,  submission of the human will to the will of God.  In John 5:30, it is narrated that Jesus also said: “I can do nothing on my own authority; as I hear, I judge; and my judgment is just, because I seek not my own will but the will of him who sent me.”

“Indeed, I did reveal the Torah in which was guidance and light, by which the prophets, who submitted to God’s will, judged (the Jews) … and whoever does not judge by what Allaah has revealed is a disbeliever,”

Jesus was also reported in the Gospel according to Matthew 19:16-17, to have made obedience to the divine laws the key to paradise: “16 Now behold, one came and said to him,“Good teacher, what good thing shall I do that I may have eternal life?” 17So he said to him, “Why do you call me good?  No one is good but One, that is, God. But if you want to enter into life, keep the commandments.”[114] Also in Matthew 5:19, Jesus Christ was reported to have insisted on strict obedience to the commandments saying, “Whoever therefore breaks one of the least of these commandments, and teaches men so, shall be called least in the kingdom of heaven; but whoever does and teaches them, he shall be called great in the kingdom of heaven.”

Divine law represents guidance for humankind in all walks of life. It defines right and wrong for them and offers human beings a complete system governing all of their affairs. The Creator alone knows best what is beneficial for His creation and what is not. Thus, the divine laws command and prohibit various acts and substances to protect the human spirit, the human body, and human society from harm. In order for human beings to fulfil their potential by living righteous lives, they need to worship God through obedience to His commandments.[115]

This was the religion conveyed in the message of Jesus; submission to the will of the one true God by obedience to His commandments.  Jesus stressed to his followers that his mission did not cancel the laws received by Prophet Moses. As the prophets who came after Moses maintained the law, so did Jesus. Chapter al-Maa’idah, verse 46 of the Qur’aan indicates that Jesus confirmed the Laws of the Torah in his message.

In Matthew 5:17-18, Jesus stated: “17 Think not that I have come to abolish the law and the [way of] the prophets; I have come not to abolish them but to fulfil them.18For, I say to you, till heaven and earth pass away, not an iota, not a dot, will pass from the law until all is accomplished.” However, Paul, who claimed to be a disciple of Jesus, systematically cancelled the laws.  In his letter to the Romans, chapter 7:6, he stated, “But now we are discharged from the law, dead to that which held us captive, so that we serve not under the old written code but in the new life of the Spirit.”

Jesus came as a prophet calling people to worship God alone, as the prophets before him did. God says in chapter an-Nahl (16):36, of the Qur‘aan:

“Surely, I have sent to every nation a messenger (saying): ‘Worship Allaah and avoid false gods.”

In Luke 3:8, the Devil asks Jesus to worship him, promising him the authority and glory of all of the kingdoms of this world, “And Jesus answered him, ‘It is written, You shall worship the Lord your God, and him only shall you serve.’ ”  Thus, the essence of the message of Jesus was that only God deserves to be worshipped and that the worship of anyone or anything besides God or along with God is false. Jesus not only called people to this message but he also practically demonstrated it for them by bowing down in prayer and worshipping God himself. In Mark 14:32, it states: “And they went to a place which was called Gethsemane; and he [Jesus] said to his disciples, ‘Sit here, while I pray.’ ” And in Luke 5:16, “But he withdrew to the wilderness and prayed.”

Jesus called them to worship the one true God who is unique in His qualities.  God does not have the attributes of His creation, nor does any creature share any of His attributes.  In Matthew 19:16-17, when the man called Prophet Jesus ‘good’, saying, “Good teacher, what good thing shall I do that I may have eternal life?” Prophet Jesus replied, “Why do you call me good? No one is  good  but  One, that is, God.” He denied the attribution of ‘infinite goodness’ or ‘perfect goodness’ to himself, and affirmed that this attribute belongs to Allaah alone.

The vast majority of Christians today pray to Jesus, claiming that he is God. The Philosophers among them claim that they are not worshipping Jesus the man, but God who was manifest in Jesus the man. This is also the rationale of pagans who bow down in worship to idols.  When a pagan philosopher is asked why he worships an idol which was made by human hands, he replies that he is not really worshipping the idol. Furthermore, he may claim that the idol is only a focal point for the presence of God, and thereby claim to be worshipping God who is manifest in the idol, and not the physical idol itself. There is little or no difference between that explanation and the answer given by Christians for worshipping Jesus. The origin of this deviation lies in the false belief that God is present in His creation. Such a belief justifies the worship of God’s creation.

Jesus’ message, which urged mankind to worship one God alone, became distorted after his departure. Later followers, beginning with Paul, turned that pure and simple message into a complicated trinitarian philosophy which justified the worship of Jesus, and then the worship of Jesus’ mother, Mary,[117] the angels[118] and the saints.  Catholics have a long list of saints to whom they turn in times of need. If something is lost, Saint Anthony of Thebes is prayed to in order to help find it.[119] St. Jude Thaddaeus is the patron saint of the impossible and is prayed to for intercession in incurable illnesses, unlikely marriages or the like. [120] The patron saint of travelers was Saint Christopher, to whom travelers used to pray for protection up until 1969, when he was officially struck off the list of saints by papal decree, after it was confirmed that he was fictitious. [121] Although he was officially crossed off the list of saints, there are many Catholics around the world today who are still praying to St. Christopher.

Worshipping ‘saints’ contradicts and corrupts the worship of One God; and it is in vain, because neither the living nor the dead can answer the prayers of mankind. The worship of God should not be shared with His creation in any way, shape or form.  In this regard, Allaah said the following in Chapter al-A ‘raaf (7):194:

“Surely, those whom you call on in prayer besides Allaah are slaves like yourselves.”

This was the message of Jesus Christ and all the prophets before him.  It was also the message of the last prophet, Muhammad—may peace and blessings be upon all of them.  Thus, if a Muslim or a person who calls himself a Muslim prays to a saint, he has stepped out of the bounds of Islaam. Islaam is not merely a belief, wherein one is only required to state that he or she believes that there is no God worthy of worship but Allaah and that Muhammad was the last of the messengers, in order to attain paradise.  This declaration of faith allows one who declares it to enter the doors of Islaam, but there are many acts which may contradict this declaration and expel the doer from Islaam as quickly as he or she came in. The most serious of those acts is praying to other than God.

Since Jesus’ religion, and that of all of the earlier prophets, was the religion of submission to God, known in Arabic as Islaam, his true followers should be called submitters to God, known in Arabic as Muslims. In Islaam, prayer is considered an act of worship. Prophet Muhammad (e) was reported to have said, “Supplication is an act of worship.”[122] Consequently, Muslims do not accept being called Mohammedans, as followers of Christ are called Christians and followers of Buddha are called Buddhists. Christians worship Christ and Buddhists worship Buddha. The term Mohammedans implies that Muslims worship Muhammad, which is not the case at all. In the Qur‘aan, God chose the name Muslim for all who truly follow the prophets. The name Muslim in Arabic means “one who submits to the will of God.”

Consequently, the essence of Jesus’ message was that man should worship God alone.  He should not be worshipped through his creation in any way. Consequently, His image cannot be painted, carved or drawn.  He is beyond human comprehension.