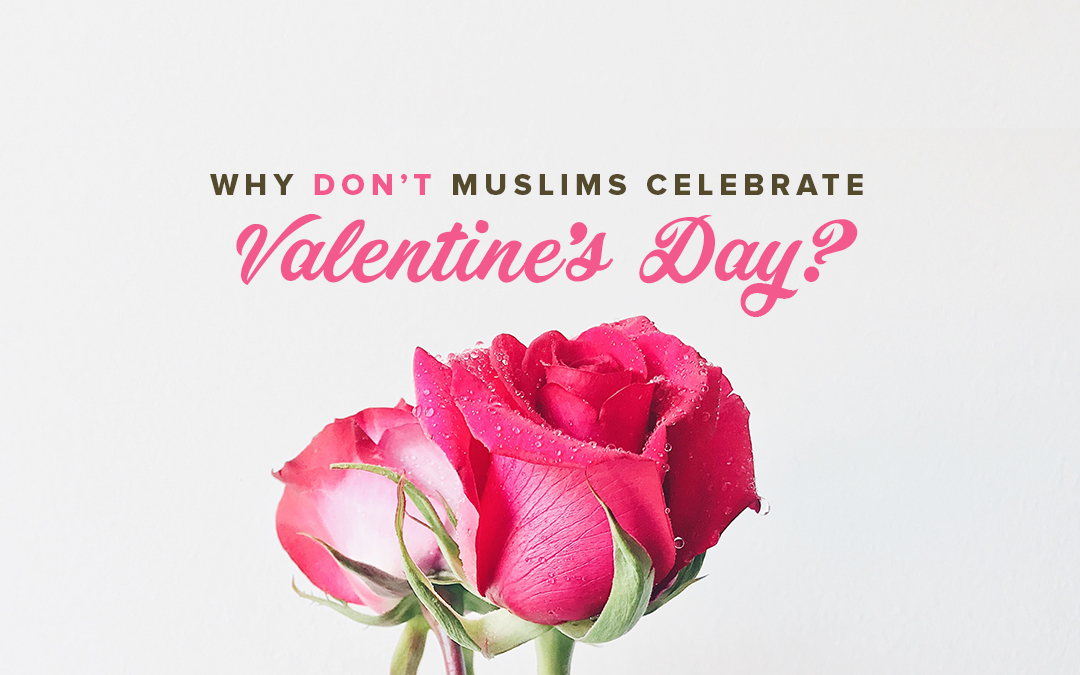 Short Answer: If you look into history and origins of Valentine Day, plus the values this celebration promotes today, the answer to your question will be very clear. Muslims don’t blindly follow the crowd when it comes to celebrations of any kind. Islam promotes love among people and the exchange of gifts is one way for love and good relations to increase in society but does not restrict the expression of this brotherly, sisterly, martial, or familial love to just one day a year.

Thank you for sending in your question to our website.

Islam is a way of life that encompasses and engulfs a Muslim’s complete life and self.

From the faith and belief that reside in their hearts, to their thoughts, to their outwards actions that are visible to others — all are affected by and based on the guidelines of Islam.

It is very important in Islam for a believer to ensure that there is no contradiction between their outward actions and their innate beliefs and faith.

Therefore, whether a Muslim is alone or in the public eye, they strive to unequivocally obey their Lord, Allah, by following His messenger, Prophet Muhammad (peace be upon him), at all times.

Islam is not merely a set of physical worship rituals, though these are important in their own right.

It is also a set of guidelines, responsibilities towards others, and rights, which impacts a Muslim’s social customs, interactions, and obligations.

The word “Muslim” means, “the one who submits (to God)”, hence, he or she gives preference to the unquestioning obedience and acquiescence to the commands of Allah sent to His messenger over and above the approval of Allah’s creation, and even above his or her own personal desires.

Allah has commanded Muslims to remain united, keep close community bonds with each other to form a strong, global brotherhood, and to not follow the ways of the disbelievers.

Hence, the conscientious Muslim is not a slave to passing trends and customs that have no basis in Islam.

Keeping all of the above in mind, it becomes clear that a Muslim does not follow the crowd when it comes to celebrations of any kind: he or she follows the Quran and the sunnah (way) of Prophet Muhammad.

Instead of thinking -why not? what’s the harm?- before following the crowd and their seasonal whims; a Muslim thinks- should I? Will Allah be pleased with this?

Whoever imitates a people is one of them. (Abu Dawud)

Consequently, Muslims do not celebrate any days, festivals, or seasonal celebrations that were not celebrated by the Prophet and his companions.

Furthermore, Valentine’s Day is a celebration that has no basis in anything worthwhile or noble.

Its origin lies in Roman history, purportedly connected to a “saint” called “Valentine”, who was sentenced to death on 14th February 270 CE.

It began as a pagan ritual started by Romans in the 4th century BC to honor their false god Lupercus.

The main attraction of this ritual was a lottery held to distribute young women to young men for “entertainment and pleasure” — until the next year’s lottery.

Romans continued to celebrate this until after they became Christians. (Source: Islamweb)

In this way, Valentine’s Day promotes adultery and promiscuous relationships, which undermine and jeopardize the sanctity of marriage and the stability of the family unit.

It leads to unnecessary expenditure, and promotes fornication, drinking, and immorality.

Lastly, this day compounds a sense of deprivation, loneliness, and low self-worth among those people who are single.

Islam prohibits dating and sex outside marriage, both of which Valentine’s Day encourages.

It is obvious, then, that a Muslim should not celebrate it.

On the other hand, Islam encourages strong bonds of love, community, and brotherhood and sisterhood among Muslims, and families, and does not restrict the expression of this brotherly, sisterly, martial, or familial love to just one day a year.

Giving gifts has also been encouraged in Islam, and once again, not restricted to just one day.

Any wise person, even a non-Muslim, who has witnessed life and its trials, will willingly and objectively attest to the absolute absurdity and superficial, flimsy foundation of Valentine’s Day.

Businesses, on the other hand, capitalize on this day to earn as much revenue as possible by offering customized products and services, hence the hoopla around it.

If we take the commercial aspect of Valentine’s Day out of the picture, this so-called “festival” does not have a single leg to stand on.

I hope this answers your question, Taneesha.

Salam and please stay in touch.