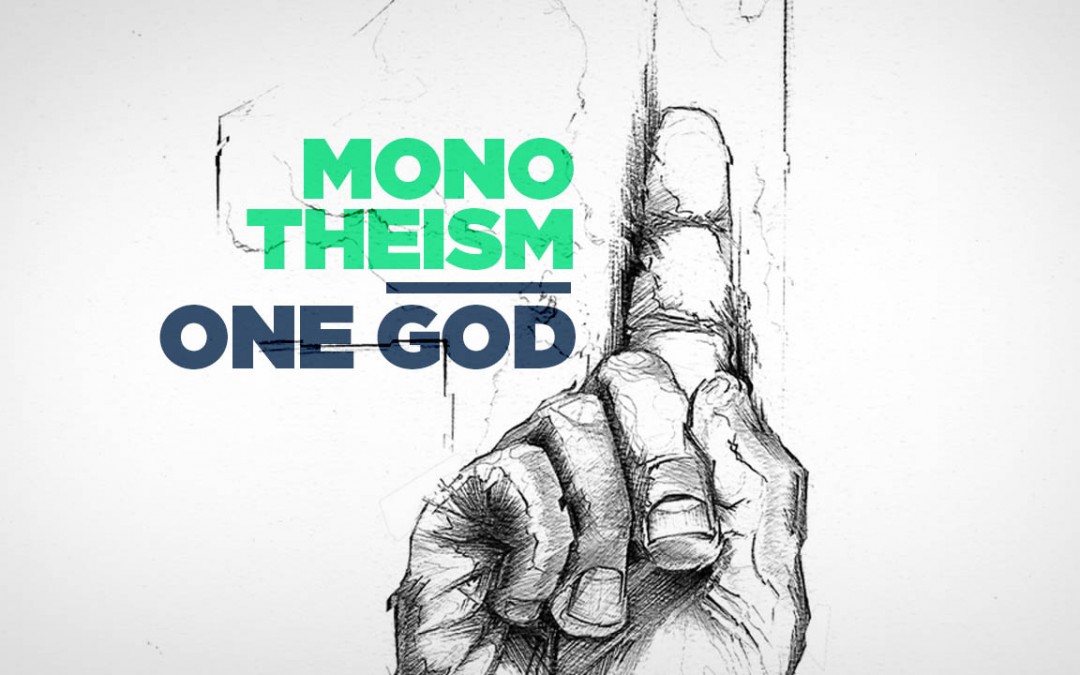 Muslims believe that there is only One God.  He alone is the Sustainer and Creator of the universe.  He is without partners, children, or associates. He is the Most Merciful, the Most Wise, and the Most Just.  He is the all hearer, all seer, and the all knowing.  He is the First , He is the Last.

“Say (O Muhammad), He is Allah, (the) One.  Allah-us-Samad (The Self-Sufficient Master, Whom all creatures need, He neither eats nor drinks).  He begets not, nor was He begotten; And there is none co-equal or comparable unto Him.” (Quran 112)

“He is the Originator of the heavens and the earth.  How can He have children when He has no wife?   He created all things and He is the All-Knower of everything.  Such is Allah, your Lord!  La ilaha illa Huwa (none has the right to be worshipped but He), the Creator of all things.  So worship Him (Alone), and He is the Trustee, Disposer of affairs, Guardian, over all things.  No vision can grasp Him, but His Grasp is over all vision.  He is the Most Subtle and Courteous, Well­ Acquainted with all things.” (Quran 6:101-103)

This belief is sometimes called Monotheism which is derived from the Greek words ‘monos’ meaning only and ‘theos’ meaning  god.  It is a relatively new word in the English language and it is used to denote a supreme being Who is all-powerful, the One who is responsible for life, the One who rewards or punishes.  Monotheism is directly opposed to Polytheism, which is belief in more than one god, and to Atheism, a  disbelief in all deities.

If we were to take into consideration the general meaning of the word ‘monotheism’  Judaism, Christianity, Islam   and  Zoroastrianism,  and some Hindu philosophies  could all be included. However it is, more commonplace to refer to Judaism, Christianity, and Islam  as the  three monotheistic religions and group them together; nonetheless, there are  glaring differences between Christianity and Islam.

The concept of a trinity inherent in most Christian denominations ostensibly includes aspects of plurality.  The belief that one God is some how three divinities (father, son, and holy spirit) contradicts the concept of Monotheism inherent in Islam, where the Oneness of God is unquestionable.  Some Christian groups, including those known as Unitarians believe that God is One and cannot be God and human at the same time.  They take the words of Jesus in John 17:3, “the One True God” literally.  However, the vast majority of Christians do not share this belief.

In the religion of Islam belief in One God, without partners or associates is essential.  It is the focal point of the religion and it is the essence of the Quran.  The Quran calls on humankind to worship God alone and to give up worshipping false gods or associates.  The Quran urges us to look at the wonders of creation and understand God’s greatness and power, and it speaks directly of His names, attributes, and actions.  The Quran commands us to reject anything that is worshipped instead of, or along with God.

“And I (God) created not the jinns and humankind except they should worship Me (Alone).” (Quran 51:56)

Islam is often referred to as  pure monotheism.  It is not adulterated with strange concepts or superstitions.  Belief in One God entails certainty.  Muslims  worship God alone, He has no partners, associates, or helpers.  Worship is directed solely to God, for He is the only One worthy of worship.  There is nothing greater than God Alone.

“Praise and thanks be to God, and peace be on His slaves whom He has chosen (for His Message)!  Is God better, or (all) that you ascribe as partners (to Him)?” (Of course, God is Better)

Is not He (better than your gods) Who created the heavens and the earth, and sends down for you water (rain) from the sky, whereby We cause to grow wonderful gardens full of beauty and delight?  It is not in your ability to cause the growth of their trees. Is there any god with God?  Nay, but they are a people who ascribe equals (to Him)!

Is not He (better than your gods) Who has made the earth as a fixed abode, and has placed rivers in its midst, and has placed firm mountains therein, and has set a barrier between the two seas (of salt and sweet water).Is there any  god with God?  Nay, but most of them know not.

Is not He (better than your gods) Who responds to the distressed one, when he calls Him, and Who removes the evil, and makes you inheritors of the earth, generations after generations. Is there any god with God?  Little is that you remember!

Is not He (better than your gods) Who guides you in the darkness of the land and the sea, and Who sends the winds as heralds of glad tidings, going before His Mercy (rain)?  Is there any god  with God?  High Exalted be God above all that they associate as partners (to Him)!

Is not He (better than your so-called gods) Who originates creation, and shall thereafter repeat it, and Who provides for you from heaven and earth?  Is there any god with God?  Say, “Bring forth your proofs, if you are truthful.” (Quran 27:59-64)

[1] The six pillars of faith are  belief  in God, His angels, His prophets and messengers, all His revealed books, the Day of Judgement, and divine decree.